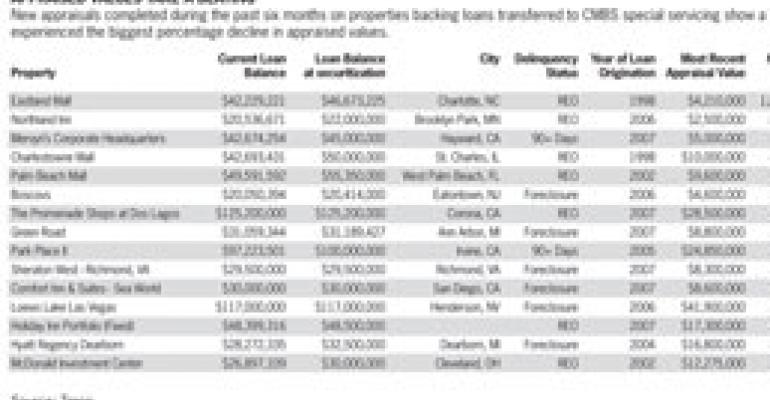 Special servicers face a daunting task in trying to resolve billions of dollars in troubled commercial real estate loans based on new research from Trepp LLC. Of the 1,125 CMBS loans on properties that were reappraised during the first half of this year, 986 recorded loan-to-value ratios of greater than 100% largely due to falling valuations.

It’s a cause for concern because the unpaid principal balance exceeded the new property appraisals by a wide margin in many cases. The average loan-to-value ratio among the 1,125 CMBS loans in the survey sample was a whopping 160%, up from 72.7% when the loans were securitized. (The 1,125 loans total $15.4 billion in volume.)

“In many cases you really almost have no choice but to have a distressed sale of the property because the value of the loan is less than the mortgage outstanding,” says Paul Mancuso, vice president with Trepp, a New York-based commercial real estate data and analytics firm.

“The new valuations will go a long way in determining the best workout strategy for a loan. The end goal is to preserve the most value for the CMBS trust,” emphasizes Mancuso.

Rather than sell real estate assets at fire sale prices, however, many special servicers prefer to work with financially strapped borrowers to extend existing loan terms in the hope that the tide will eventually turn in their favor.

“Why are you extending a loan right now?” Mancuso says rhetorically. “Because you believe that we have fundamentally reached the bottom of the market. People are almost immune to bad news right now. It can only get better. The hope is that if you extend for 12 to 24 months the fundamentals of both the property and the economic environment will have improved enough to generate positive cash flow.”

Not surprisingly, loans originated from 2005 through 2007 dominate the list of underwater properties. The period was characterized by inflated property valuations. For example, when a $22 million CMBS loan on the Northland Inn hotel and conference center in suburban Minneapolis was originated in 2006, the appraised value of the asset was $34.2 million. Today’s appraised value on Northland Inn— whose status is classified by Trepp as real estate owned (REO)— is just $2.5 million (see table above).

In total, 1,097 loans in the sample lost a staggering 51% of their value, falling from $23.9 billion at securitization to $11.8 billion currently. Conversely, only 22 of the 1,125 loans in the sample experienced an appreciation in property value since the loans were securitized.