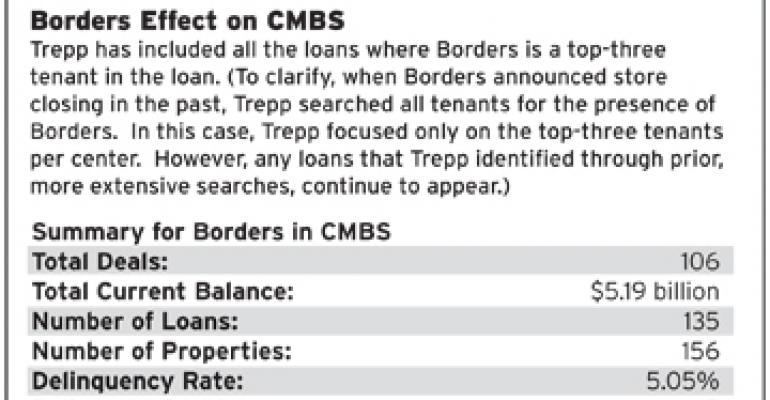 Long Road Ahead for Borders’ Landlords

Even though leasing brokers insist Borders’ liquidation is not going to be nearly as devastating for the retail real estate community as liquidations of Mervyns, Linens ’n Things and Circuit City, the loss of another big-box tenant will still put a strain on some owners.

In the commercial mortgage-backed securities (CMBS) market alone, at least 135 loans include properties where Borders currently serves as one of top three tenants, according to Trepp LLC, a New York City-based research firm focusing on CMBS and commercial mortgage information.

Eighteen of those loans are already delinquent. Another 45 have now been put on Trepp’s watch list for delinquency.

As recently as June, the CMBS delinquency rate in the retail sector was showing improvement, falling 12 basis points to 7.82 percent. Borders’ liquidation has the potential to reverse that trend.

Thomas Fink, senior vice president and managing director with Trepp, spoke with Retail Traffic about which properties and owners might be most at risk from the final round of Borders’ store closings.

Retail Traffic: How unexpected was this liquidation?

Fink: I don’t think anybody thought it was unexpected. Clearly, there was significant pressure on booksellers in general, and on music sellers, from the digital format. A store like Borders, which was books and music, had to be under significant retail pressure.

Retail Traffic: How much of an impact is this going to have on the total volume of distress in the retail sector?

Fink: It’s going to be hard to say how it’s going to affect delinquencies. There is a real possibility that a number of properties that were otherwise in good shape will have to find a new tenant. There were a number of cases where the Borders in and of itself was the only tenant [in a freestanding location].

Those properties are going to experience the greatest distress. In many cases those were build-to-suits for Borders. They are 20,000 to 40,000 square feet. Those are big stores. They are not mega stores, they are not Lowe’s or Walmarts — but it’s a large store plate.

Retail Traffic: Do you think the freestanding locations will have the hardest time finding replacement tenants in time to avoid default?

Fink: I think it’s going to depend on the traffic of the location itself. A standalone Borders in a high-traffic area, with a lot of parking, could be attractive to a lot of retailers. You can put in an entertainment use or any number of large clothing stores.

When OfficeMax closed a bunch of its stores, or Linens ’n Things started closing stores, what I often saw was that the stores that took those places were a little bit more downscale than what was there originally.

The question is: Does that stabilize the property or does it put pressure on the remaining stores that were there to get the same amount of traffic that they were getting from Borders?

Retail Traffic: What type of property owner would be at greatest risk of default from the Borders liquidation?

Fink: I think it’s probably the small, private property owner who owns a series of stores in the local community. Obviously, when it comes to the big REIT developers, the Kimcos and the DDRs (Developers Diversified), Borders is going to hurt, but it’s not going to put their properties over the edge.

They have a lot of capital, and Borders was never as significant a client for these developers as for some of the others. That’s why I think it’s going to be the local and small regional developers who will feel most of the pressure.

Retail Traffic: How long do you think it will take for the market to absorb all the extra space?

Fink: You know, again, it depends on the location. My guess is that it’s not going to be quick. These are not going to be snapped up at a moment’s notice because retail as a whole [is still challenged].

One of the things we’ve observed is that there isn’t the next big theme retailer out there. The only tenant that is able to draw a huge amount of traffic right now is Apple. You can draw high-dollar clientele with an Apple store.

But it’s not like the old days, when Linens ’n Things and other big concept stores were coming online. I don’t see the next big idea that’s going to absorb lots of space all over the country.

Retail Traffic: In your view, have we seen the last major retail liquidation in this cycle, or do you have your eye on additional retailers who might be at risk?

Fink: Oh, we are nowhere near done. Even though things have gotten a little better in terms of the numbers, my guess is that we’ve got another two to three years before we can say that we are through with the bulk of the problems, and that’s assuming a healthy capital market. I don’t think we are done with liquidations at all.