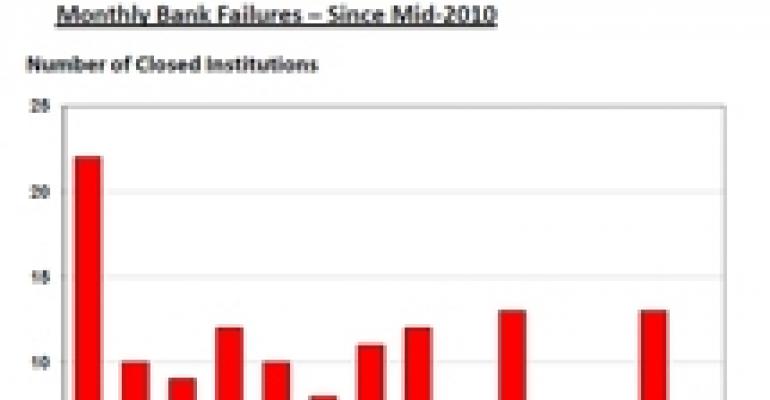 It certainly was no cause for celebration. Seven U.S. banks failed in August with commercial real estate loans accounting for $257 million (or 56%) of the $456 million in nonperforming loans at the failed institutions, according to Trepp LLC.

But the sector has seen worse. The number of bank failures in August is down from a record high of 13 in July, reports the New York-based analytics firm, and raises the tally to 68 through the first eight months of 2011. Industry experts predict approximately 100 bank failures this year.

Lydian was the largest failure in August. With $1.7 billion in assets, Lydian accounted for more than half of the $3.2 billion in total assets among the failed banks that month.

Struggles in the Southeast continue

Illinois ranks third in total bank failures overall, with seven failures year‐to‐date through August, and 44 since the failure cycle began.

The banks that failed in August had all been on the Trepp Watch List for a considerable amount of time prior to failure. The median length on the watch list was nine quarters, and ranged from seven to 12 quarters.

Only three of the seven bank failures that occurred in August involved loss-sharing agreements entered into by the Federal Deposit Insurance Corp. (FDIC), with 44% of the acquired assets covered by loss-share agreements.

In a loss-share agreement, the FDIC shares in loan losses that may be incurred by the acquiring healthy bank as a direct result of any nonperforming loans that it acquires from a failed bank. The loss-sharing agreements also make it possible for the FDIC to share in any recoveries on nonperforming loans.

“The continued reduction in loss-sharing transactions is an indicator that acquiring banks are gaining confidence and that the FDIC seems to be able to extract better terms from buyers,” wrote Trepp researchers in their monthly report on U.S. bank failures released Sept. 6.

“Nevertheless, loss-sharing still covered nearly half of the total failed bank assets for the month,” the researchers emphasized, “so we expect to see more in the months ahead.”