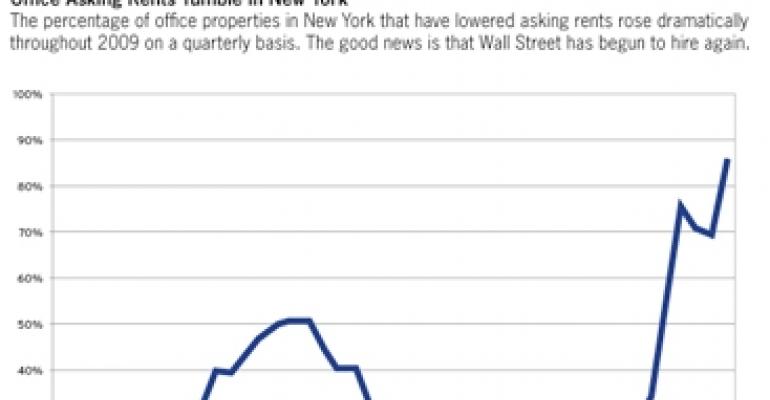 Despite the havoc that the past year wreaked on office rents and occupancies, the combination of limited supply growth and expected stabilization in the labor markets foreshadows a relatively quick return to positive rent growth.

This forecast implies that although the sales market for office properties has remained slow, a pickup in transaction volume and prices may occur swiftly.

After the office market peaked in 2007, the bubble deflated slowly through 2008 before the downturn gathered steam after the fall of Lehman Brothers.

Office properties took the brunt of the recession last year, with rents falling at record rates. Effective rents cratered by 8.9% in 2009, the largest decline on record in almost 30 years of Reis history.

Hidden amidst the devastation were signs that office occupancies were faring better than other property sectors. While multifamily and retail vacancies were hitting highs unseen in two decades or more, the national office vacancy rate was 17% at the end of 2009, the highest level since 2004.

While previous downturns were characterized by massive overbuilding, office inventory growth was relatively constrained from 2004 to 2008 for a variety of reasons.

Due to a spike in construction costs from 2004 to 2006 and tepid rent growth that really didn’t begin accelerating until 2005, developers were far more interested in building residential units amid a housing boom.

The second reason office occupancies are holding up is that leases have yet to roll over. The typical multifamily lease expires in 12 months, whereas the average lease term for office space spans anywhere from four to seven years.

Naysayers will argue that the rollover risk is still high. Five-year office leases up for renewal in 2010 are generating lower rents than a few years ago. However, there is growing evidence that as the economy recovers, rents may indeed post tepid but positive growth by 2011.

If this comes to pass, two years spent in negative territory in 2009 and 2010 pales by comparison to the negative rent growth that office buildings endured from 2001 to 2004.

After the dot-com meltdown and terrorist attacks on the World Trade Center in the early 2000s, the percentage of properties that lowered rents spiked from around 8% to over 50%.

By comparison the situation is much worse in today’s downturn, with financial services at the epicenter of the aftermath of Lehman’s collapse. The percentage of properties that lowered rents spiked from around 8% to 86% in the fourth quarter of 2009.

There still is room for rents to fall, so much so that Reis expects office rents in Washington, D.C. to be higher than rent levels in New York by the end of the year.

Signs of a turnaround

The big question is whether we will see a downward trend in this line graph in the next few quarters. Recent national labor market figures are heartening, with the unemployment rate holding steady at slightly under 10%.

Despite the ire that banks receive because of their bonus payouts, Wall Street has begun to hire again, and job loss figures for New York City were not as bad as expected.

Unexpected events can derail this recovery, and economic growth is expected to be fragile for the near term, but as more positive news emerges we may be on track to seeing rents grow as early as next year.

If this is the case, transaction volume and prices may pick up quickly to capitalize on the next upswing.