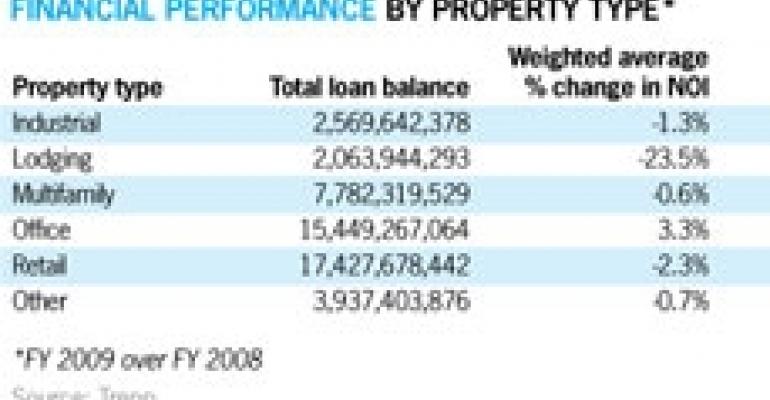 Opportunity buyers looking for institutional-grade hotel investments have so far been met with steep competition from foreign investors, private equity and REITs, among others. To date, these investors have been paying attention to loans that are on master servicer watch lists or that are being transferred to special servicing.

But an often over-looked indicator of future distress, according to Paul Mancuso, a vice president with commercial real estate data and analytics firm Trepp LLC, is year-over-year declines in net operating income (NOI), or a company’s income after expenses are deducted.

The New York-based researcher recently mined its database for loans with reported property financials as of fiscal year-end 2009 that were current on their mortgage payments, not placed on the master servicer’s watch list or transferred to special servicing. The sample included only single property loans — all multi-property loans were excluded from the analysis.

The overall sample of 5,265 CMBS loans saw a decline in NOI of 1.4% in FY 2009, with most major property types falling within a narrow range, according to Trepp. The lone exception was the lodging sector, which experienced a depressing NOI decline of 23.5% in FY 2009. In fact, 87% of the lodging loans in the sample saw a decrease in NOI.

“The loans in this sample may be flying under people’s radar, since market participants have enough trouble tracking the record-level loan volume either on watch list or in special servicing,” says Mancuso. “There’s really no early warning classification for these loans since they are current, or performing on their monthly obligations.”

Ten of the top 15 loans with the greatest year-over-year decline in NOI, from 2008 to 2009, are lodging loans. "Unlike office, retail and to some extent multifamily properties, which benefit from multi-year tenant leases, the lodging sector is challenged on a nightly basis to fill rooms," says Mancuso.

"The numbers illustrate why it is no surprise that the lodging sector had by far the highest overall delinquency rate at 16.9% through March 2010," he adds.

Of the top 15 lodging loans over $25 million with the greatest year-over-year decline in NOI, five are Double Tree-branded hotels and two are Westins. But all properties on the list without exception fall within the upscale, boutique or luxury categories.

Despite the poor performance, fundamentals for the lodging sector across property types — from economy to luxury — appear to be improving, if only in small increments. Smith Travel Research, based in Hendersonville, Tenn., now predicts 2010 occupancy to increase 1.9% to 55.8%, average daily rate (ADR) to fall by 2.3% to $95.45, and revenue per available (RevPAR) room to end the year virtually flat with a 0.5% decline to $53.22. Meanwhile supply is projected to grow 2.2% as demand rises by 4.1%.

If the hotel sector did hit bottom in 2009, it is possible that the owners of these income-challenged properties may have actually survived the downturn unscathed, says Mancuso. “However, investors should keep a watch on these loans because if we truly aren’t at a bottom, these are potentially the next pool of candidates that can become troubled.”