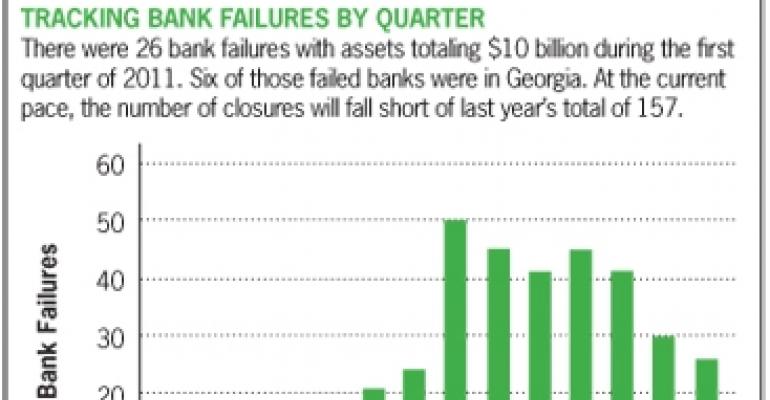 Rate of Bank Failures Slows, But Is It a Trend or a Blip?

While the pace of U.S. bank failures has slowed considerably in recent quarters, giving troubled financial institutions more time to raise capital, a watch list compiled by New York-based Trepp LLC indicates the banking sector is far from being out of the woods.

According to Trepp, its proprietary watch list methodology has successfully identified about 96% of the banks that have failed in the current cycle that began in September 2007.

“The number of banks on the watch list remains large, and banks are spending more time on the list,” according to Trepp’s latest U.S. Bank Failure Report. “While the pace of closures has slowed, distress at many banks remains high, and these banks will still be in the position of heightened risk until they either boost capital, improve performance or both. Failure also remains a possibility for these banks.”

Just last week, that possibility of failure became a harsh reality for two additional banks: Nevada Commerce Bank in Las Vegas and Western Springs National Bank and Trust in Western Springs, Ill. The assets of the two failed banks total $332 million, and the cost to the FDIC is an estimated $62.9 million.

March was a relatively quiet month with only three bank failures, including The First National Bank of Davis in Davis, Okla.; Legacy Bank in Milwaukee, Wis.; and the Bank of Commerce in Wood Dale, Ill. The three failed banks had assets totaling $443.7 million.

Their Achilles’ heel was clearly too much exposure to real estate. Among the three failed banks, commercial real estate loans comprised $44 million, or 55%, of the $80 million in nonperforming loans, according to Trepp.

Commercial mortgages made up $27 million, or 34% of the $80 million total, while construction and land loans comprised $16 million, or 21%, of the total nonperforming pool.

Meanwhile, residential real estate at the three banks accounted for $29 million in nonperforming loans, or 36% of the total nonperforming balance.

The three bank failures occurred in areas that have experienced additional bank failures in 2011, according to Trepp. With 40 closures since the start of the current cycle in late 2007, Illinois ranks third among states with the highest number of failed banks.