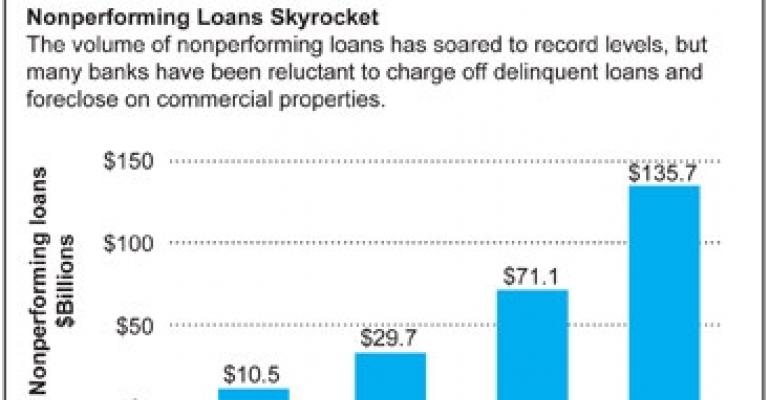 With 140 bank failures, there’s no question 2009 was a wild ride for the nation’s bankers. Instead of easing up this year, however, lenders can expect the terrain to get even rockier as the volume of nonperforming commercial, construction and land loans jumps to $165 billion in 2010, up from $135.7 billion in 2009, according to new projections from Foresight Analytics.

Although big banks with more than $100 billion in assets, such as Wells Fargo and Bank of America, recorded the largest dollar amount of nonperforming loans at $47.6 billion in the fourth quarter, the banking giants did not suffer the effects of troubled loans to the degree that smaller banks did.

Nonperforming commercial loans more than 90 days past due and commercial mortgage charge offs, in which banks take a loss on a loan, have hit regional and mid-size banks proportionally harder and are, in fact, so damaging that they could “definitely” contribute to new bank failures this year, says Anderson.

“For banks in that $100 million [in assets] to $100 billion size range, commercial real estate really is the main loan type, as opposed to single-family residential or other loan types like business lending,” he says.

Of the $135.7 billion in nonperforming loans recorded last year, construction and land loans totaled $81.3 billion, with commercial development making up less than half of that amount. Nonperforming commercial mortgages totaled a record-setting $54.5 billion compared with just $9.3 billion at the peak of the market in 2007.

Already this year, the Federal Deposit Insurance Corp. (FDIC) has been busy taking over failed banks. Through Jan. 22, the FDIC reported nine bank failures in 2010, including five on Jan. 22 alone. The pace of closures was three times that of the same period in 2009.

Relatively little of the defaulted loan volume has been worked out by selling the loan at a loss or foreclosing on the property, says Anderson. Banks have been reluctant to accept such losses, even as nonperforming loans burgeoned. So the value of foreclosures has remained disproportionately low, totaling $24.2 billion in the fourth quarter.

The process of writing off troubled loans is only about 60% complete, the research firm estimates. In 2009, banks took $39 billion in charge offs, and they are expected to write off another $30 billion to $43.3 billion in 2010. The bulk of troubled loans were made from about 2003 to 2007, at the height of the commercial real estate market.

The property type most damaged by delinquent loans is the hotel sector, says Hercher. As of 2009, 13.8% of the lodging sector’s loans were 30 or more days past due, compared with 9.3% of multifamily loans and 5.5% of retail loans.

When will losses stop?

Defaults will peak by early 2011, and level off before declining, Foresight Analytics anticipates. As the economy gains strength, lenders are expected to tackle problem loans more aggressively.

Record defaults are a symptom rather than a cause of deep-seated economic problems, Anderson says. Market growth and a large lending volume at peak prices, looser underwriting and a sharp plunge in values combined to create the pool of troubled loans.

Now, the problem has grown so large that it is distracting lenders and sapping their strength at a time when they need to make fresh real estate loans, he says.

But there’s a silver lining, of sorts. Banks are likely to get busy writing off more problem loans this year, says Anderson. “They’ll get those values down closer to where they can make deals with opportunistic buyers of debt.”

And if they don’t? “We haven’t seen a mass exodus yet from the commercial mortgage market. That could still happen.”