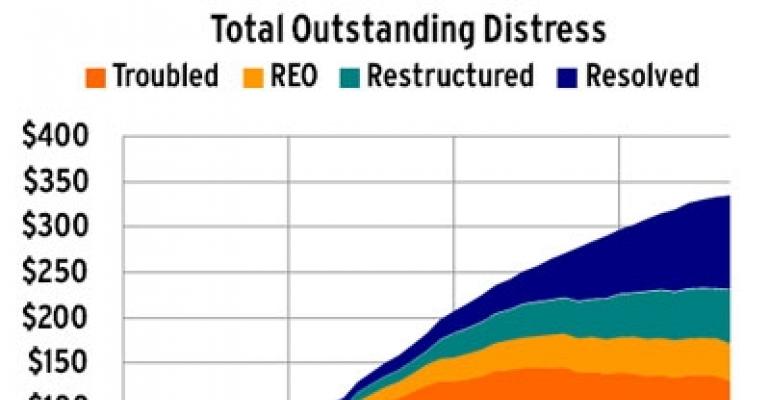 The market for distressed commercial real estate loans is picking up momentum, with current conditions favoring investors who can buy in bulk.

The 507-loan FDIC portfolio consists primarily of commercial and residential acquisition, development and construction loans previously held by 42 failed banks. Many of the underlying assets are undeveloped land parcels located primarily in the Midwest and Southeastern United States.

The 171-loan Bank of the Cascades portfolio has been secured by retail, office and industrial properties and land parcels located in Oregon and Idaho.

Most of the loans are on the smaller side—under $10 million, according to Sabal Financial Group CEO R. Patterson Jackson. Jackson says the firm has seen a lot of loans come on the market recently at attractive prices.

“We are a long-term investor and with the values available today, we think it’s an ideal time” to buy, Jackson says. “There are a lot of assets coming on the market.”

With a high number of loan maturities coming due over the next two years, banks feel more urgency to get rid of distressed assets, so they are putting their non-performing loans on the market, says Gary E. Mozer, CEO of George Smith Partners, a Los Angeles-based real estate financing and consulting firm. In October, the market saw 11 banks fail, most brought down by non-performing commercial real estate loans, according to Trepp LLC, a New York City-based provider of commercial mortgage information. The number was up significantly from both August and September.

But while the banks are starting to sell the bad loans, most of the time they sell in bulk, rather than piecemeal, limiting the field of prospective buyers to cash-flush private equity firms like Oak Tree Capital and Fortress Partners Capital, Mozer says.

Plus, because the loans that the banks are most likely to dispose of right now are in the small to medium size range, often secured by development and construction properties, they don’t necessarily appeal to institutional buyers, according to Jackson.

“Certain land positions are going to be extremely hard hit, depending on where they are,” says Jackson. “And a performing loan can be selling at 50 percent of the value of what was originally originated. The discount varies based on the type of asset, the performances of the asset, geography and even, in some cases, the guarantor.”

Sabal plans to hold the loans for a three- to five-year period, which is why the firm feels comfortable buying now. In the current market cycle, many investors have been paralyzed by fear that they might buy too soon, and values on distressed assets might yet drop further.

But because Sabal has been buying in bulk and has a long-term view, its executives can follow their instincts on whether to buy or not, Jackson says.

Getting the timing right down to the minute is most important to smaller investors, who plan to put most or all of their money into only a few assets, he notes. A firm that’s buying hundreds of millions of dollars in distressed loans and has no plans to sell them in the near future has more freedom to act. Sabal currently has $3 billion in assets under management.

“With the market bouncing around the way it is today, it puts uncertainty in the minds of investors. It really does require patient capital and guys that have a bigger portfolio to look at, so they are looking at a macro sense and don’t have to be right 100 percent of the time.”

Sabal will provide loan servicing and asset management for its new acquisitions. But Jackson adds that in many cases today, when the firm buys distressed loans, there is nothing fundamentally wrong with the properties themselves—they might simply have been overleveraged. In those cases, Sabal leaves the existing property management team in place.

“It’s certainly not our intention to go in there with the idea that everything is going to change—because a lot of the times everything has been done right; it’s just that the market has hurt everybody,” Jackson says.