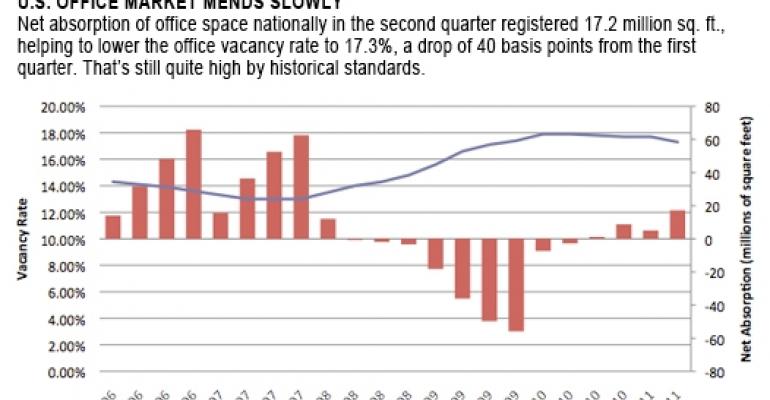 The economic downturn has affected every commercial real estate property type, but the hardest hit continues to be the office market. Even before the recession, many corporate tenants had introduced a number of new office concepts, such as telecommuting and hoteling, that curbed tenant demand for space.

Since the deep recession and its aftermath, three other factors have helped define the market: lack of jobs, the changing way today’s office space is actually being used, and the sustainability movement that is changing how decisions are being made. The bottom line is that companies have become more aggressive at controlling their occupancy costs, resulting in tepid demand.

Of the four major property types, the office market as a whole has performed the worst in the aftermath of the financial crisis, hitting a vacancy rate of nearly 18% nationally in the first quarter of 2010, according to Grubb & Ellis. Although occupancy has improved over the last 12 months, the office market will likely lag behind the other property sectors in terms of recovery.

Unlike some other property types, particularly the industrial sector, warm bodies are a necessary component in office space demand. Between mid-2008 and mid-2009, the economy shed nearly 7 million jobs, many of which were in sectors that were heavy users of office space. Despite three straight quarters of significant nationwide job creation, the U.S. remains far below pre-crisis levels of employment.

To identify where the office market recovery is most likely to occur first, we must identify the economic drivers in our locations of interest, the degree to which these drivers rely on office space, and the expected productivity growth in these industries.

Our best metric for measuring economic drivers in a geographic area is the so-called location quotient. It measures the portion of the geographic area’s employment base devoted to a particular industry compared to the portion that exists in a larger baseline area, such as statewide.

All in all, improvement in the overall employment picture should lead to a faster recovery of the office market in areas where the employment base is dominated by heavy office-using industry sectors.

In order to cut costs in these difficult times, companies have become more efficient in their use of office space. Open floor plans filled with cubicles have replaced the structurally partitioned offices of the past.

Hoteling, which has become popular among companies with large sales force teams, uses standard workspaces that employees can check into on an as-needed basis.

Changes in technology have accelerated this process. Widespread digitization of documents has largely eliminated the need for filing cabinets. Flat-screen monitors, laptops, and networked printers have reduced the desk space needed for job productivity.

With less office space required per worker and fewer workers being used to accomplish a given workload, greater job creation than what has been lost over the last three years will be required to bring the office market back to health.

Green is a major selling point

Companies increasingly are interested in leasing office space in LEED-certified buildings, or locating in transit-oriented districts that enable employees to commute to work easily by rail, bus, or bicycle. (LEED stands for Leadership in Energy and Environmental Design.)

Devised by the U.S. Green Building Council, the LEED system evaluates the environmental performance of a building and encourages market transformation toward sustainable design.

With this in mind, in coming years the better-performing metro markets and submarkets are likely to be the ones that conform to this desire for “greenification.”

On the bright side, construction of new office space has virtually ceased nationwide. Financing difficulties aside, there is little incentive to build with purchase prices below replacement cost in many areas.

But the fact remains that many areas of the country are struggling with high unemployment. At the same time, technology is continuing to move forward in ways that will likely further reduce the amount of office space needed per worker. Compounding the problem is that many office buildings remain unattractive to firms with strong green preferences.

Without significant, sustained improvement in economic fundamentals — particularly job growth — the U.S. office market will no doubt continue to languish.

Tracey Seslen is a senior research associate with the University of Southern California Lusk Center for Real Estate. She can be reached at [email protected]