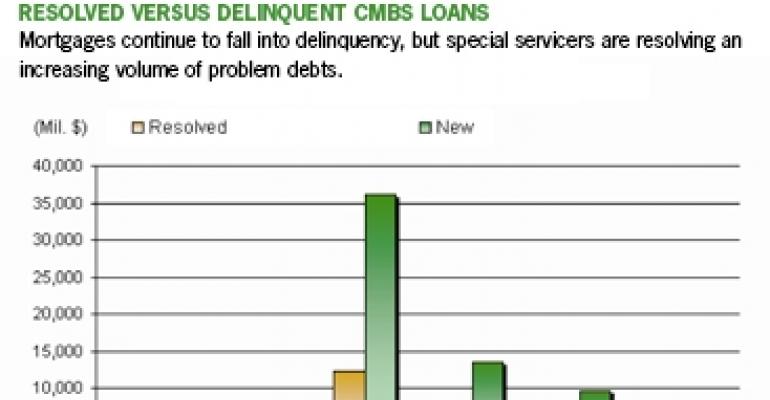 Loans backing commercial mortgage-backed securities (CMBS) issued in the years before the financial crisis are falling into delinquency in ever greater numbers, but analysts expect the tide of defaults to turn this year.

An ongoing recovery in the commercial real estate sales market is helping to resolve loans, say experts. With more deals occurring, special servicers in many metro areas have a better idea of what a property is worth in the marketplace.

The percentage of CMBS loans 30 days or more past due has proven to be volatile. The delinquency rate rose 27 basis points from November to December to reach an all-time high of 9.2%, according to New York-based Trepp LLC. The outstanding balance of delinquent securitized loans now stands at $61.5 billion.

The CMBS delinquency rate will peak between 9% and 10% in 2011, predicts Eric Thompson, managing director at Standard & Poor’s Financial Services. While commercial borrowers will continue to fall behind on payments this year, the special servicers who work with troubled loans in CMBS pools are making headway in moving those loans out of delinquency, he emphasizes.

Change is already occurring. The upward movement in delinquencies has slowed from the alarming pace of increases that followed the onset of the recession in December 2007. By the end of 2009, the amount of delinquent loans had rocketed to $30.59 billion, up 1,242% from the $2.28 billion two years earlier.

The rate of increase slowed each quarter in 2010 and the delinquency rate stood at 8.32%, or $46.8 billion, at the end of the third quarter.

One reason that delinquency numbers are leveling off is that special servicers are better able to resolve delinquent loans, thanks to a recovery in commercial real estate sales. U.S. transaction volume exceeded $100 billion in 2010, nearly twice the sales volume of $54.6 billion in 2009, according to a preliminary tally from Real Capital Analytics.

With sales data to establish pricing, special servicers can more easily decide whether it is in the best interest of investors in the CMBS deal to foreclose on a property and liquidate the asset. In 2008 and 2009, liquidation prices were more difficult to predict and special servicers were more likely to grant loan extensions.

But headwinds remain. On average, commercial property values had fallen 42.7% by the end of the third quarter of 2010 from the peak in October 2007, according to the Moody’s/REAL Commercial Property Price Indices.

Some 3,256 CMBS loans totaling $48.8 billion are scheduled to mature in 2011, according to Standard & Poor’s. Even with greater access to financing from CMBS and other sources, properties backing many of those loans won’t qualify for replacement financing due to an equity gap.

Special servicers have foreclosed on two of North Coast’s shopping centers, and the company’s remaining properties are now worth less than the principal on its CMBS loans. Unless asset values make an unexpected recovery, the firm will need to make a case for a discounted payoff amount on the final balloon payment in order to qualify for replacement financing.

“And that’s where the majority of borrowers live today,” he says. “They need a modification just to get the balance of their loan into a realm where they could finance the payoff.”