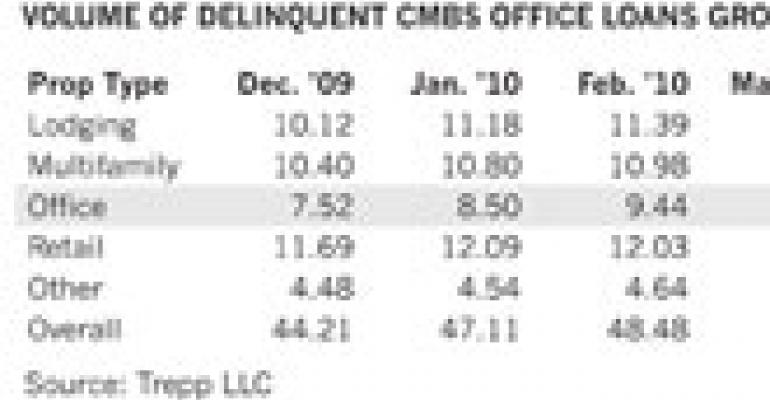 Once a bright spot in the troubled commercial mortgage-backed securities (CMBS) market, the office sector now finds itself in the eye of a storm. The volume of delinquent office loans increased from $7.5 billion in December 2009 to $13.4 billion in July, a 78% increase, according to New York-based Trepp LLC. The volume of office loans in special servicing during the same period grew from $12.2 billion to $21.7 billion.

“At $21.7 billion, the office sector now has the largest dollar volume of loans residing in the hands of special servicers. That figure represents 25% of the overall volume in special servicing,” says Paul Mancuso, a vice president with Trepp, an independent commercial real estate data and analytics firm.

The irony is that the 6.35% delinquency rate on CMBS office loans remains the lowest among the four major property types — lodging, multifamily, office, and retail. In contrast, the lodging and multifamily sectors in July posted the highest delinquency rates at 18.41% and 14%, respectively. (Trepp considers a loan delinquent when payment is 30 days or more past due.)

Up until recently, the long-term lease nature of office buildings has protected the sector from the struggling economy. But as leases begin to roll over, the sector has been faced with a growing level of distress, explains Mancuso. “In an attempt to maintain occupancy levels, landlords must offer numerous concessions, tenant improvements and reduced rent that are starting to impact the bottom line.”

The health of the office sector will likely remain weak until employers begin aggressively hiring again. The private sector generated 71,000 jobs in July, below expectations of at least 90,000. The national office vacancy rate office rose to 17.4% in the second quarter, the highest level since 1993, according to New York-based research firm Reis. Effective rents, meanwhile, fell 0.9% compared with the previous quarter to an average of $22.01 a sq. ft. per year.

The office sector accounts for six of the top 10 loans in special servicing that remain current on their mortgage obligations. Topping the list is a $4.9 billion, single-asset mortgage known as the Equity Office Properties (EOP) Portfolio. The loan was transferred to special servicing on May 21 due to concerns regarding the borrower’s ability to refinance the senior mortgage plus mezzanine debt.

The EOP Portfolio loan is backed by 100 office properties located throughout the United States. A Blackstone Group fund acquired the portfolio through Blackstone’s takeover of EOP in 2007. The borrower has proposed a loan modification that includes additional extension options. The special servicer is Bank of America.

Second on the top 10 list of loans in special servicing that remain current is a $2.6 billion loan to Beacon Capital Partners LLC, known as the Beacon Seattle & Washington D.C. portfolio. The Beacon loan is split across six deals and has exposure to both the Seattle and Washington, D.C. office markets.

The loan was transferred to special servicing in April for “imminent default” when Beacon indicated it may be unwilling to commit additional capital to fund leasing costs, capital improvements and debt-service shortfalls due in part to lease rollover projections, according to Trepp. As of July, the loan was still current and the borrower was seeking a loan modification.

“If these trophy properties in the large, economically diverse markets are having issues, can you imagine the problems at some of the smaller, suburban offices where the loans were underwritten during the 2005-2007 time period?” asks Mancuso. “The ability for them to refinance is even that much greater.”

Approximately $38.9 billion in CMBS office loans will mature between now and the end of 2012, according to Mancuso, the most volume of any property sector.