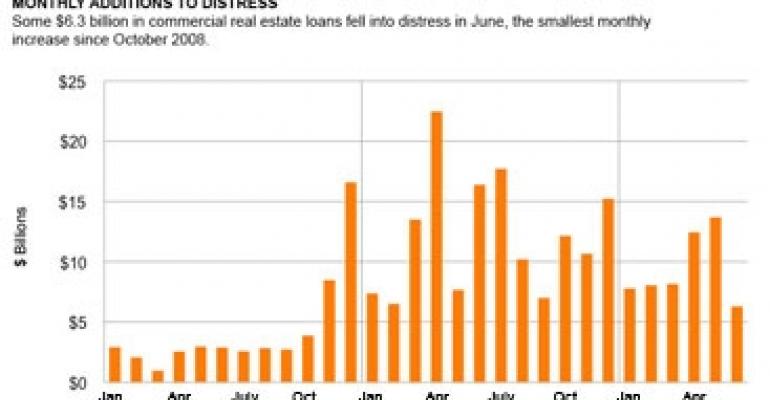 The worst of the debt crisis may be over for the commercial real estate industry. Several measures suggest that the pace of loans newly classified as delinquent, in default or foreclosure has slowed and lenders are gaining ground in their efforts to resolve problem debts.

Resolution entails a 100% recovery rate or repayment of the loan amount, as opposed to a loan modification, which may bring a partial recovery through recapitalization, an extension or other changes that leave the lender exposed to the collateral.

The dollar volume of loan modifications also more than doubled to $15.6 billion, bringing total workouts to $30.2 billion, equivalent to the workout volume for all of 2009.

“This is the first clear evidence we’ve been able to gather that lenders are starting to resolve their troubled issues,” says Dan Fasulo, managing director at RCA.

Stabilized, core assets in primary markets have recovered much of the market value lost since the onset of the credit crisis and recession, Fasulo says. That is making it easier for lenders and borrowers to restructure debt or bring in equity partners to resolve loans, he says.

In Chicago, a 60-story office tower at 300 North LaSalle traded for $655 million this month. The capitalization rate on the deal was close to 6%.

“That’s pricing we haven’t seen since close to the height of the market,” Fasulo says. “Clearly, we’ve seen a situation develop where owners that may have been under water 12 months ago may now be in the black again.”

The recovery in property values is limited so far to stabilized assets in markets and locations highly sought after by investors, Fasulo emphasizes. Property values remain depressed for assets out of favor with investors, including undeveloped land or buildings with high vacancy rates.

Resolutions accounted for 48% of all workouts in the first two quarters this year, up from 43% of workouts a year ago. Recovery rates are uneven across lender types.

Regional and local banks recovered just 64% of the unpaid loan balance in their workouts during the first half of 2010, for example, compared with recovery rates of 71% for national banks and 77% for international banks.

The poorer performance of regional and local banks is due in part to a heavier concentration of construction loans on those balance sheets, according to RCA.

Securitized loans accounted for 64% of new distress by dollar volume in the first half of the year but only 45% of workouts, according to RCA.

The low recovery rate in CMBS stems in part from a preference among special servicers to extend loans in hopes of more favorable market conditions down the road rather than liquidate debt.

Special servicers restructured $9.8 billion in delinquent loans in the first half of 2010, compared with just $3 billion in loan resolutions, according to RCA.

Even so, there are signs that CMBS special servicers are making headway to address the level of distress. For one, the CMBS delinquency rate is slowing in its ascent after nearly a year of steady monthly increases on loans 30 days or more past due, in foreclosure, or taken back by lenders as real estate owned.

July’s all-time-high delinquency rate of 8.71% marked a gain of just 12 basis points from the previous month’s rate, according to Trepp LLC, a New York-based commercial real estate data and analytics firm. The rate climbed only 17 basis points in June.

June and July’s increases pale in comparison with the previous 10 months, when the delinquency rate jumped an average of 39 basis points each month, says Paul Mancuso, vice president of Trepp.

“Although the volume of distress in the CMBS market remains at historic levels,” he says, “the last two months give hope that perhaps the darkest days for the CMBS market are behind us.”

Nearly $3.2 billion in conduit loans were referred to special servicers in each of the first five months of 2010 before tapering to $140 million in June and $500,000 in July, according to Trepp.

Fasulo of RCA acknowledges that lenders and CMBS special servicers still have most of their work ahead of them when it comes to resolving the current volume of distressed debt, but he is encouraged by this summer’s progress in the sector.

“Do they still have a long ways to go? Sure, especially the regional and local banks,” he says. “But incremental improvement is a positive sign for the marketplace.”