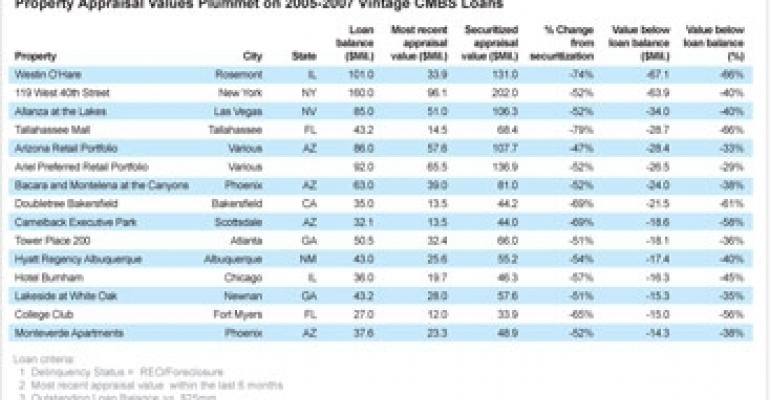 Since peaking in early 2007, commercial real estate values have seen a steady decline. On average, the 15 properties listed below are extremely underwater, meaning the appraisal value within the last 6 months is 46% less than the current loan balance. From securitization, the average drop in appraisal value for this same set of loans is 58%.

“Not surprisingly, the main thing these loans have in common is that 14 out of the 15 were originated between 2005 and 2007, the boom time for CMBS issuance when underwriting standards were the most lax,” says Paul Mancuso, a vice president with commercial real estate data and analytics firm Trepp LLC, based in New York. The lone exception is the Tallahassee Mall, originated in 1999, and now worth less than 66% of its current loan balance.

At the greatest extreme, Chicago’s Westin O’Hare lost 74% of its $131 million appraisal value at securitization in November 2006. Today, an opportunistic investor could pick up the 525-room hotel for $33.9 million based on the September 2009 appraisal, also 66% less than its current loan balance.

While the loans below represent the top 15 foreclosed or REO loans with the greatest value decline since securitization, they also have in common the fact that none are faced with an immediate need to refinance. Maturity dates on these specially serviced loans range from 2011 to 2029.

With refinancing risk eliminated as a cause for distress, Mancuso says the most likely explanation is that the owners of these properties were unable to cover debt-service payments. Cash flows have been severely pinched by the extended period of job loss, the economic slowdown and reduced consumer demand.

“There’s no coming back in the near term for some of these properties,” he adds. “In many of these cases, the special servicers are just going to work with the lender to dispose of the nonperforming asset from their portfolio while preserving as much value that remains during the complex and sometimes lengthy workout process.”

Despite the general lack of cash available in the marketplace for new acquisitions or refinancing, Mancuso believes the current environment offers “some opportunistic investors with deep pockets the ability to pick up distressed assets at a discounted rate.”

These investors need to have a buy-and-hold mentality because, he cautions, “You’re not going to see a quick return making an investment in this environment.”