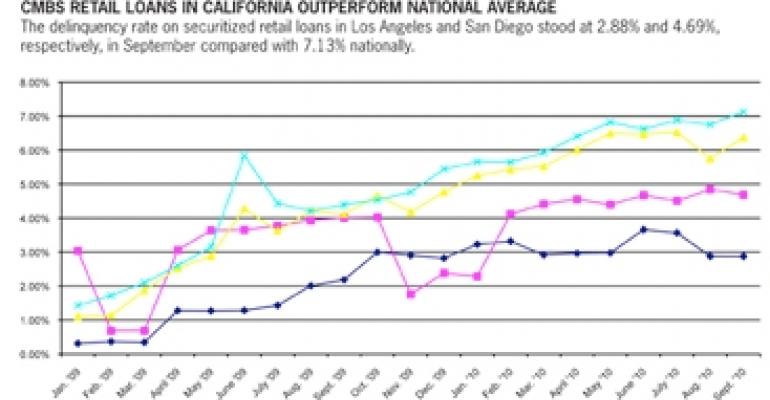 Despite the persistence of double-digit unemployment in Southern California, shopping center owners in Los Angeles and San Diego are experiencing some of the lowest retail loan delinquency rates in the nation, according to analytics firm Trepp LLC.

Of the $13 billion in securitized retail loans outstanding in the Los Angeles market, $374 million was in some stage of delinquency in September, reports New York-based Trepp. That translates into a local delinquency rate of 2.88% compared with the national average of 7.13%.

The San Francisco-Oakland, Calif. market has the lowest delinquency rate on securitized retail loans at 2.2%. Trepp considers a loan delinquent when it is 30 days or more past due.

“A lot of the more established markets, the Californias, the New Yorks, the Bostons, the Chicagos, they really didn’t overbuild, so there really was no overexpansion,” says Paul Mancuso, a vice president with Trepp. “So they will always remain market stalwarts, if you will. The market is relying on them to spearhead the slow but steady recovery.”

Signs of improvement in the beleaguered commercial mortgage-backed securities (CMBS) industry also have lapped onto the shores of San Diego. Of the $3.1 billion in CMBS retail loans outstanding in San Diego as of September, $147 million was in some stage of delinquency. That puts the retail loan delinquency rate at 4.69% locally, down from 4.84% in August.

“We haven’t had the overbuilding like you see in some markets, like a Texas, because we just don’t have the land,” points out Bill Rose, Western regional director of Marcus & Millichap’s National Retail Group. In addition, Southern California has long been recognized as a market with high barriers to entry. “Our politics are tough,” explains Rose.

He cites an example of a grocery-anchored shopping center in San Diego County that took 10 years to build. What’s more, the California Environmental Quality Act mandates an environmental impact statement for every development project. “The byproduct of that is you don’t have as much overbuilding.”

A victim of the downturn

While the housing foreclosure crisis has peaked in many major metros, its effects on the retail market have been cruel at times. Trepp reports that currently the largest CMBS retail loan delinquency by dollar volume in San Diego is a $48 million loan to Metroplex, a 211,000 sq. ft. furniture-related retail center located on Miramar Road. The loan, which was originated near the height of the real estate bubble in mid-2007, was foreclosed on in May of this year.

The special servicer noted that the property had suffered from a decrease in revenue as several tenants had either vacated the premises or downsized their existing space. The property was appraised at $22.2 million in June, less then half of the unpaid principal balance, according to Trepp.

“That’s a situation where the merchandising mix was dominantly focused on home furnishings. Now housing has stalled. Now people not only can’t furnish their homes, they can’t afford to stay in their homes,“ says Rose of Marcus & Millichap. “Obviously the retail demand for couches, rugs and such has fallen off, and you have a shopping center that’s core merchandising mix was home furnishings.”

The property fundamentals at community and neighborhood shopping centers in the Los Angeles market appear to have turned a corner, according to Reis, a New York-based commercial real estate research firm. After nine consecutive quarters of negative net absorption, the market posted positive net absorption of 65,000 sq. ft. in the third quarter.

In contrast, the retail vacancy rate at community and neighborhood shopping centers in San Diego rose slightly from 7.5% in the second quarter to 7.6% in the third quarter. But that’s still much healthier than the national average vacancy rate of 10.9%, according to Reis. Net absorption in San Diego was a negative 12,000 sq. ft. in the third quarter while the average net effective rent fell two-tenths of a percent to $25.26 per sq. ft.

Rose of Marcus & Millichap predicts that the East and West coasts will be the first regions to rebound once the pace of job growth picks up, most likely in 2011. “The jobs are in these markets, they are major MSAs (metropolitan statistical areas), and there isn’t overbuilding. You’ll then see that start to flow toward the middle of the country.”