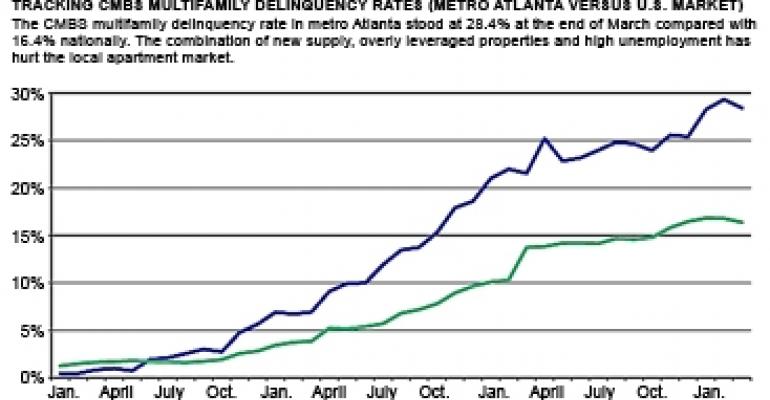 Why Is Atlanta’s CMBS Multifamily Delinquency Rate So High?

Despite improving real estate fundamentals, the Atlanta apartment market is plagued by a CMBS multifamily delinquency rate of 28.43%, the highest among the nation’s top 25 metropolitan statistical areas and well above the national average of 16.4%, according to New York-based Trepp LLC.

The total loan balance for securitized apartment loans originated on properties in metro Atlanta at the end of March was $2.6 billion, of which $741.3 million was delinquent, according to Trepp.

The biggest concentration of CMBS apartment loans 60 days or more past due in metro Atlanta is among properties built in the 1980s. In fact, the 1980s product accounts for 42% of all delinquencies based on total dollar volume, according to Trepp.

How did the Atlanta apartment market become so unhealthy? After all, at the beginning of 2008 the CMBS apartment loan delinquency rate locally was a miniscule 0.5%.

A sharp rise in the unemployment rate coupled with a wave of new supply caused metro Atlanta’s apartment vacancy rate to spike from 8.2% at the end of 2007 to 11.7% by the end of 2009, an increase of 350 basis points, according to New York-based real estate research firm Reis.

Plummeting real estate fundamentals in turn put a major dent in the net operating income of many apartment owners. And it didn’t help matters that many properties were grossly overleveraged.

“Atlanta, like many of the other worst performers, suffers from a large amount of loans that were originated in an overheated lending environment as the commercial real estate bubble peaked,” says Spencer Hollerith, an analyst with Trepp.

Indeed, some 73.5% of the securitized apartment loans that are 60 days or more delinquent in the Atlanta market were originated from 2005-2007, a period characterized by loose underwriting standards. At the time, the assumption was that rents and occupancies would continue to increase along with a robust economy.

Local bank failures and a lack of available funding for maturing debt also have played a role in Atlanta apartment delinquencies, say industry veterans. The troubles with securitized apartment loans could get worse before the situation improves, according to Trepp.

“From a loan maturity perspective, the future looks somewhat grim,” says Hollerith referring to the Atlanta apartment market. “Of the $2.5 billion scheduled to mature over the next seven years, 51.1% is sporting either a debt-service coverage ratio less than 1.0, or a loan-to-value greater than 100%”

Of the loans that fall into at least one of those two categories, only 56% are currently delinquent, emphasizes Hollerith. “Although fundamentals appear to be beginning to improve, this suggests that there are still quite a few potential new delinquencies in the pipeline.”

Some of the problem loans have been well documented. Atlanta-based Miles Properties Inc. and several of its related entities, including five of its 16 apartment complexes in the area, filed for Chapter 11 protection in early 2010 in U.S. Bankruptcy Court, according to the Atlanta Business Chronicle.

Miles Properties, a privately held company, was the top owner of apartment complexes in metro Atlanta in 2008 with 10,000 residential units, the publication reported.

In early 2010, Miles had 10 securitized mortgages totaling $109.2 million. Eight of the 10 loans, totaling $104.4 million, were in some stage of delinquency in early 2010, according to Trepp and industry newsletter Commercial Mortgage Alert.

On the supply side, Atlanta has added an average of 5,700 units annually for the past five years, says Andrew Mays, a local broker and vice president with Marcus & Millichap’s National Multihousing Group. “Thankfully, 2011 will only produce 1,800 units, expanding the existing stock by 0.5%.”

Concessions have all but disappeared for Class-A product and have led to some rent growth, says Mays. The typical concession for a Class-B or Class-C apartment complex in metro Atlanta is 4%, or approximately one-half of a month’s rent.

This amount has decreased within the last two quarters for a few reasons, Mays believes. “The primary reason is improvement in renter demand. Secondarily, landlords have begun reducing their asking rents from the market peak, as opposed to the initial reaction of offering concessions.”

In light of Atlanta’s persistently high unemployment rate and infrastructure issues, including water and transportation, some observers say the market has lost some of its luster. The conventional wisdom is that Dallas has surpassed Atlanta as a city with vision and a can-do attitude when it comes to tackling infrastructure issues. However, Mays has a decidedly more optimistic outlook about Atlanta’s future.

“Atlanta fully remains the go-to city in the Southeast, and will rebound. A generational buying opportunity currently exists, but we are already seeing the early signs of improving fundamentals and increasing values,” says Mays.

Even so, are apartment investors expressing irrational exuberance over the future prospects of the multifamily sector? On the contrary, says Mays, the excitement is warranted.

“Demographic trends are in our favor, and the single-family housing troubles are keeping more families in the rental pool. The long-term outlook for apartments is very attractive.”