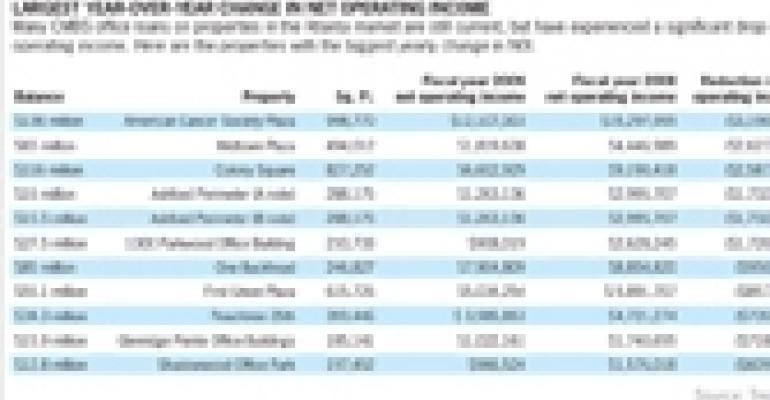 Office building owners in metro Atlanta with securitized mortgages are exhibiting a level of financial stress that far exceeds the national average, according to New York-based Trepp LLC. It’s the culmination of overbuilding and weak tenant demand.

The delinquency rate in metro Atlanta on office loans held in commercial mortgage-backed securities (CMBS) registered an unhealthy 10.6% in August compared with a national delinquency rate of 6.6%. Adding to the consternation of bondholders, 21% of all Atlanta office CMBS loans were in special servicing, well above the national rate of 12.89%, reports Trepp. A loan is considered delinquent when it is 30 days or more past due. A loan is typically transferred to special servicing when a default is imminent.

Trepp’s analysis stems from a review of 93 office loans outstanding in metro Atlanta that have a collective balance of $3.2 billion. Of the $662 million in loans that were in special servicing in August, $371 million were current on mortgage payments. But some of those loans classified as current could face trouble ahead. “With the assumption that not all loans will be modified, this will continue to put pressure on the delinquency rate going forward,” says Paul Mancuso, a vice president with Trepp.

Another $1.2 billion in CMBS office loans in metro Atlanta were included on the master servicers’ watch list, which brings the percentage of loans in special servicing or on the watch list to 60% of the total outstanding volume.

Used by the industry as an early warning indicator, the watch list designation is not a sure sign of imminent default, but serves as another reminder that the potential exists for more Atlanta office loans to become distressed if conditions do not improve. Trepp also is closely tracking any drop in net operating income at office properties backing CMBS loans (see chart below).

Why is the local office market so troubled? Atlanta’s residential and commercial real estate markets became symbols of irrational exuberance in the mid-2000s, says Mancuso. “In large part, the drivers of this decline were overexpansion during the market’s boom time and the subsequent economic fallout, which has greatly impacted the local employment picture and the need for office space.” Metro Atlanta’s unemployment rate in August stood at 10.4%, well above the national average of 9.6%

According to Trepp, $143 million of delinquent office CMBS loans in metro Atlanta are currently underwater based on recent appraisals, meaning the mortgage exceeds the value of the property. “This will negatively impact the ability to work out these loans outside of a distressed scenario,” says Mancuso. (For a look at the top 10 delinquent office loans in metro Atlanta by loan balance see the chart below.)

Eli Green, senior vice president of The Carter Real Estate Funds based in Atlanta, estimates that office investment sales locally ranged from $16 billion to $18 billion between 2004 and 2008. A large chunk of those transactions were financed with CMBS debt. And that doesn’t take into account the number of office buildings that also were refinanced with CMBS debt. “So, that’s an enormous volume of securitized debt that was put into place at values and [loan terms] that weren’t anticipating this fall.”

Approximately 1.6 million sq. ft. of new space has already been delivered to the market this year and that total is expected to reach 2.3 million sq. ft. by year’s end. Four office towers account for all of the new construction, including three in Buckhead and one in Midtown.

In March, Daniel Corp. completed the construction of a 39-story, 725,000 sq. ft. office building in Midtown. The 1075 Peachtree Street tower is a speculative project and part of Selig Enterprises’ $2.5 billion 12th & Midtown mixed-used development to be delivered in phases.

The combination of aggressive development and anemic tenant demand for space has proved to be the market’s undoing. During a two-year stretch ending in 2009, some 3.5 million sq. ft. of new office space was delivered to the market. But net absorption during the same period was a negative 2.6 million sq. ft., according to Reis. While the development pipeline has dried up, tenant demand remains weak. From July 1, 2009 to June 30, 2010, net absorption was a negative 1.58 million sq. ft. (see chart).