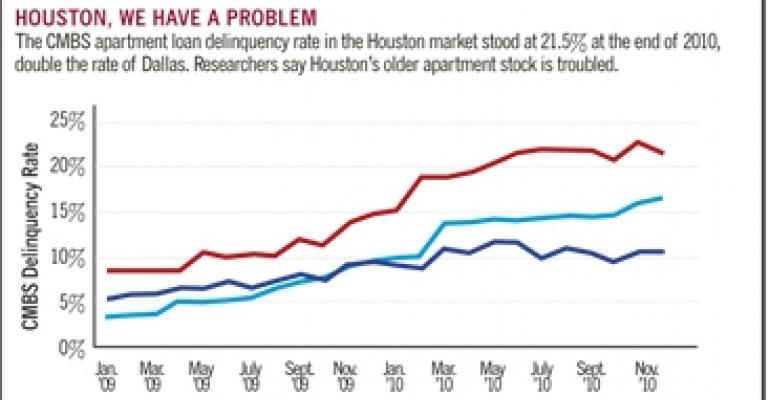 While Houston’s economy continues to outperform much of the nation, the same can’t be said of the local apartment market, leaving some researchers to scratch their heads and ask why.

The 21.5% delinquency rate on securitized apartment loans in metro Houston as of December 2010 was much higher than the national average of 16.5% and double the 10.6% delinquency rate recorded in Dallas, according to researcher Trepp LLC [see chart].

As of November 2010, the unpaid principal balance on Houston apartment loans held in commercial mortgage-backed securities (CMBS) was $3.7 billion, Of that total, $848 million was 30 days or more delinquent and $777 million was seriously impaired, or at least 60 days past due.

“It is surprising that Houston is classified in the same category as the Atlanta, Phoenix, Cleveland, Tampa and Miami markets, all of which have multifamily delinquency rates north of 20%,” says Paul Mancuso, a vice president with New York-based Trepp.

“With stable oil prices, a relatively low unemployment rate and a housing market that largely avoided the unsustainable run-up in prices, Houston entered the downturn much later than most parts of the nation,” adds Mancuso.

But even after the local economy hit a rough patch due partly to contraction in the oil and gas industry, Houston’s current unemployment rate of 8.3% is still well below the national average of 9.4%

Looking for answers
Of the $777 million in seriously impaired loans in the Houston apartment market today, lenders originated 71% of that volume during the notoriously lax underwriting period of 2005 through 2007, reports Trepp. That’s when the economy was booming and commercial real estate was riding high.

Local broker Jeffrey Fript, a senior associate in the National Multi Housing Group of Marcus & Millichap, says Houston’s high CMBS apartment loan delinquency rate doesn’t surprise him. After all, Houston is the fourth largest city in America based on population.

Houston also was one of the most active markets for CMBS loan originations from 2005 to 2007, says Fript. “It’s a big market, and a lot of people refinanced with CMBS. Along with that comes a high delinquency rate.”

The stresses on the Houston apartment market come to light when comparing the performance of the newer and older stock of properties. Among a sample of 72,835 units built in the 1970s, the average occupancy rate in the fourth quarter of 2010 was 85.5%, according to MPF Research, down 0.8% from a year earlier. Annual rents fell 1.7% during the same period [see table].

Many owners of older properties, particularly at the lower end of the market, find themselves trapped in a vicious circle. “If you never get the rent and occupancy up in the older product, you never have the money to upgrade it,” says Greg Willett, vice president of research and analysis for MPF Research based in Carrollton, Texas.

Apartment product from the 1970s or earlier comprises a bigger share of the total base in Houston than Dallas/Fort Worth, and the performance in that bottom-of-the-market segment in Houston is a disaster, says Willett.

“If you have a job in Houston and you can afford that middle to higher-end product, there is no reason to rent the lower-end product,” he emphasizes.

The occupancy rate in the third quarter of 2010 for the Houston apartment market stood at 89.4%, well below the peak of 94% reached in the fourth quarter of 2005. The relatively soft occupancy rate has given tenants the upper hand in the marketplace.

Not all submarkets are alike
While Fript describes the apartment market in Houston as generally strong overall, he points to some submarkets that continue to struggle. Southwest Houston, which contains plenty of apartment properties built in the 1970s, has experienced a fair number of foreclosures. “Fannie Mae is not really lending any money in Southwest Houston because of the foreclosures, and that is where the older stock is,” says Fript.

Another reeling submarket stung by a lot of foreclosures is Greenspoint, located near Bush Intercontinental Airport and I-45 about 15 miles north of downtown Houston. “Greenspoint,
Southwest Houston and Northeast Houston are where a lot of people refinanced during the frothiness of the market. Those pro formas didn’t materialize,” says Fript.

The Greater Houston Partnership projects a net gain of 18,200 private sector jobs for the Houston area in 2011. While that’s well below the normal growth of 50,000 to 60,000 jobs annually during periods of economic expansion locally, it’s better than having the workforce shrink, as was the case in 2009.

Houston lost 135,400 jobs during the recession, according to the Greater Houston Partnership. (That’s a seasonally unadjusted figure.) The oil and gas industry, Houston Medical Center and the high-tech field are expected to spark hiring once again.

With less than 1,000 apartments due to come on line through early 2012 and job growth starting to accelerate, apartment demand should remain strong, says Willett of MPF Research. “Thus, look for occupancy to get a big bump and rent growth to get back to a healthy level.”

Sound investment advice
Fript advises apartment investors to separate the wheat from the chaff when it comes to choosing submarkets in which to buy properties. Katy, a Houston suburb, is considered to be a smart play because several corporations are headquartered nearby.

“I would look at jobs and rent growth over the last 12 months,” emphasizes Fript. “Are the rents stabilizing or increasing? I would look at concessions. There was so much new construction in certain submarkets that [apartment owners] had to fill up their assets and give away the farm. They were giving away two to three months rent.”

Investors should avoid submarkets with weak job prospects, even if attractive buying opportunities emerge, urges Fript. “Even if they were able to buy a foreclosed property and put money into it, what’s the best occupancy they could ever get? And if they got rid of all the bad tenants, what are they going to re-tenant with? It’s the same pool.”