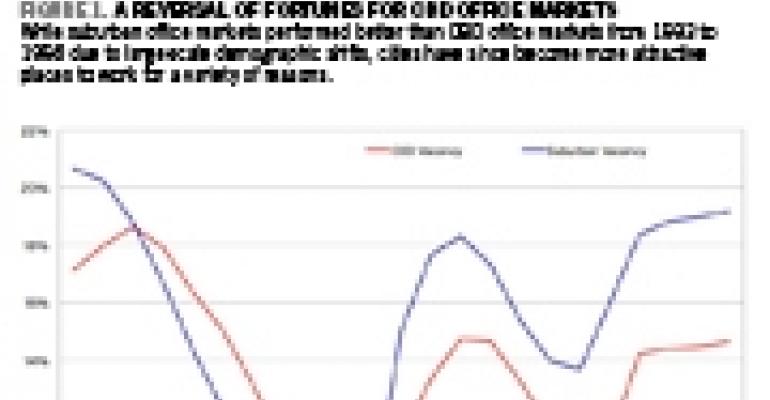 Why Suburban Office Markets Will Continue to Flounder

In my August column, I hinted that office fundamentals may bottom by the end of the year. The latest monthly data shows that the national vacancy rate fell from 17.6% in September to 17.5% in October. This is the first decline in vacancy recorded since the third quarter of 2007.

However, the performance of office buildings located in central business districts (CBD) is starkly different from how properties in suburban areas have fared. CBDs have absorbed 1.36 million sq. ft. of space year to date through October, while occupied stock declined by 10.4 million sq. ft. in suburban markets. Most positive leasing activity appears to be concentrated in downtown areas, with office buildings in suburbia continuing to shed space.

Suburban office space took the brunt of occupancy declines in the recent downturn. Some 135 million sq. ft. of occupied space has gone vacant since the onset of the recession in December 2007. That’s roughly equivalent to the entire inventory of office buildings in Boston losing all their tenants. Seventy percent of that loss in occupied space came from suburban office buildings.

Vacancy rates in CBD areas have trended lower than suburban markets for most of the past decade [Figure 1]. This was not always the case. In the early 1990s, suburban office buildings were perceived to be the better asset class.

Office vacancies in suburban markets were lower than vacancies in CBD office markets from 1993 to 1998, the result of a large-scale demographic shift of households from crime-ridden cities to suburbs.

As cities emptied out, more jobs were created in suburban markets than downtown areas, and office tenants followed. From 1990 to 1998, developers built 238 million sq. ft. of new suburban office space, roughly three quarters of total new completions that came on line during this time period.

As recently as 1998, the Building Owners and Managers Association (BOMA) International expected suburban office space to be among the top performing real estate products for the ensuing five to 10 years.

The resurgence of CBDs materialized in the late 1990s. City governments took steps to arrest the erosion of their tax base, including aggressively bidding for business in an effort to create jobs and authorizing business improvement districts to generate services that weren’t being adequately provided by local governments.

Climbing out of a hole

Reis expects that office properties in CBDs will drive the sector’s recovery as we emerge from the current real estate recession. There are various reasons for this disparity in performance.

First, landlords of expensive properties in CBDs have had to lower their rents on both an absolute and relative basis more than suburban office properties because of the severity of the downturn. Second, leasing suburban office space in areas adjacent to cities has gotten relatively more expensive over time as higher rents followed community improvements.

The combination of these two factors implies that tenants no longer need to pay as much of a premium to locate their headquarters in a Class-A building in the heart of downtown.

Third, the housing market crash and the moribund job market appear to have exacerbated the plight of suburban office markets. The appeal of suburban office buildings rested largely on proximity to employee residences, helping cut commute time and transportation costs. However, as single-family home prices continue to hug the bottom and job growth remains tepid, job creation may remain depressed in suburban areas.

However, improvements in information and mobile technology from 2000 to the present imply that a lot of office work can be done from home, reducing commute time to zero. CBDs will continue to attract workers in service industries like finance and law because of the need for face-to-face interaction.

Trends that support working from home have yet to seriously impact overall demand for office space, but on the margin it may mean less demand for suburban office space.

Reis expects the national office vacancy rate to peak at approximately 17.5% by the end of the year, and decline to 17.2% by the end of 2011. Even if job growth remains unspectacular, the office sector should absorb about 25 million sq. ft. of space in 2011, given favorable supply conditions.

Most of these positive developments will be concentrated in CBD areas while suburban markets continue to flounder.