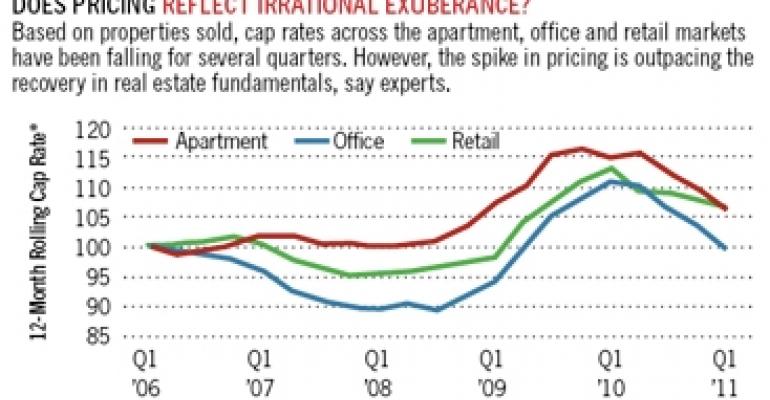 After rising 300 to 500 basis points in 2009, average transaction-based cap rates fell in 2010 through early 2011. Why have cap rates fallen so quickly when fundamentals have yet to show meaningful gains? Won’t cap rates increase if inflation and interest rates begin to rise?

Cap rates represent the initial return to the investor based on the purchase price and the annual net operating income the property generates. This definition often leads to confusion. Consider this seemingly straightforward statement: “A rise in cap rates implies a decline in property value.” This is not necessarily true.

Here, an increasing cap rate is coupled with a rise in value. The subtle distinction is that the numerator increased faster than the denominator — the property’s income growth outstripped its value increase, pushing cap rates up.

Property incomes are recovering. The office vacancy rate nationally fell to 17.5%, in the first quarter, the first drop in three years. Effective rents also grew for the second straight quarter.

With property income rising, investors surveyed by the Pension Real Estate Association expect values to increase. PREA respondents expected income returns to increase 6.3% in 2011, and anticipated returns from value appreciation to rise 4.6%. With incomes rising faster than value, we should expect cap rates to increase in 2011. Right?

In a presentation to the National Council of Real Estate Investment Fiduciaries (NCREIF) last November, Reis senior economist Ryan Severino noted that most forecasters expected cap rates to fall over the next two years.

“I had a rather amusing time explaining why Reis expected overall cap rates to rise in 2011 when the consensus seemed to be that cap rates would continue to fall,” recalls Severino. “The reasoning was that values would continue to appreciate in 2011, given recovering fundamentals, and robust appetite for commercial real estate as an asset class.”

Representatives from firms surveyed by PREA attended the same event. How do we reconcile these divergent, and seemingly inconsistent, expectations?

Transaction-based cap rates calculated using the pool of properties that traded in a given period may indeed decline. However, that may simply represent a sliver of assets that managed to find a buyer and seller to agree on a price.

If investors expect a large proportion of transactions to come from high-quality assets that trade at ever declining cap rates, then transaction-based cap rates will register a drop.

Declines in cap rates through 2010 were primarily driven by large trophy assets trading in major metros. Risk-averse investors shied away from tertiary markets. The same dynamic may continue to drive down cap rates in 2011.

The rest of the asset pool that didn’t transact may experience value increases that are outstripped by recovering incomes, implying rising cap rates.

Expectations of higher inflation may lead the Federal Reserve to begin increasing interest rates by next year. Higher inflation and interest rates imply that the value of assets that entail some risk, like commercial real estate, will decline versus relatively less risky assets like U.S. Treasuries. This implies upward pressure on cap rates in 2012.

Higher interest rates that drive up cap rates will not necessarily imply a decline in commercial real estate values. It simply means that increases in value will slow down. Coupled with the continued recovery in drivers of income like rents and occupancies, that implies rising cap rates in 2012.