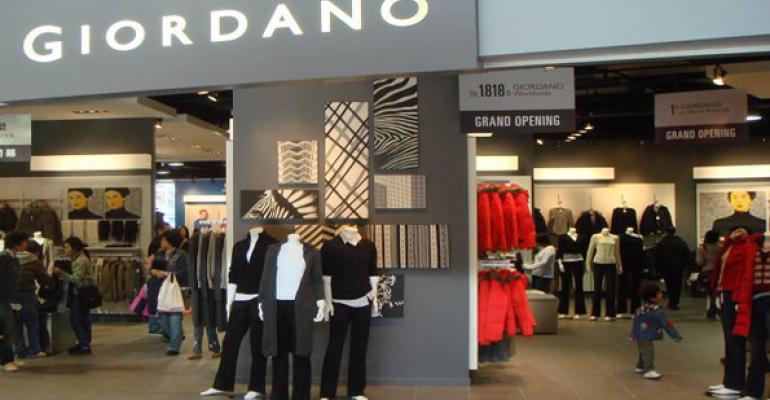 Lau: Retailers Need to Localize and Adapt to Thrive in China

A native of Hong Kong who lived in Canada for years and returned home in 1987 to help run one of Asia’s best-known specialty apparel retailers, Peter Lau has cultivated a truly global perspective on retailing, including a deep understanding of the Chinese market.

Lau spent his early years in Hong Kong and moved to Canada during high school. He spent the next 17 years in Canada, including several years working in the government sector and petroleum industry there.

In 1987 he was recruited by the founder of Giordano International Ltd. to serve as COO. He became chairman and CEO in 1994 and has overseen the company’s continued expansion throughout the Asia-Pacific and Middle East regions and Mainland China.

He will be among the speakers at this year’s ICSC Retail Real Estate Summit, Sept. 11-14, in Shanghai.

China is now Giordano’s largest market. How has the retail real estate sector changed since Giordano first entered the country in the early 1990s?

Peter Lau: When Giordano first entered the market, shopping centers were built and run by local Chinese companies and, unfortunately, did not meet global standards in terms of management and maintenance and retail mix. As more foreign real estate companies go into China, they have upgraded the shopping center sector. Even local companies are starting to learn and change their practices. Department stores are also improving their standards of operation.

The American-style shopping center will probably prevail in Northern China, where there is more space and more flat land. In the Eastern and Southern China, shopping centers will be influenced by the Japanese model, multi-story centers on smaller parcels with restaurants on the top levels and slightly smaller shops.

What advice would you give foreign retailers and shopping center developers who are new to China and other parts of Asia?

Peter Lau: I would caution foreign operators coming into China not to forget that in the early ‘90s many foreign companies there complained that they lost money there. What they should be concerned about is not just how much they are able to make, but how much cash flow they can realize and get out of the country in an orderly way. Sooner or later, you should be able to get your cash out. By the end of the day, business is about cash flow.

My advice to developers is to build a lot of flexibility into their design. Be prepared to do major renovation work every three to five years. It is also important to get traffic into the shopping center during opening season.

A lot of developers want to attract luxury brands right away, but that can come later. Be picky (in term of leasing) but don’t be too stubborn, insisting on high-class international premium brands right away. I’ve seen people end up running a ghost town for two to three years after opening.

How do Chinese consumers differ from consumers in other parts of the world?

Peter Lau: The Chinese consumers are like children today compare to Americans. Coming out of the Cultural Revolution and tight-fisted Communist rule, they traveled to places like Seattle and Vancouver, British Columbia. Many are quite worldly, but many are not. Many ponder whether they want to stay in China or become American citizens. Americans don’t think like that. They always consider themselves Americans.

With this uncertain identity, Chinese consumers are somewhat fickle in terms of trying out brands. When overseas brands come into the country, the Chinese will try them, and foreign brands have the advantage of reputations precede them. But retailers need to immediately look at how they localize and adapt, and respect the local culture and icons. Before the honeymoon is up, foreign retailers will have to deal with the risk of becoming stale and with the risk of inventory management. Management of their local staff is also very important.

The biggest risk of the foreign brands coming to China is how do to manage their operation in such a way that they bring back cash, meaning generating real profit and finding ways to repatriate their profit back to their headquarters.

What are some of the most promising markets in Asia from a retailing perspective?

Peter Lau: Korea is a promising market. We are doing quite well there. Brands such as H&M, Zara and Uniqlo are in the Korean market now. Real estate is getting expensive, but the government has managed the economy quite well. Everyone is suffering a bit because of the situation in Europe, but he Koreans are holding up quite well. Mainland China is still our focal market, given the long-term potential and the size of the population.

What is your outlook for the Chinese economy?

Peter Lau: We are at the beginning of a down cycle in China. Virtually all operators in China are experiencing cooler customer sentiment. Brands big and small are on sale, and demand has dropped fairly rapidly since the Chinese New Year.

Everyone is talking about the new government that is supposed to be coming in around September, but there are rumors that will it will be delayed until the end of the year or next spring. People are saying that once the new government is settled in, the new cabinet will bring out economic policies to help prop up the economy, much like the government did in 2008 and 2009.

Ultimately, I don’t believe that the Chinese government will go back to an export-driven economic paradigm. It will want to go with a strategy that increases domestic consumption. I also don’t think the Western world would want to allow the Renminbi to be devalued like it was five years ago. Even Americans are talking about shifting production back to American soil. So the only way out for Chinese is to get the domestic spending up.

China has not been used to stability so people still worry about saving for rainy days, unlike North Americans who have enjoyed stability and peace on their soil for so long. Also in North America and Europe, the social safety net is stronger than in China so people feel better about spending. Eventually the younger generation will likely not remember the hardship their parents and grandparents endured and become more free spending.