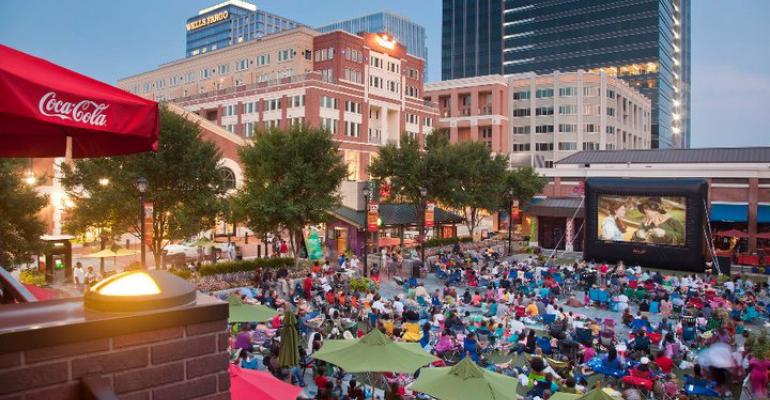 In 2010, North American Properties (NAP) and CBRE Global Investors bought the ailing mixed-use property Atlantic Station in midtown Atlanta for $78.5 million—a significant discount since it had been priced at over $100 million upon completion in 2005. But the property had become a hangout for gang members, sales were declining, the place was deteriorating and local real estate bloggers had included it on their “Death Watch” list.

The project was challenging, to say the least. Yet Mark Toro, managing partner for NAP, was undaunted, and his plans were innovative and promising enough for NREI to feature the project on its cover in May 2011. Our accompanying story, Turnaround Artist, focused on the challenges of not only reinventing Atlantic Station but helping revitalize Atlanta’s midtown.

Under Toro’s supervision, NAP established a new code of conduct for the station, installed onsite security and enacted a re-merchandising plan to attract fresh, trendy tenants. Toro’s goal was to make Atlantic Station more than just another retail district, so he helped usher in public activities like yoga in the park, sunrise worship services and outdoor concerts and established new, chef-driven restaurants.

In March, Atlantic Station went back on the market, having signed 34 new leases, including Athleta and Yard House, won several awards, and increased in value. NREI talked with Mark Toro about the property’s transformation. An edited transcript of that interview follows.

NREI: NAP had some heavy lifting to do when it came to reinventing Atlantic Station, and you used some innovative means, including social media to gauge potential residents and customers’ needs—which included the major undertaking of ridding the place of thugs and providing better security. How did all of that work out, and what were some of the other innovative approaches NAP took to solving the facility’s problems?

Mark Toro: First and foremost, we listened. Through our social media channels and on-property interviews, we polled our guests, and the community at large, to identify what needed to be done to make Atlantic Station their "third place." What we heard loud and clear was that we had to assure that our guests felt safe and secure when they visited Atlantic Station. We took an "iron fist in a velvet glove" approach to loitering and negative energy, creating a program we call "Expect Respect." At the same time, we terminated the leases of four restaurants that had morphed into nightclubs, attracting a crowd that was not in keeping with the direction we had set for the property. We took advantage of the fact that Atlantic Station is private property, and we were able to very strictly and consistently enforce a code of conduct that emphasizes civility and respect. The bad actors that had made Atlantic Station their living room got the memo and went elsewhere, allowing us to realize the full potential of our city-within-a-city. Not only were we then able to sign dozens of new leases and drive retail sales, but the hotel, residential and office properties also thrived because we had created a guest experience that people found uniquely attractive.

NREI: You were basically charged with the task of making a mall appeal to what’s considered an anti-mall generation. You seem to have accomplished that through making it a very experiential place. How exactly would you say you won people over? Do you have a demographic breakdown of the people who frequent Atlantic Station?

Mark Toro: One of the most significant changes we made was to bring tenets of the hospitality industry to a retail environment. We focused on such things as music, lighting, valet and concierge, training everyone on the property in service delivery. Borrowing from such properties as Santana Row and The Grove, we created an experience that had not existed in metro Atlanta before. We focused on "heart share," not market share, assuring that our guests felt good about the time they spent with us. Merchandising to meet the market was another significant factor, bringing chef-driven restaurants and local boutiques who would appeal to an "anti-mall" demographic we call the "new class consumer"—someone who appreciates an environment that fosters new ideas and embraces cultural experiences, technology, community, walkability and convenience.

NREI: How have sales per sq. ft. increased since NAP took over, for both stores and restaurants?

NREI: What was the occupancy rate of Atlantic Station when NAP came on board as compared to now? What are some of the leasing highlights?

Mark Toro: We bought Atlantic Station in December of 2010 at 82 percent occupancy, deleasing to 70% to provide the opportunity to remerchandise to meet the market. We are now at 91 percent.

Mark Toro: Regal is the nation's premier operator and they've got a behemoth here at Atlantic Station, 16 screens and almost 100,000 sq. ft. It draws from around the Atlanta metro area due to its access and parking, not to mention the fact that The Atlantic Station Experience—and 19 restaurants—make for a great night out.

NREI: Since NAP took over, Atlantic Station has won seven MAXI awards from ICSC. Was the facility an award winner prior to that? Could you comment on these awards and what they mean for Atlantic Station?

Mark Toro: Make that eight awards—we won another MAXI this year! I believe that the grand opening was a MAXI winner in 2005, but the property went eight years without winning another. The fact that Liz Gillespie and her team have won 8 in the last three years is testament to the fact that we've taken a fresh approach to marketing and communications, reaching our industry and our community like never before. It validates our approach and offers encouragement for Liz's team to continue to innovate.

NREI: How is Atlantic Station impacting its neighborhood?

Mark Toro: Not only have the office, hotel and residential products on the Atlantic Station property seen an incredible spike in value, the "halo effect" now extends to West Midtown and Home Park. The best example of the impact we've had on surrounding properties is a new apartment community called SteelWorks across the street from Atlantic Station. It is not only far outperforming it's rental rate projections, but the lease-up is setting records for the entire Atlanta metro area.

NREI: Atlantic Station was an incubator for Avalon in Alpharetta, Ga., which opened last fall. Tell us about Avalon and how it’s faring.

Mark Toro: We like to say that at Atlantic Station we "bought the box and created the experience around it" and at Avalon we "created the experience and built the box around it", starting with a blank canvas and painting a picture of exceptional guest experience. A great example is our skating rink, which was a makeshift facility at Atlantic Station, but was incorporated into the design of Avalon so that the rink would be exactly the same dimensions as the Rockefeller Center rink. Another aspect that was incubated at Atlantic Station and refined at Avalon is Concierge. We recently brought on Matt Simon, formerly General Manager of The Grove in Los Angeles. Matt started in the Caruso organization as a concierge and has continually advanced the deployment of hospitality and service in the retail environment.

NREI: NAP recently placed Atlantic Station on the market. What is the development’s worth now? How much has that increased?

Mark Toro: I won't speculate what Atlantic Station will fetch in today's white-hot capital market, but one thing is for sure: It is now a trophy asset that many investors will reach for. Whereas you may not be surprised that we are sellers, given the frothy capital markets, you may be surprised to know that we may also be buyers. We've already had investors tell us "if you're still in, we are a player." Stay tuned!

Mark Toro: The turnaround of Atlantic Station afforded us access to the ultimate "living lab" to redefine how we look at mixed use properties and to respond to a paradigm shift in consumer preferences. No longer will retailers survive by just selling their wares and no longer will we, as landlords, survive by just leasing space. We've got to provide an experience for our guests that will get them off their couches and out from behind their keyboards, driving sales in bricks and mortar retail to assure the long-term stability of these assets.