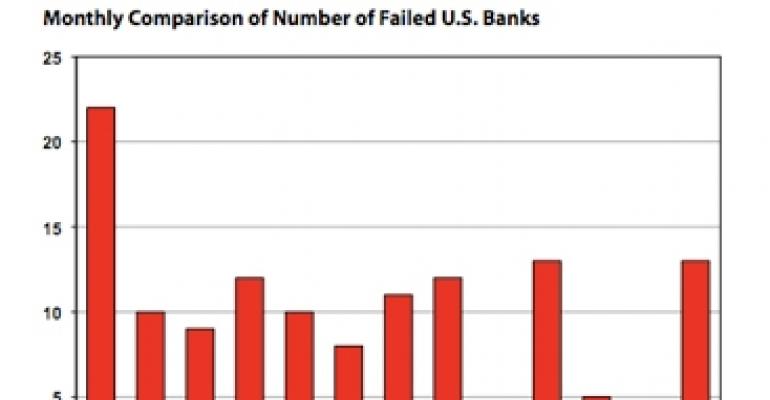 Thirteen U.S. banks failed in July, raising the total number of failures to 61 through the first seven months of 2011 and putting the annualized pace between 100 and 120, according to New York-based Trepp LLC. The number of bank failures in July was up sharply from four in June and five in May.

More than 250 banks on the Trepp Watch List remain at an elevated risk of failure. Among these high-risk banks, the greatest concentration is in Georgia (49 banks), Florida (37), Illinois (28), Minnesota (16) and North Carolina (13). These states are most likely to continue to experience bank failures in the months ahead, say Trepp researchers.

Seven bank failures in July occurred in the Southeast, four in the West, and two in the Midwest. Two failures occurred in Georgia, which continues to lead the country in bank failures with 16 year-to-date through July and 68 since the cycle started in 2007.

The largest failed bank was Integra Bank in Indiana, with $2.2 billion in assets, or a little more than one-third of the total assets for the banks that failed in July. The closure was the first in Indiana this year and the second since 2007.

The residential real estate loan category was second, with $161 million in nonperforming loans, or 16% of the total nonperforming balance. The remaining 7%, or about $72, million, included commercial and industrial (C&I) loans and consumer loans.

Nearly half of the $797 million in nonperforming commercial real estate loans (47%) at the failed banks were in the form of construction and land loans.

Meanwhile, the loss severity eased in July with the estimated cost to resolve the failed banks falling to 19% of failed bank assets, in comparison to 25% in June and 26% in May, according to Trepp.

In a loss-sharing arrangement, the FDIC agrees to share in loan losses that may be incurred by the acquiring healthy bank as a direct result of any nonperforming loans that it acquires from the failed bank.

The loss-sharing agreements also make it possible for the FDIC to share in any recoveries on nonperforming loans.