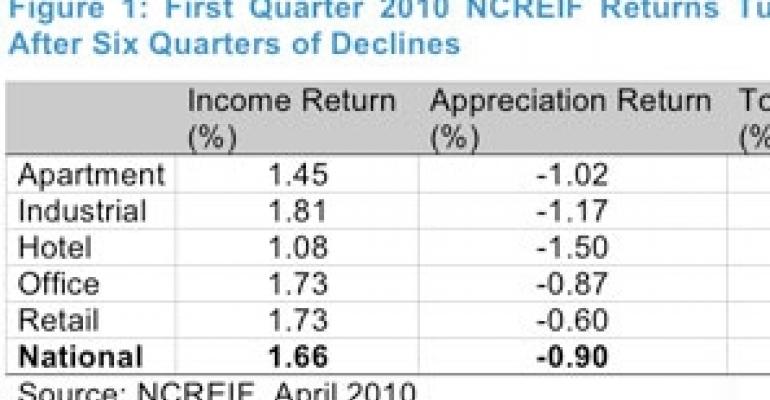 Real estate capital markets continue to improve. As investor sentiment rebounds, there is a large amount of equity capital chasing a relatively constrained supply of for-sale core assets. This increased liquidity has helped to boost sale prices for core assets in primary markets by more than 10% over the past few months.

On the CMBS front, all tranches have rallied appreciably. Spreads on the AAA CMBX index have narrowed by more than 100 basis points during the first quarter of 2010.

According to Real Capital Analytics (RCA), distressed assets in the U.S. surged to $234 billion as of March 2010. We expect the amount of distress to continue to grow as more loans mature over the next three years.

Although some of the loans will be restructured and extended, we expect to see good debt and equity opportunities for well-priced and/or distressed investments in 2010 and 2011.

The NAREIT Equity REIT Index gained 10% during the first quarter, outperforming the S&P 500 Index (5.4%). Improved access to both debt and equity markets is helping to fuel REIT performance.

Meanwhile, the NCREIF Property Index (NPI) posted a total return of 0.76% during the first quarter, following six consecutive quarters of negative returns [Figure 1]. The income portion of the quarterly return was resilient at 1.7%, but prices depreciated by 0.9%. The total return was positive for all property sectors except lodging.

Our review of a wide variety of market metrics suggests that commercial real estate transaction volume may have bottomed out over the past few months. National transaction volume across all five property sectors totalled $15.6 billion in the first quarter of 2010, improving from $10.5 billion during the same period a year ago [Figure 2].

The average capitalization rate — the initial yield to investors based on purchase price — for all property transactions over $5 million declined 20 basis points to 7.8% in the first quarter of 2010, but was still up 40 basis points from the same period a year ago.

Industrial — The national average industrial vacancy rate increased by 10 basis points to 14% during the first quarter of 2010, according to CBRE Econometric Advisors. Although the vacancy rate has risen for nine consecutive quarters, the pace of increase has clearly moderated.

Thirty-five out of 61 markets reported vacancy increases from the previous quarter. On a positive note, industrial supply is constrained in many markets, which should help to counter-balance vacancy in the near future.

We expect an average of 46.7 million sq. ft. of warehouse space to enter the market annually from 2010 to 2012, which is less than one-third of the 10-year historical average.

Multifamily — The multifamily sector has shown encouraging signs of stabilization. Effective rents turned positive during the first quarter of 2010, ending five straight quarters of decline, and signaling that the worst for the apartment sector may be over.

During the first quarter, net absorption surged by 21,000 units despite a traditionally weak rental season from January to March. More than 22,000 new apartment units were delivered to the market during the quarter, and the national average apartment vacancy rate remained unchanged at 8%.

Asking and effective rents in the apartment sector increased by 0.1% and 0.3% respectively over the quarter as landlords began to tighten concession packages.

More than $300 billion of apartment assets traded hands from 2005 through 2008, many of which were underwritten with aggressive assumptions and/or financing. The default by Tishman-Speyer and Blackrock Inc. on $4.4 billion in debt to finance the $5.4 billion purchase of Stuyvesant Town-Peter Cooper Village exemplifies these challenges.

Multifamily transaction volume improved to $4.4 billion during the first quarter, up from $2.3 billion a year ago. The average cap rate on transactions declined 40 basis points to 6.8% during the quarter and is essentially unchanged from the same period a year ago.

During the first quarter of 2010, NCREIF reported a total return of 0.42% for the multifamily sector, underperforming the overall NPI.

Office — The office sector is experiencing positive momentum. Central business districts (CBDs) in markets such as New York City and Washington, D.C., which have benefited disproportionally from the government bailouts, are rebounding more quickly than other CBDs and most suburban markets.

For example, the New York metro lost approximately 110,000 office-using jobs through this downturn, far less than the approximate 180,000 lost during each of the previous two recessions.

The national office vacancy rate rose 30 basis points to 16.6% in the first quarter of 2010. The vacancy rate has increased for 10 consecutive quarters, but the pace appears to be easing.

In the first quarter of 2010, office transaction volume totaled $5 billion compared with $4.6 billion in the previous quarter and $3.7 billion during the same period of 2009. The increase is due at least partly to the improving capital markets.

The average cap rate for transactions declined 120 basis points to 7.9%, returning to the same rate as one year ago. The NCREIF office sector posted a total return of 0.86% for the fourth quarter, slightly outperforming the overall NPI.

Retail — Increasingly confident about the outlook for the economy and labor market, U.S. consumers are slowly opening up their wallets. As of March 2010, consumer spending had risen steadily for five straight months. Retail sales have increased for the past four months.

Many retailers reported better-than-expected sales and earnings in the first quarter. Total retail sales during the first quarter were up 1.9% over the previous quarter and up 5% over the same period a year ago. Luxury sales in particular have rebounded more quickly than other segments.

We are cautiously optimistic about the retail sector going forward. We believe that consumer spending will likely remain less robust in the near future as consumers continue to deleverage and home values remain depressed.

The national vacancy rate for neighborhood and community shopping centers rose 20 basis points to 10.8% in the first quarter, due largely to 2.6 million sq. ft. of negative net absorption.

Landlords are facing pressure from downsizing and bankrupt tenants, and also from tenants who are trying to renegotiate favorable leases during this distressed environment.

As a result, both asking rents and effective rents declined by 0.8% over the quarter. Regional and super-regional malls also suffered from a difficult leasing environment, with average vacancy rising 10 basis points to 8.9% and asking rents falling by 0.6% over the first quarter. This marks the sixth consecutive quarter of declining asking rents.

Retail transaction volume totaled $3.1 billion in the first quarter of 2010 compared with $2.2 billion during the same period in 2009. The average cap rate on transactions rose 10 basis points to 8.3% during the quarter, which is 90 basis points higher than a year ago.

The retail sector achieved a total return of 1.1% during the first quarter, the best performing sector within the overall NPI.