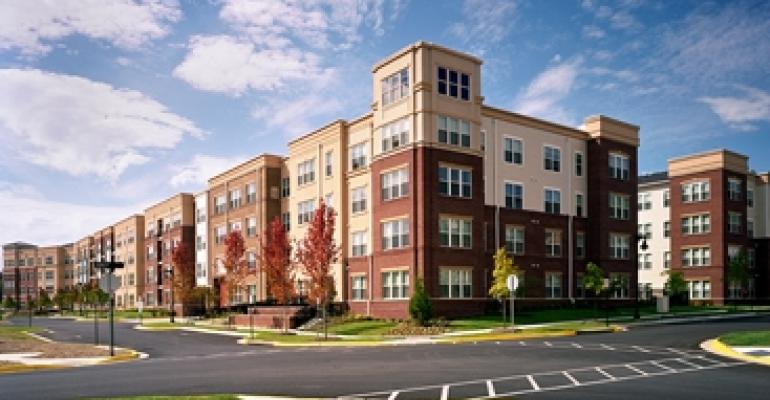 A rebound in apartment demand has propelled the stock prices of multifamily real estate investment trusts (REITs), making them some of the best performing companies in the market.

For the 12-month period ending Sept. 15, apartment REITs generated a 50% total return, according to Charlottesville, Va.-based SNL Financial. That’s nearly double the total return of 26% among all REITs over the same period. (Total returns measure stock price appreciation or depreciation plus dividends.)

But investors have driven up apartment values in anticipation of good times ahead for the sector, even though many are still charging less in rent than they were a few years ago.

Most publicly traded apartment REITs reported a decline in net operating income (NOI) on a same-property basis in the second quarter compared with the same period a year ago.

“There’s more risk than reward in apartment stocks at these levels,” says Lawrence Raiman, portfolio manager of the Rhino Income Opportunity Fund, which primarily invests in the preferred stocks of REITs. “If the economy turns down, we have a bad jobs number, or if interest rates pick up for any reason, the stocks could get hurt.”

Nevertheless, apartment REIT executives are more bullish about a fundamental recovery than their office, warehouse and shopping center owner brethren. A declining home ownership rate, decreasing tenant turnover and constricted supply are helping to push up occupancies and rents sooner than even multifamily REIT officers expected.

Apartment landlords also are getting a surge in demand from “unbundling,” a process in which employed individuals with renewed confidence about their job security leave roommates or parents to live on their own.

In fact, apartment REIT executives expect to report better funds from operations (FFO) for 2010 than they originally thought. Eleven of the 12 multifamily REITs that provided FFO guidance early in the year raised those estimates after the second quarter.

Most apartment REITs also reported a boost in year-over-year average occupancy in the second quarter, which typically hovered around 95%. The national occupancy rate stood at about 92% in the quarter, according to Reis.

“The dynamics for apartments over the next couple of years look pretty darn good,” says Michael Salinsky, a REIT analyst with RBC Capital Markets in Cleveland.

Analysts wonder about the depth of the current rental demand and how long great expectations can keep apartment stocks in the black.
In particular, the question of employment pesters the multifamily sector perhaps more than any other. Ultimately apartments need new household formation for consistent growth, and household formation is dependent upon job creation.

The unemployment rate has stubbornly stayed at 9.5% or higher for more than a year. Nonfarm payroll employment rose by an anemic 229,000 from September 2009 to August 2010, according to the U.S. Department of Labor.

“The apartment REIT sector is the one group that has collectively said the same thing: Unbundling, a declining home ownership rate and a lack of new supply are all contributing positively to fundamentals,” says Richard Anderson, a REIT analyst with BMO Capital in New York. “But I think jobs have to be inserted into the equation to sustain this.”

Nationwide, commercial mortgage-backed securities (CMBS) collateralized by apartments posted a delinquency rate of 14.6% in August, a year-over-year jump of more than 100%, according to New York-based Trepp LLC.

The figures suggest that distress could suppress apartment values. All told, the multifamily CMBS delinquency rate was second only to the hotel sector’s rate of nearly 19%.

On a price-to-FFO basis, multifamily REIT stocks were trading at about 18 times FFO at the end of the second quarter compared with 14 times FFO among all REITs, according to Keven Lindemann, director of SNL’s real estate group. Historically REITs have traded in a range of eight times to 10 times FFO, he says.

“Clearly money has been pouring into multifamily stocks, and they’re trending toward the expensive end of things,” says Lindemann.

Multifamily REIT executives say that this environment is different from past recoveries. They acknowledge that new jobs are critical to long-term growth, and they’re of the opinion that hiring will pick up over the next few quarters as the economy slowly improves.

But pent-up demand coming from unbundling and individuals shut out of home ownership should provide enough activity to boost rents and NOI for the next year or so even with modest or anemic job creation, they contend. Moreover, a lack of new development also will give the recovery some room to run (see sidebar).

Yet at some point the economy needs to create jobs far beyond the current pace of 1 million new hires in 2010 as of the end of August.

“I think you’d still see some positive rent growth, but not as much as we’d like,” says Albert Campbell, CFO of Memphis-based Mid-America Apartment Communities, referring to such sluggish hiring over the longer term. “But if job growth is strong, you will see some real strength in rental growth.”

Mid-America, which owns 44,500 units predominantly in the Southeast, increased its rents by 2.6% in the second quarter this year over the first quarter. But lease rates still remain well below the high levels of a few years ago, Campbell acknowledges.

It’s hard to understate the importance of job growth to the apartment sector. About four years ago at the height of the single-family housing and condominium boom, 25% to 30% of renters moving out of apartments were buying homes, says Anderson. Yet multifamily REITs were still able to generate same-community NOI growth because of the 4.5% unemployment rate, he adds.

“While home ownership plays a role in demand for apartments, jobs are at least of an order of magnitude more important,” explains Anderson.

The falling home ownership rate coupled with an increase in renewals by renters who can’t buy a new home, however, are now giving landlords an edge in the battle for tenants.

“Things got so competitive in our markets with single-family housing that someone looking at one of our communities could fail our standard credit check but go out and buy a home,” says Campbell.

Low down payment programs sponsored by the government, non-existent underwriting, and avaricious bundlers, sellers and buyers of residential mortgage securities propelled the home ownership rate to a historic high of 69% in 2006. But since then it has retreated to about 67%, the same level as in 2000.

The good news for apartment REITs: Every percentage point drop in the home ownership rate represents about 1.1 million potential new renters. Organizations such as the Federal Reserve Bank of New York suggest that the rate could fall to around 62% over the next few years.
In addition to meeting much stricter lender standards, individuals weighing renting versus buying today have a different perception of home ownership compared with the recent past.

“We have a demand driver that’s very different than other sectors,” says Richard Campo, CEO of Houston-based Camden Property Trust, which owns 64,000 units primarily in the Southwest, West and Southeast. “There’s a push toward renting making more sense than owning, and that psychology is huge.”

Anderson, however, questions whether the drop in the home ownership rate will benefit apartments as much as some REIT executives anticipate.

While he recognizes the decline has a positive impact on demand in the short term, he suggests that the home ownership rate will fall only to around 65% or 66% as depressed home prices and historically low interest rates eventually lead to more home sales.

“I think the affordability math will start to work at some point,” Anderson says, “and the economy will get to a middle ground where mortgage companies start making loans again to people who want to buy homes.”

Gearing up for better times

Still, apartment REITs are seizing upon the current upswing in demand and limited new development to expand and position themselves for growth. In August and September, Mid-America Apartment Communities completed a series of acquisitions in Dallas, Nashville and Raleigh, N.C. that added five properties to its portfolio.

The company didn’t disclose prices of all transactions, but Campbell says the purchases included a mix of stabilized and distressed properties that in some cases were roughly 10% to 25% below replacement cost.

Other expansion-minded apartment REITs include Denver-based UDR, which in August acquired projects in Anaheim, Calif., and Baltimore for $116.5 million. Among other pursuits, UDR also has agreed to buy two communities for $138 million in Boston, its initial foray into the market. The company owns about 52,000 units primarily in coastal states.

Meanwhile, Camden is aiming to have as much as $400 million in new development under way by the middle of 2011. Campo says he wants to take advantage of a “wide open” development market that’s available to companies that have capital.

One reason apartment REIT executives remain so bullish about an imminent recovery in rents and net operating income has everything to do with the difference between previous downturns and the current one: This time around the sector doesn’t have a lot of vacancy to burn through, and the development pipeline is emptier than usual.

Falling home ownership and the constriction in supply should push occupancies and rents up more quickly than in a normal cycle, experts contend.

Encino, Calif.-based Marcus & Millichap predicts that apartment developers will add 180,000 units over a three-year period from 2010 through 2012. The brokerage also projects that the average vacancy rate nationally will drop to 5.4% from 8% over that time. That’s a stark contrast from the three preceding years, when 355,000 new units were added to the supply and the average vacancy rate climbed from 5.8% to 8%.

In past cycles merchant builders began to put up new product at the first hint of recovery. But now lenders are making few loans to merchant builders. And when they do, banks require 35% to 50% of a project’s cost in equity. Earlier, builders typically needed half that amount.

“The merchant builder model in the way the business was financed is totally broken,” says Richard Campo, CEO of Houston-based Camden Property Trust, which owns 64,000 units primarily in the Southwest, West and Southeast. “Merchant builders build 85% of the apartment inventory in America, and getting that business ramped up again is going to take time.”

“There is without a doubt excess rental housing supply,” he says. Nearly 3 million single-unit homes were vacant at the end of the second quarter, a decline of about 100,000 units from the end of 2009.

“You can actually rent a house in Las Vegas cheaper than you can rent an apartment,” says Campo. “But the people who live in our apartments are different consumers. They want to live close in, near other people and they want services — swimming pools and somebody to come fix their air conditioning when it breaks down.”