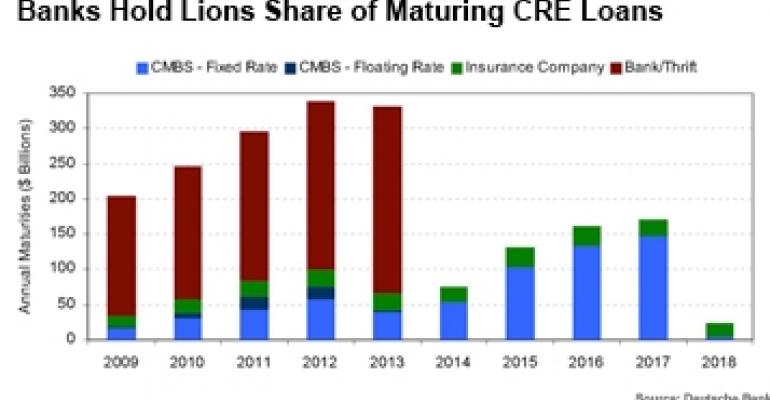 Unless there is a strong and immediate improvement in the U.S. economy, it is likely to receive yet another sucker punch from the $1.4 trillion in commercial real estate loans coming due over the next three years. That’s the conclusion of a 184-page report released by the Congressional Oversight Panel (COP) last week.

Of the approximately 8,100 banks in the U.S., 2,988 are small banks that are dangerously exposed to commercial real estate. In addition to the lack of diversification, these community and mid-sized banks also hold high concentrations of the riskiest and least sought-after loans, including transition properties and construction loans in secondary or tertiary markets, according to the panel.

“A significant wave of commercial mortgage defaults would trigger economic damage that could touch the lives of nearly every American,” the congressional inquiry reported.

The COP, established by Congress in 2008 to oversee expenditures of the $700 billion Troubled Asset Relief Program (TARP), is particularly concerned about the nation’s small banks, because these lending institutions are responsible for about half of all small business loans.

Of the $1.4 trillion in commercial mortgage debt projected to come due through 2014, about half is underwater, meaning borrowers owe more than the properties are currently worth. Since 2007, owners have seen their property values fall by an average of 40%, the report stated.

Ahead of the curve

In late January, the COP held a field hearing in Atlanta on the issue of declining real estate fundamentals and property values and the impact on the banking industry. Property values in the metro Atlanta office sector have fallen by 50% from their peak in 2007. Meanwhile, 30 Georgia banks have failed since August 2008.

“Many experts believe that Atlanta’s experience could foreshadow a problem that could echo across the country,” said COP chairman and Harvard law professor Elizabeth Warren, during the hearing.

Brian Olasov, managing director with Atlanta-based law firm McKenna Long & Aldridge LLP and an adjunct professor at Emory University, testified at the Atlanta hearing, which became part of the COP report. The first step to recovery for the small banks, Olasov says, “starts with the recognition of the scope and the implications of the problem.”

The COP’s findings provide a balanced view of the critical issues facing the commercial real estate industry and the U.S. economy, he adds.

“Here in the state of Georgia, we have one out of three banks under some level of enforcement authority,” explains Olasov, who also provides expert witness testimony in disputes involving commercial mortgage-backed securities.

Who thrives, who dies?

The COP recognizes in the report that if banks are forced to take write-downs on commercial real estate loans, many more will fail, potentially causing serious harm to the nation’s financial system. On the other hand, until the billions of dollars of these commercial property loans are written down, no meaningful recovery can begin.

As a lender, Mesa West Capital co-CEO Mark Zytko is familiar the conundrum expressed in the COP report. “If banks recognized all their losses now, it would most likely translate into a flurry of distressed real estate in the market, which would be good for potential buyers of real estate,” he says. “However, banks would most likely not have sufficient capital levels to survive the extraordinary level of losses across their loan portfolios.”

Prior to the credit crunch, Los Angeles-based Mesa West was primarily known as bridge loan lender. Mesa West has since expanded its business to include making low-leverage loans on cash-flowing properties with strong sponsors.

Federal regulators are now charged with the task of finding a way to work through the bad commercial real estate debt without causing massive small banks failures that would trigger an even more painful and prolonged U.S. economic recovery.

Olasov recommends a structure that would move problem assets out of the banks in a manner that would not impair the banks’ regulatory capital. “What I have in mind is a form of forbearance that moves these assets into the hands of entrepreneurial investors to start maximizing recoveries,” he says.

Currently, many banks are faced with the following scenario: A bank holds a $1 million loan, which it carries on its books at $950,000. Because of the prevailing bid-ask gap in the marketplace, a buyer comes along with an offer of $500,000. The bank would like to remove the loan from its books, but to do so would require it to recognize a loss of $450,000.

“If I do that with respect to a bunch of loans on my portfolio, I become undercapitalized according to the regulators,” says Olasov.

Regulators so far have opted to support banks through a combination of bailout programs and low interest rates, and they’ve allowed the banks to push off the recognition of bad assets for another day, says Zytko of Mesa West Capital.

Some of the more well capitalized banks, however, have been able to start taking write-downs. Mesa West has recently financed two note purchases from banks that were sold between 50 and 70 cents on the dollar.

In addition, Mesa West is currently in the process of closing another loan for a Class-A office building in Southern California that was purchased in 2008 for roughly half its 2006 purchase price.

Both transactions are examples of the availability of capital for assets that have had their values reset, says Zytko. “There is a lot of capital on the sidelines waiting to be invested as this process continues to work its way through the system.”