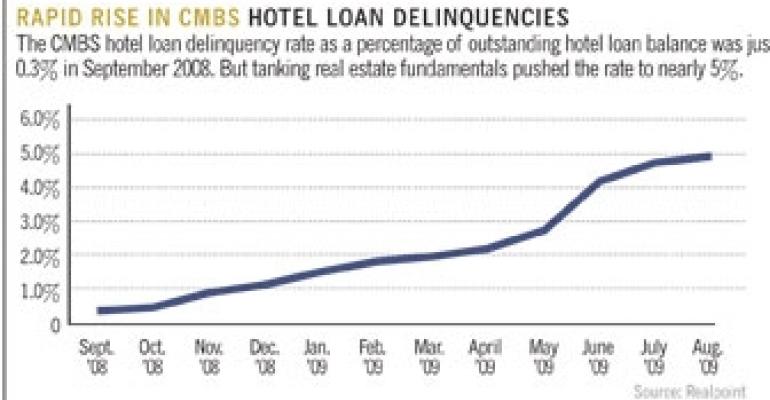 Securitized lenders were heralded as a driving force in commercial real estate finance during the boom years, but in the down cycle the lenders who’ve held loans on their balance sheets through thick and thin will be the catalyst for establishing a floor on hotel valuations and resuscitating a weak property sales market.

That’s the opinion of Charles Tomb, president and CEO of Integrity Hospitality Advisors based in Stamford, Conn. “Once that first big bank or small regional bank starts to come out and say, ‘OK, here is what we’re doing with our balance sheet,’ the others can’t be criticized,” remarked Tomb last Friday in Phoenix during a panel discussion at the 15th annual Lodging Conference. “The visibility of write-downs against their balance sheets — that’s the catalyst.”

As regulators begin to turn up the heat on banks to clean up their balance sheets, the mark-to-market of assets that will ensue will not only help CMBS special servicers better manage the expectations of bondholders, Tomb believes, but it also will stimulate the commercial real estate financing market. “Right now valuations are all over the place. No one knows the value of anything. These opinions of value coming from brokers are pieces of paper that nobody can hang their hat on.”

But exactly when balance-sheet lenders will bite the bullet and take the write-downs is uncertain. Jerome Cataldo, president of Schaumburg, Ill.-based Hostmark Hospitality Group, says a paralysis of sorts has set in industry-wide stemming from a fear of criticism. “You can apply that to the lender, the buyer, the seller, every aspect of the industry. For example the buyer says, ‘ I don’t want to be the first guy to buy at the wrong price. I want to wait for the bottom.’”

What is more certain is that the level of hotel distress is spreading. There are an estimated 650 hotel loans that are in the hands of CMBS special servicers, according to Bill Linehan, executive vice president and managing director of marketing for Atlanta-based Hodges Ward Elliott, a brokerage and investment banking firm. These special servicers manage loans once they go into default and conduct the workout or foreclosure process.

“The staggering number is the watch list, which has over 1,400 hotels that are in technical default, meaning they are most likely going to have a default on their loan,” says Linehan.

The total delinquency rate for CMBS hotel loans 30 days or more past due rose to 4.9% in August, up from 4.7% in July and 0.3% in September 2008, according to Horsham, Pa.-based Realpoint, which has been tracking delinquencies on securitized loans since 2001.

The researcher forecasts that the lodging sector will likely experience an increase in delinquency as both business and leisure travel slow further, resulting in greater declines in occupancy, revenue per available room and average daily rate.

To bolster their standing with lenders and regain the equity they’ve lost in their hotels due to falling valuations, an increasing number of owners are seeking joint-venture equity partners. For example, a REIT or private equity source might take control of the asset and use its balance sheet to work directly with the bank to either renegotiate the loan or seek an extension of the existing note.

As the economy rebounds, one big challenge facing Cataldo of Hostmark is the underwriting analysis. “Even as demand comes back into the marketplace, where is it going to go first, what type of assets is it going to?”