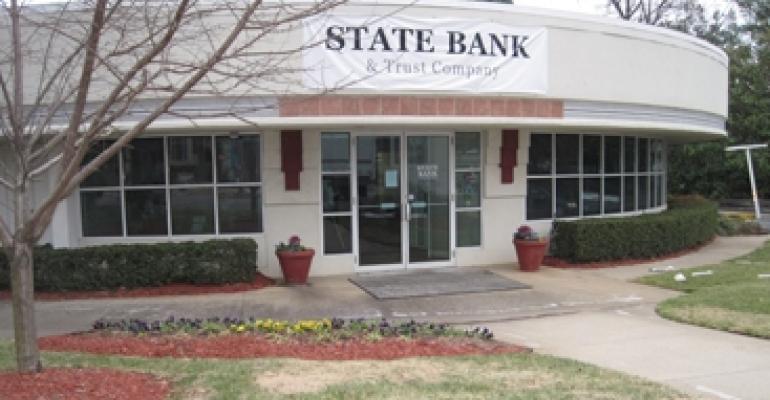 When federal regulators from the Office of the Comptroller of the Currency swarmed into the United Americas Bank in Atlanta last Dec. 17, they executed a quiet but costly Friday night takeover. The bank was tapped out, with $242.3 million in assets and only $193.8 million in deposits as of Sept. 30.

The following Monday, the institution opened as a branch of State Bank & Trust Co., based in Macon, Ga. United Americas Bank was the 155th of 157 U.S. banks to fail in 2010, according to the Federal Deposit Insurance Corp. (FDIC), which was appointed receiver. The FDIC estimated the cost to its insurance fund from United Americas' failure at $75.8 million. Last year's bank closures were up 12% from the 140 that occurred in 2009.

“Usually it's due to loans that have turned sour and there are excessive loan losses that deplete capital. Quite a bit of it has to do with losses from commercial real estate,” says Dean Debuck, a spokesman for the Office of the Comptroller of the currency in Washington, D.C.

The scenario has grown alarmingly familiar. When state regulators shut down the nation's first failed bank of 2011, First Commercial Bank of Florida, in early January, it was no small operation. The nine shuttered branches reopened as part of First Southern Bank, based in Boca Raton, Fla. In the third quarter of 2010, First Commercial was already teetering with $598.5 million in assets and $529.6 million in deposits. The FDIC and First Southern Bank struck a deal to share the losses on $484.3 million of First Commercial's assets, with the FDIC's cost estimated at $78 million.

The rate of collapse is expected to moderate this year, but predicting the failure rate of the nation's lenders is an inexact science, according to FDIC spokesman Greg Hernandez. “We look to see fewer bank failures than in 2010,” he asserts, but adds that “it's too early. You don't know how it's going to shape up.”

He points out that for the most part, the failures occurred among smaller banks, although several behemoths have fallen. More than two-thirds of the institutions that failed in 2010 were community banks with assets of $1 billion or less.

In 2008, as credit markets froze, large banks suffered residential loan losses after the housing market soured. But in 2009 and 2010, community banks took the hit as many commercial property owners tried in vain to refinance maturing loans, while new projects stalled and developers could not repay construction loans.

In 2009, the assets of failed banks totaled $169.7 billion, according to the FDIC, and in 2010, $92 billion. Although a greater number of banks failed last year, some institutions that collapsed in 2009 had significantly larger loan portfolios.

This year, banks still face strong headwinds. The number of institutions on the FDIC's “Problem List” rose from 829 to 860 in late September 2010, the highest number in 18 years, according to the FDIC's third-quarter 2010 banking profile. The assets of problem institutions dropped to $379.2 billion in the third quarter from $403.2 billion in the second quarter.

Still, the larger picture is encouraging. Banks' year-over-year earnings improved for the fifth consecutive quarter in the third quarter of 2010, the FDIC reports. Quarterly net income for the 7,760 insured commercial banks and savings institutions added up to $14.5 billion — a huge increase over the $2 billion reported a year earlier.

However, net income for the third quarter fell below the $21.4 billion reported in the second quarter of 2010, a decline blamed on a $10.1 billion quarterly net loss at one large institution. Nearly two-thirds of financial institutions (63.3%) reported higher net income than a year earlier, and fewer than one in five (18.9%) were unprofitable. A year earlier, more than 27% of banks reported negative net income, according to the FDIC.

Total assets of the insured institutions increased by $163 billion (1.2%) in the third quarter. It was the first real growth in industry assets since the fourth quarter of 2008, the FDIC reports. Total loans and leases, however, fell by $6.8 billion (0.1%).

“I would divide banks between the major players that we all know, the Wells Fargos of the world down to U.S. Bank, and everyone else. Clearly the major players have been able to hold onto their assets through the downturn,” observes Ed Padilla, CEO of Bloomington, Minn.-based mortgage banking giant NorthMarq Capital. “I would say [big] banks are quite healthy.”

And they have been highly profitable, he adds. “There hasn't been the big commercial real estate collapse that we feared,” says Padilla. In 2008, even within the lending community the nation's financial foundation appeared fragile. “We were all concerned that this maturity cycle was just going to wipe out commercial real estate and be a disaster for everybody. And largely, that has not happened. The special servicers haven't had a fire sale on their defaulted $80 billion in loans. The banks have not been blowing out — with the exception that a lot of small banks have failed.”

But the strain didn't stop with small banks. Some regional institutions failed, too. The banks that collapsed made fatal decisions, particularly in issuing loans that strayed from the core of commercial real estate. They underwrote loans for bowling alleys, for instance, rural golf courses and freestanding, owner-occupied metal buildings. “Even at the height of CMBS (commercial mortgage-backed securities), we weren't financing that type of property,” says Padilla.

What happens to the loans of failed banks after the FDIC is appointed receiver? The loans, even those that are nonperforming, become attractive targets for savvy bidders. But it's a complex process involving partnership with the FDIC.

For instance, in December, the FDIC sold a 40% equity interest in a newly-formed limited liability company created to hold assets from five failed bank receiverships. The unpaid principal balance was $137 million, and the winning bidder was a partnership of Colony Capital, based in Santa Monica, Calif., and the Cogsville Group LLC of New York.

The FDIC kept a 60% stake in the new company and will share in returns on the assets. Mainly located in Utah, those assets include 198 distressed commercial real estate loans, of which at least 38% are non-performing.

“We've been playing in the FDIC space for some time,” says Paul Fuhrman, a principal at Colony Capital. “It's painstaking work.” His group spends endless hours on the phone managing the portfolios. “When we contact these borrowers, often times we find out they haven't heard from anybody in months or maybe a year. The bank failed, they couldn't get anybody on the phone. They want to do a loan modification, but nobody called them back. We talk to these borrowers and more often than not we can come to a resolution. We're not pushovers — we expect people to perform their obligations.”

It's a costly process. “Let's say the FDIC's got 500 loans that they're selling. Most of our competitors are probably spending half a million dollars to $1 million underwriting that portfolio,” says Fuhrman. “We probably only win one out of three, on average. That's about right. If you start winning every single one, you worry that you're paying too much. And if you're losing them, you're probably not being competitive.”

After banks tightened their purse strings during the credit crisis, and CMBS lending bit the dust, falling from $230 billion in 2007 to $11.6 billion in 2010, other lenders tried to fill the void, from life companies to private equity investors.

Mesa West Capital, a privately held first mortgage lender based in Los Angeles, closed about $500 million in loans in 2010, says Ryan Krauch, a principal with the firm. Mesa West, which specializes in non-recourse loans of at least $10 million, recently closed a $60 million loan involving the Four Seasons Hotel in Austin, Texas.

The hotel's cash flows had declined but they remained positive, he says, and it is a quality property in a good market.

“We did not do many transactions in 2009. Every quarter in 2010 got progressively better in terms of product quality available and transaction volume.” The signs of recovery are giving investors more confidence to transact “and not be overly concerned that another shoe is about to drop,” says Krauch.

Meanwhile, mortgage broker NorthMarq arranged loans. “We have almost $40 billion of commercial real estate servicing, but it's all other people's loans,” says Padilla. NorthMarq's loans normally range from $5 million to $25 million, although some are for $100 million. Many loans come from life insurance companies. NorthMarq recently arranged financing that included a $3 million first mortgage for the Montecito Inn in the Santa Barbara, Calif., $4.3 million for Singleton Shopping Center in Bethpage, N.Y., and $3.3 million for Village Crossing Shopping Center in Sedona, Ariz.

Today, banks also are increasing their lending. Third-quarter loan originations were 32% higher than in the third quarter of 2009, says Jamie Woodwell, vice president in the research and economics group at the Mortgage Bankers Association (MBA).

Accounts of unavailability of credit across the commercial banking sector over the past few years may be exaggerated, says Woodwell. “When you look at banks, and particularly in relation to commercial and multifamily mortgages on existing property, there's this belief, I think, that there was a major pullback in the amount of credit available. And when one looks at the FDIC's numbers on the holdings of banks and thrifts, that isn't borne out.”

From the end of 2007 to the end of the third quarter of 2010, commercial and multifamily mortgage debt held by FDIC-insured banks with less than $1 billion in assets increased 7.2%, says Woodwell. Meanwhile, total loans and leases over that period declined by 7.4%.

“We've seen a pullback in construction lending across the board,” however, says Woodwell. “Banks have had very high delinquency rates and high charge-off rates on construction loans.” In part, the delinquencies are related to declines in property values. According to the Moody's/REAL Commercial Property Price Indices, prices have dropped 41.9% since the peak in October 2007.

The nation's banks have weathered rough seas, says FDIC's Hernandez, but the worst may be over. “They're showing resilient revenues and improving asset quality,” he notes. “It's a slow process in the banking sector, but things are improving.”