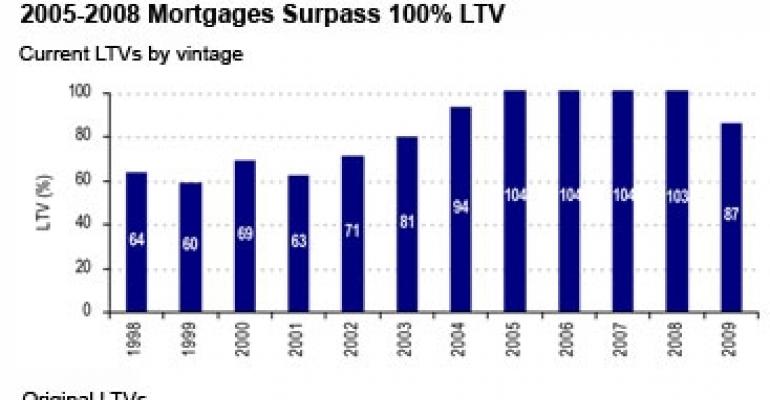 As billions of dollars in commercial debt comes due over the next two years, with many loans originated from 2005 to 2008 underwater, the need for capital will skyrocket. Of the $3.5 trillion in commercial mortgage debt outstanding, more than $1.1 trillion is needed to service that debt. That’s according to a new 2010 forecast from New York-based financial analyst Keefe, Bruyette & Woods (KBW).

The scarcity of cash will be most acutely felt in the banking sector, which holds some 80% of the approximately $500 billion in commercial debt that will mature through 2011.

“We believe that the behavior of the banks will be driven primarily by their borrowers’ lack of ability to refinance their mortgages in the current environment,” stated KBW analysts in the report. “It would be in the banks’ interest to provide extensions to their borrowers as long as cash flows remain adequate to service their loans.”

Delinquency rates on commercial bank real estate loans reached 7.91% through the second quarter while charge-off rates hit about 2.25% at the end of the fourth quarter of 2008, the most recent data available from the Federal Reserve. Meanwhile, delinquency rates for loans in CMBS have spiked to 5% on average and charge-offs were very low at 0.04% at the end of last year. KBW expects delinquencies for both bank and CMBS loans to increase “materially” as maturities hit.

On the CMBS front, loans originated in the 2005 to 2008 time frame are severely underwater, with average loan-to-values (LTV) of about 104%. That compares with LTVs that ranged from 62% to 72% when these mortgages were first originated.

“We expect the CMBS maturities to result in much higher levels of maturity defaults relative to bank commercial real estate portfolios because even if securitization restarts in a reasonable time frame, high LTV borrowers will not be given the flexibility that they would be given through banks,” say KBW analysts.

In addition, given tighter underwriting standards, LTV limits for borrowers are currently around 65%. Companies that are still offering mezzanine loans are doing so primarily on first mortgages with LTVs of 50%, and restricting the total amount outstanding to 65%. That pales in comparison to financing of the boom years when borrowers could pile on debt well above 80% because of the widespread availability of mezzanine debt.

There is a silver lining to the commercial mortgage sector, however, moving into 2010. Since November and early December, two new CMBS deals have been completed and another is in the market. The deals involve Developers Diversified, Florida East Coast Industries and Inland Western.

Goldman Sachs led the DDR deal, which was priced in mid-November. According to market participants, say analysts, of the $320 million of AAA securities 50% to 75% were purchased by all-cash buyers who did not require TALF financing.

The $460 million Florida East Coast Industries deal led by Bank of America and priced in early December was not issued under the TALF program. The deal is backed by mortgages on office and industrial properties in Florida. Finally, the $625 million Inland Western deal, backed by retail properties of the Inland Western Real Estate Trust, is oversubscribed in the top two AAA-rated portions and the deal’s top-rated bonds are being marketed at yields that are 150 basis points to 220 basis points over swaps.

“We expect more CMBS activity in 2010,” say KBW analysts. “We believe it is likely that the CMBS market will continue to broaden and could allow transactions with higher leverage in the future.”