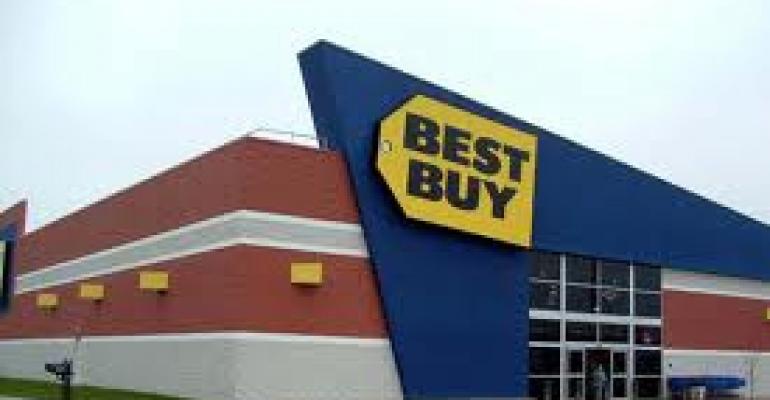 Two years later, the Minneapolis-based retailer is aiming to reduce its roughly 42 million sq. ft. big-box footprint in the U.S. by 10% over the next three to five years. Stretched consumers and competition from discounters and Internet rivals have contributed to weak sales.

The consolidation could save the company some $70 million to $80 million a year. Best Buy is considering subleasing space in existing stores as one way to achieve the reduction.

Best Buy’s comparable store sales dropped 1.7% in the first fiscal quarter that ended May 28 on a year-over-year basis after growing 2.8% during the same period in 2010.

But Best Buy’s challenges are hardly surprising. Retailers competing in the technology age are discovering that any notion of predictable, long-term growth is as obsolete as the buggy whip. That’s especially true for peddlers of what have largely become commodities: music, movies, books — and now — electronics.

In recent months, the introduction of mobile tablets and e-readers hastened the path to bankruptcy for Borders Group. The Ann Arbor, Mich.-based bookseller, which already was battling competitors such as Amazon.com, has closed more than 200 underperforming stores out of its total store count of 642 since filing for bankruptcy in February.

The organization is a research and consulting affiliate of CW Financial Services, which provides debt, special servicing, investment management and other services to the commercial real estate industry.

High gas prices not only eat into a bigger portion of a family’s budget, but also make consumers reluctant to drive to a store to buy mass-produced goods when they can get them online, says Muoio.

“Technology is changing so rapidly that retailers can get caught in cross currents,” says Muoio. “Increasingly, electronics are becoming commoditized because people can get a lot of information on a product and then have the instant capability to shop around.”

Adds Muoio: “I can just as easily order my Samsung high-definition TV from an online source and have it delivered to my house, so why do I need to go to Best Buy or its equivalent?”

Cambridge, Mass.-based Forrester Research predicts that online sales will grow at an average annual clip of 10% over the next five years to about $279 billion by 2015.

Best Buy hasn’t been blind to the Internet’s influence. In addition to paring back square footage in its big-box stores, the company aims to double online revenues to $4 billion over the next three to five years.

For landlords, Best Buy is just the latest retailer struggling to compete against technological advances that have turned music stores, video stores and bookstores into relics.

By focusing on necessity-based retailers, the non-traded real estate investment trust has limited exposure to the book, music and electronic concepts threatened by online retailing, according to the company.

The landlord holds special events at its properties and encourages tenants to provide the type of customer service that sets them apart from online retailers. It also regularly mails out 40,000 promotional pieces, adds Denard.

“On every single piece of mail is a component that reminds consumers to shop local because it keeps needed tax dollars in the community,” says Denard. “At the end of the day, we are human beings and we like to interact with each other.”