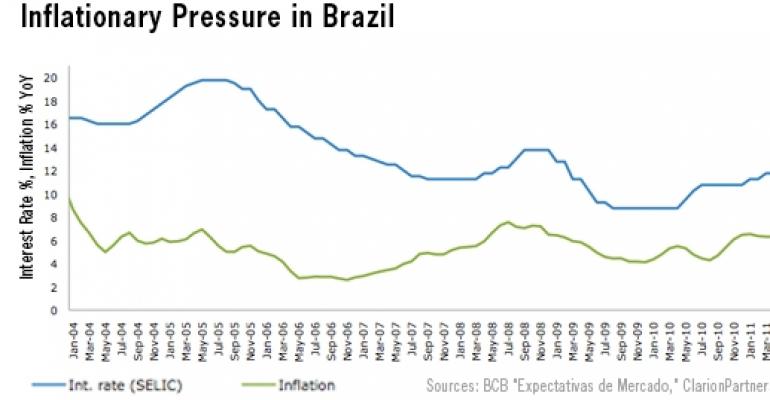 Beyond Fun and Games: Why Investing in Brazil Is a Smart Move

Brazil’s strong demographic and macroeconomic fundamentals help explain why the long-term outlook for the country is so positive. Another selling point is that Rio de Janeiro is the site of the 2016 summer Olympics.

Brazil has an uneven wealth and population distribution. The southern part of the country accounts for the majority of the population and is the biggest contributor to gross domestic product. That region also contains the largest cities and the main economic and real estate hubs.

Even in the short term, Brazil shows strong potential. After a strong 2010, economic growth in 2011 is forecast to grow at an annual rate of 4.1%. Economic growth rates for the next three years are forecast to surpass the long-term average, supported by tight labor markets and rising consumption and investment.

The accelerating economic growth rate has brought new concerns about an overheating economy and inflation risks. As of July 2011, according to ING Financial Markets, inflation for the prior 12 months reached 6.7% (higher than the Brazil Central Bank target of 6.5%). What’s more, the forecast for inflation has risen to 6.2% for 2011.

However, month-on-month figures have been decelerating since January 2011. The deceleration was especially strong in May and June, partly due to the lagged effect of interest rate hikes.

The recent softening and the quick response by the Central Bank — which has raised the policy rate five times this year as of August 2011 — point to an ongoing deceleration of inflation rates. Forecasts actually show softening inflation rates beginning in 2012.

One principal force running against an inflation slowdown right now is the labor market, which is both leading to increased production costs as well as producing strong demand for goods.

On the one hand, the Brazilian labor market is extremely unionized and future demands for wage increases are expected, which would increase production costs. On the other hand, the market is close to full employment, which fuels credit growth and consumption creating inflation pressures.

Real estate markets have generally been following the economic performance of the country. They experienced a drastic slowdown in 2009 and partially recovered in 2010.

The industrial sector continues to be characterized by old, outdated stock dominated by owner-occupiers, but certain areas of São Paulo and Rio de Janeiro are modernizing at a fast pace.

We expect domestic demand to remain strong, which is likely to boost demand for industrial real estate in the short term in the major population and distribution hubs of the country.

In São Paulo, total absorption recovered strongly in 2010 and slowed down in the first quarter of 2011, but Class-A net absorption remained the best performer, according to CB Richard Ellis.

This is evidence of a “flight to quality” and the strong demand for quality properties in Brazil. In the medium term, the Brazilian national growth acceleration program is supposed to develop R$104.5 billion in logistic infrastructure throughout the country from 2011-2014.

The Olympics in 2016 are expected to attract at least R$8 billion in transport infrastructure, which may create new attractive locations for industrial infrastructure.

The homebuilding industry continues to boom, and demand continues to outstrip supply. The housing deficit of the country remains and is not expected to be resolved in the next decade.

Despite this fast growth, the housing deficit, the expanding middle class and the relatively small size of the mortgage market suggest demand is strong and has room to grow and avoid a bust in the residential market. Still, growth rates are expected to decrease.

Property sectors at a glance

Retail fundamentals remain strong for the long term, supported by the positive demographic and economic fundamentals. In the short term, retail sales have been strong in the first months of the year and are expected to grow, according to the Brazilian Association of Shopping Centers.

While retail sales at shopping centers account for less than 20% of the total volume of retail sales in Brazil and the client base comes mainly from Class-A and B tenants, there is potential to grow. However, the retail sector appears to be the most penetrated by institutional investors, and yields are the lowest among the commercial property types.

The office sector weathered the crisis better than expected and recovered in 2010, with 25% rental growth and rapid cap rate compression. São Paulo, the most internationally driven market in Brazil, experienced a relatively subdued demand and a large number of new projects, which drove vacancy rates up.

Rio de Janeiro’s office market, which is driven by local demand and is highly constrained, saw prime rents peak at all-time highs. We believe the tightness of the market will likely support rents in the short to medium term, especially with the increased activity due to the economic recovery.

Large deliveries and the high rent levels and growth rates observed suggest that once the economy slows down and the sports events are finished, the market fundamentals could soften in Rio de Janeiro.