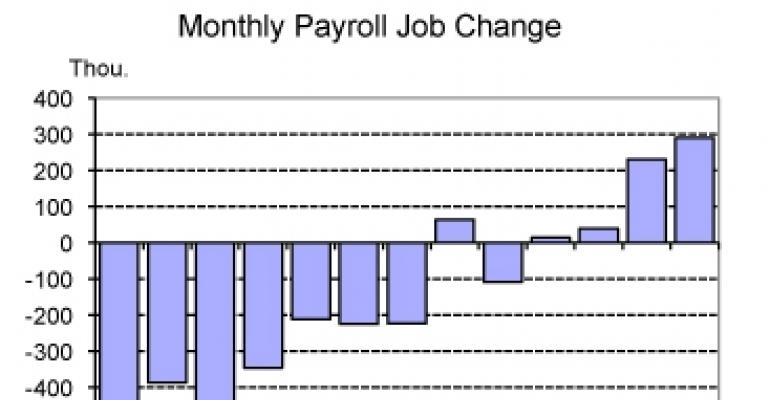 Lost in a tumultuous week in which the Dow Jones Industrial Average plunged 5.7% and rioting erupted in Greece over federal budget cuts and tax hikes in that debt-ridden nation was a monthly U.S. jobs report that easily beat expectations.

The U.S. Bureau of Labor Statistics reported Friday that nonfarm payroll employment rose by 290,000 in April, much higher than the consensus estimate of 175,000. Substantial employment gains occurred in manufacturing (44,000), professional and business services (80,000), health care (20,000), and leisure and hospitality (45,000).

Since December, nonfarm payroll employment has expanded by 573,000, with 483,000 jobs created in the private sector. The vast majority of job growth occurred during the last two months.

“The drama playing out in Europe eclipsed this blowout report from the Bureau of Labor Statistics that employers added 290,000 net new payroll jobs last month, including 231,000 in the private sector,” says Bob Bach, chief economist for Santa Ana, Calif.-based Grubb & Ellis. “ It was the best performance since February 2006.”

High drama across the pond

On any other day, this positive jobs report would likely have fueled a big stock market rally, but instead the Dow fell 140 points on Friday due largely to concerns over whether the debt crisis in Greece would spread to other European nations. (The European Union this past weekend agreed to a $955 billion bailout plan in an effort to prevent the sovereign debt crisis in Greece from spreading.)

Although the financial markets remain fragile as the problems in Greece and the euro zone illustrate, Bach believes that those problems don’t necessarily prevent the economic recovery from continuing.

“It’s not unusual for financial markets to disconnect from economic fundamentals for periods of time,” explains Bach. “Consider the 23 percent plunge in the Dow on October 19, 1987 (Black Monday). The economy continued to expand, and employers continued to add jobs at a rapid pace for another 2 ½ years, by which time the stock market had recovered its losses.”

But the financial crisis in Greece is a cautionary tale, according to Bach. The International Monetary Fund estimates that Greece’s debt load will grow from 133% of gross domestic product (GDP) this year to 149% in 2013. The GDP of Greece was estimated at $339.2 billion in 2009.

In contrast, the United States has a national debt of approximately $8.2 trillion, or about 57% of its annual GDP of $14.45 trillion. “Eventually the U.S. must get its own fiscal house in order,” says Bach. He urges investors not to abandon their “analytical rigor” as they compete for bargains in commercial real estate and other assets.

Victor Calanog, director of research for New York-based Reis, says that the April jobs report reflects what he’s seeing occur in the trenches. For example, monthly effective rents across the U.S. apartment industry rose 0.3% in the first quarter of this year, the first increase since the third quarter of 2008.

If the private sector continues to add jobs at the current pace, there will be less of a drop-off in employment growth once the temporary, part-time jobs for the 2010 Census are eliminated in the latter part of the year, according to Calanog.

“Overall, as the manufacturing sector recovers this should benefit industrial properties first,” says Calanog. “My hope is that the service sector surprises us with more job gains than expected over the next few months because that is what will really spur activity in office and retail leasing.”

The most encouraging aspect to April’s employment report was the upward revisions to the total number of jobs created in February and March, points out Hessam Nadji, managing director of research services for Marcus & Millichap Real Estate Investment Services based in Encino, Calif.

“We saw more strength in apartment absorption during the first quarter than expected, and we suspected that it could be a sign that employment is improving faster than the initial numbers suggested,” says Nadji. “And that turned out to be correct.”

Indeed, some 20,424 apartment units were absorbed in the first quarter of 2010, according to Reis, the strongest level of absorption in any first-quarter period over the last 10 years.

Another encouraging sign on the employment front is that the share of industries adding jobs expanded from 48% in March to 64% in April, an undisputable sign that growth is broadening, says Nadji.

“The strength in manufacturing indicates that the recovery in exports and the rebound in domestic demand — particularly in the auto sector — are on track,” Nadji adds. “In general this report reiterates our forecast for job growth of about 1% this year, which is still well below previous first-year recovery periods.”

Nadji expects that office and industrial vacancies will keep rising until the third quarter of this year and then stabilize, but not recede until 2011.

What is Nadji’s outlook for the U.S. shopping center industry? “Retail will continue to lag due to the pressures on local and smaller retailers, oversupply, and an unlikely sustenance of the pace of retail sales recovery.”