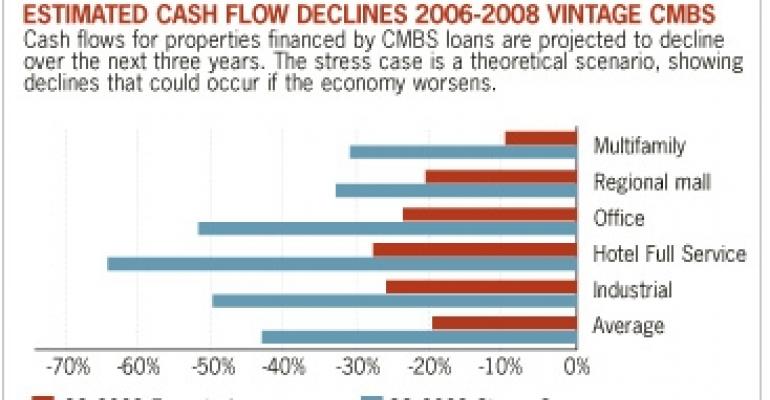 Despite commercial property value declines of 42.9% from peak 2007 levels, the news is about to get even worse for owners, according to Moody’s Investors Service. In the coming months, Moody’s expects values to fall by as much as 55% from the peak before rebounding.

“That’s likely to happen, in our view,” says Nick Levidy, managing director of New York-based Moody’s Investors Service and co-author of a newly released report on the outlook for commercial real estate and commercial mortgage-backed securities (CMBS). “We don’t think [property values] are going to stay down by 50% for a long time,” says Levidy.

If that’s the case, investors may finally rush in to buy properties that have taken a long slide to the bottom. Class-A office properties, for instance, are now valued at a discount to replacement cost. The discount presents an alluring opportunity to buy, although scarce financing has hampered would-be investors.

After hitting bottom, property values are expected to bounce back, but not as high as 2007 levels. More likely, the values will settle at 30% to 40% below the market high as the economy rights itself and investors reenter the marketplace.

Cash flows for commercial real estate of all property types have been depressed by about 10% from their high point in early 2008. Cash flows will continue to decline over the next several quarters (see chart), Moody’s analysts project.

Where is the bottom?

Investors have been pressing for answers on when values will finally hit bottom before starting their recovery. Many are looking for that narrow window through which they can climb to pick off bargains before prices begin to rise again.

With regard to cash flows, however, reaching bottom depends on a number of factors. “Job losses figure in,” says Levidy. “It’s going to depend on the property type involved.”

The performance of office properties, for instance, is related to employment levels of professions that use offices. Retail cash flows, meanwhile, are rooted in consumer spending and are affected by stagnant wage growth.

In general, cash flows for properties with short-term leases, such as hotels and multifamily properties, are expected to bottom out in 2010 or early 2011, while the bottom for office, retail and industrial real estate could take years to reach.

“We expect cash flows to fall 20% peak to trough,” says Connie Petruzziello, an analyst at Moody’s and a contributor to the special report on the outlook for commercial real estate and CMBS.

Across all property types, the average expected decline over the next three years in cash flows for CMBS deals worsened from 17.2% in the first quarter to 19.6% in the third quarter.

Moody’s divides cash-flow projections into “expected case” and “stress case” scenarios. “In a stress case, we assume much steeper declines and higher cap rate increases, which gets us to the higher value declines,” says Petruzziello.

On the other hand, the expected case takes existing stress levels into account, along with factors such as rising cap rates and declining property values. The ratings agency used data from the third quarter to analyze 2006-2008 vintage CMBS deals.

If the nation’s economy continues on the same path with U.S. Treasury interest rates and other indicators growing at an expected pace, the effect on cash flows will follow the expected case. “If we see further deterioration and further stresses — adding on many more layers of stress than we’re currently seeing” cash flows would plunge, according to Petruzziello.

For example, under the stress scenario, Moody’s projects that cash flows for full-service hotels would dive 64.6% peak to trough, while cash flows for office properties would drop 51.8%.

For now, there is no indication that cash flows will decline precipitously. But some property types have experienced cash flow declines since the first quarter. For instance, first quarter CMBS data showed that office property cash flows would decline 20.4% peak to trough, but by the third quarter the forecast turned to a steeper 23.5% decline.

“As leases are expiring, [tenants] are not renewing them as quickly. They’re not renewing for quite as much space,” explains Petruzziello. Office demand is expected to further weaken next year as unemployment continues to rise. But office rents and vacancy rates are expected to stabilize by 2011 before showing improvement.

With regard to retail properties, Moody’s does not expect consumer spending to return to pre-recession levels until employment and wage growth resume and consumer confidence is restored. That may not happen until 2011 or later, the company warns. If consumers start saving more than they have in recent years, the retail recovery could take longer.

For the 2009 holiday season, forecasts vary from a year-over-year decline of 1% to an increase of 1.8%, according to Moody’s outlook.

But there are bright spots for hospitality. Budget hotels have outperformed luxury properties, and small town properties have “trounced” resort hotels, the ratings company says.