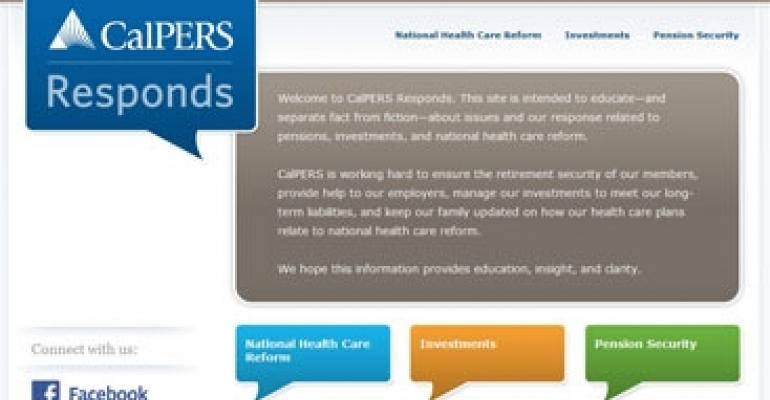 CalPERS Goes On the Offensive to Combat ‘Misinformation’

In a radical departure from its media-shy nature, the nation’s largest pension fund is launching a new online campaign to help counteract an avalanche of challenges in recent months.

The California Public Employees’ Retirement System (CalPERS) is often viewed as the bellwether of institutional investors, with some $200 billion in total assets under management.
But steep losses over the past year have put the fund under a microscope. The value of CalPERS’ commercial real estate portfolio, for example, fell 35.8% to $13.6 billion over the 12-month period that ended on June 30.

Now its new website, CalPERSResponds.com, is part of a strategy to rebut some of the criticisms hurled at the pension fund over the past year. The fund also has beefed up its social media presence on Twitter, Facebook and YouTube.

“There’s a lot of information and misinformation about CalPERS,” says Patricia Macht, director of external affairs for CalPERs, the largest public pension fund in the U.S. “We hope this site will help separate facts from fiction and provide some education, insight and clarity to these issues.”

The website also includes video interviews with top CalPERS executives. In one recent Q&A session, CalPERS Chief Investment Officer Joe Dear opined on the recovery of the investment portfolio and the importance of reform in the financial markets. “We’ve moved up from the bottom in March 2009. At about $160 billion to just above $200 billion, which is a $40 billion improvement in the portfolio,” remarked Dear.

To be sure, CalPERS could use some help in the public relations department, as its many travails have been much more public than the traditionally publicity shy fund would have liked.

Earlier this year, CalPERS initiated a sweeping review of its private equity managers, including its largest long-time adviser, Apollo Global Management, which oversees $4 billion in investments. CalPERS has a significant relationship with Apollo, having purchased a 9% stake in the firm in 2007.

According to Macht, the goal is to change the way most private equity firms charge their pension fund clients, with fees based on actual investment performance rather than flat rates.

As the investment markets return to some semblance of health, institutional investors such as CalPERS are being pressured by pensioners to take a more active role in how the fund’s dollars are spent and how its partners operate. That’s particularly true of commercial real estate investments.

“When the large institutional investors come back into the market, they are going to rewrite the rules of the game [on fees], and it will not be to the benefit of the private equity managers,” says Ted Leary, president of Los Angeles consulting firm Crosswater Realty Advisors.

In early October, the CalPERS board of directors ordered a review of payments totaling $53 million made by Apollo and two other private equity firms to ARVKO Financial Ventures, a company run by former CalPERS board member Al Villalobos.

Often money managers pay fees to middlemen, or placement agents such as ARVKO, to help secure funding from institutional investors such as CalPERS. No wrongdoing has been charged, but the investigation is still underway.

And in late October longtime real estate adviser MacFarlane Partners, run by chairman and CEO Victor MacFarlane, resigned from its role in managing some $1.2 billion in real estate assets on behalf of two funds run by CalPERS. The move comes after a $970 million land deal involving CalPERS’ money and arranged by MacFarlane went bust in 2008.

Compounding the wave of bad news was a lack of clarity in the C-suite. In the first few months of 2008, two top executives at CalPERS defected, including senior investment officer Christianna Wood and chief investment officer Russell Read. Fred Buenrostro also retired as CEO.

Read’s departure was particularly bittersweet. Although he served as CIO for less than two years, he had quickly and dramatically shifted the fund’s investment strategy to riskier stakes in private equity firms, foreign stocks, Asian real estate and commodities.

Now Reed’s successor is reassuring pensioners that their money is in good hands. “Retirees need to know that the security of their benefit checks is without question,” notes Dear in his online interview.

“Our assets are more than sufficient to make those payments, and we’re positioned for long-term growth,” continued Dear. “Our ability to earn 7.75% [CalPERS’ historical return on investments] over the long term is without question going to be done.”