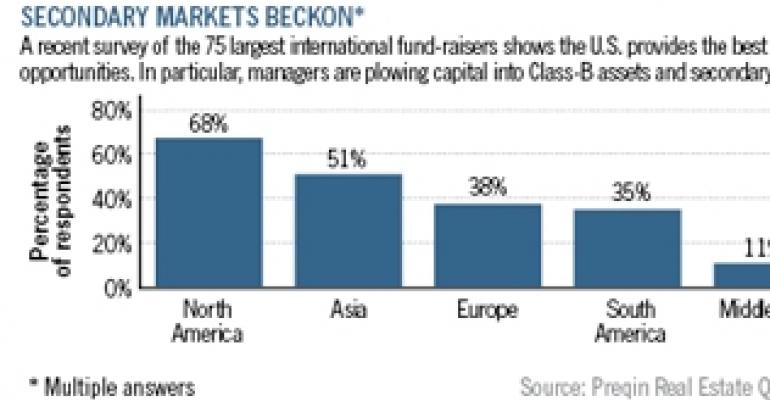 There is fierce competition among institutional investors for minority ownership in trophy properties in primary markets such as New York, London and Washington, D.C. Flush with stockpiles of cash from recent fund-raising activities, fund managers and their private equity partners are lining up to force the hand of owners still reeling from the financial crisis.

These opportunistic buyers are taking advantage of lower property values and are willing to play hardball with each other to gain access to glamorous assets.

Most high-yield investors who consider themselves asset resolution specialists now embrace such a strategy. They have turned their sights on banks that might be forced to begin selling commercial real estate loan portfolios at discounts to clean up their balance sheets.

But while the media reports sensational stories about institutional players fighting over stakes in assets such as the GM Building, 666 Fifth Avenue, the John Hancock Tower and the Peter Cooper Village/Stuyvesant Town project, Class-B properties and secondary markets are capturing the hearts and minds of another breed of investors.

For example, STAG Industrial Inc. a new publicly traded REIT that just raised $205 million from a stock offering, is targeting single-tenant, Class-B properties in secondary markets across the U.S. The firm quickly ramped up with 11 properties in Indiana, 11 in Ohio, nine in North Carolina, and eight in Michigan.

STAG is shooting for high returns by foregoing the high-end properties in top-tier markets, and sticking to its niche — secondary markets with less occupancy and rent volatility.

But the company’s top tenants by revenue still include big names such as International Paper, Bank of America, ConAgra Foods and Chrysler.

Like STAG, Simon appears satisfied with a risk-averse investment strategy of seeking stable sales and occupancy in a less glamorous secondary market asset.

Although all eyes are on the CMBS stage where new issues are on pace to triple last year’s volume, many observers are raising red flags about lax underwriting standards and insufficient returns for high-risk, or B-piece, investors.

Citigroup and Goldman Sachs Group temporarily pulled back a $1.5 billion CMBS offering after Standard & Poor’s refused to rate the notes. S&P says that a discrepancy in how security grades were calculated and assigned to the transaction caused it to balk at the transaction.

In another CMBS sideshow, B-piece investors were reportedly very dissatisfied with yields they received on a $3 billion transaction just a week prior to the Citigroup/Goldman offering.

Despite record-low yields on U.S. Treasury bonds, all this drama is causing CMBS yields to rise amid investor demand for higher returns.

Transactions in Class-B and secondary markets appear to be on the rise as the investment assets of choice. While there will always be a place for the rescue of high-profile asset in commercial real estate — like developer Jared Kushner’s recent deal with LNR Property Corp. to rescue Kushner’s struggling 666 Fifth Ave. — less glitzy properties will likely determine the certainty of the recovery.

Kushner paid a record $1.8 billion for the Midtown Manhattan office tower that is plagued by heavy debt. LNR wants to buy just a piece of the trophy asset.

But for now, many investors are opting to skip the high-profile assets, looking instead to smaller properties in secondary and tertiary markets for higher returns.