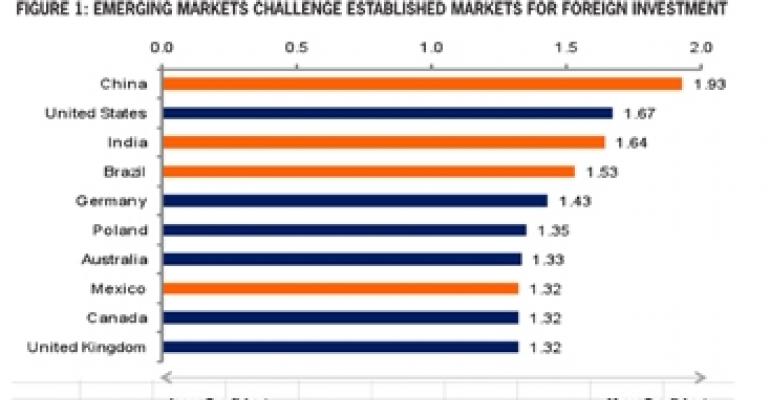 Commentary: Emerging Markets Exit the Recession with Confidence and Credibility

Large, rapidly developing countries, including Mexico, China, India and Brazil, are all expected to benefit from increasing international investment as the global economy recovers. While previous recessions often left developing nations grasping for financial stability, these four countries are poised to exit the Great Recession with increased economic confidence and credibility.

Emerging market economies, especially China and India, continue to lead the global recovery. In China, GDP growth was 11.9% and 10.3% during the first two quarters on an annualized basis, far exceeding the growth rate in the developed countries such as the U.S., Japan, UK, and the Euro Zone.

The Chinese manufacturing sector continues to expand after the slowdown. August imports and exports surged to new records, expanding by 34.4% and 35.2%, respectively. However, the country’s property bubble could pose a threat to the financial and social stability.

India's economy bounced back strongly as a surge in industrial activity and robust services growth helped it regain the rapid expansion pace it kept before the global economic slowdown. Its GDP growth is on track to rise by more than 8.5% in 2010. Heavy demand for automobiles, strong services growth and healthy exports of textiles and jewelry were among the drivers.

Brazil, Latin America’s largest economy, recorded 8.8% growth in the second quarter of 2010 compared with the same period a year ago. In addition to strong exports of commodities to China, Brazilian economic expansion can also be attributed to growth in the industrial sector (13.8%), agriculture (11.4%), and the services industry (5.6%). Over the past 18 months, inflation and the currency (the Real), which had been problematic in past economic downturns, have been relatively stable.

External demand — mainly from the United States — continues to drive Mexico’s economic recovery, while the domestic market has shown gradual but steady improvement. Mexico’s GDP expanded at an annualized rate of 7.7% in the second quarter.

While a slowdown is expected in the second half of the year, economics and business research firm the Economist Intelligence Unit is forecasting a 4.7% growth rate for the year, well above the U.S. and Euro Zone figures, and 200 basis points higher than Mexico’s average growth rate over the past 20 years.

In October, Mexico became the first Latin American country to be included in Citigroup’s World Government Bond Index. Foreign investment in peso bonds had spiked in anticipation of the listing, exceeding $10 billion over the past 11 months, according to a recent Reuters report.

President Felipe Calderón’s efforts to keep the fiscal deficit moderate and balance the budget by 2012 are helping. Rating agencies have reaffirmed their faith in the country, with Moody’s Investors Service saying recently that a downgrade was highly unlikely.

Nonetheless, political risks present one notable potential challenge to increased investment in Mexico, as drug-related violence has expanded beyond the border zone and captures headlines in the U.S. and beyond.

All four of those nations are expected to see a sharp increase in foreign direct investment (FDI) in coming years. According to A.T. Kearney’s 2010 FDI Confidence Index, a survey of global business executives, China remained as the top-ranked nation, while India fell from second to third, behind the U.S. Brazil moved up from the sixth position to fourth. Mexico has returned to a Top 10 position as one of the most attractive countries for FDI [Figure 1].

Mexico ranked 8th worldwide this year in terms of investment attractiveness, up from 19th at the end of 2007. The improvement was largely driven by U.S. companies seeking low-cost production opportunities closer to home. Mexico ranked 5th among North American investors, behind only the U.S., China, India and Brazil. It was ranked 10th in 2007.

Previous recessions have often damaged the reputation of emerging market countries, generally based on some combination of runaway inflation, excessive borrowing, or political upheaval. The experience in the Great Recession has been different, however. Many emerging market countries have enhanced their credibility through this downturn, with sovereign-risk spreads lower in many of the biggest emerging markets than in troubled European nations.

While spreads increased sharply in the wake of the Lehman Brothers bankruptcy in late 2008, they never widened to the same level as during previous international economic crises. Current rates are only marginally above the pre-recession period and are well below the long-term average since 1997.

The combination of strong demographic and economic growth in these larger developing markets has generated significant interest in their real estate markets as well. All benefit from large, growing and relatively young populations, increasing urbanization, and an emerging middle class.

Combined with high levels of economic growth, this should result in a large aggregation of wealth, creating ever more attractive world markets. While real estate development in China has been occurring at a breathtaking pace, the overall supply of high-quality buildings in these nations remains well below expectations of future demand.

Increasing global economic integration makes the opportunities in international real estate investment more compelling than ever before — especially given weakness and slow growth in the domestic real estate markets of most developed economies.

Most capital currently going into real estate investment in these countries has an “opportunistic” risk/reward structure, but we expect that over the next few years “value-added” and “core” strategies will become increasingly common.