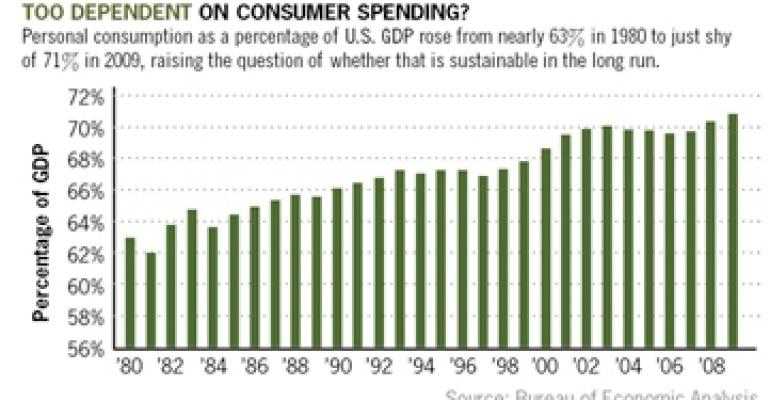 Commentary: The U.S. economy will struggle until we make sacrifices

The future of U.S. real estate will be greatly affected by how our nation deals with a flaw in the American electorate. Americans want to receive many benefits from their local, state and federal government — including benefits to real estate — but they are unwilling to pay the full costs of those benefits.

Many conservatives are rightly dismayed by our high deficits, but they are quite vague about what government services they are willing to reduce. Most liberal groups also aren't willing to cut back on any programs that benefit them.

The elderly want to maintain all their benefits from Social Security, Medicare, and Medicaid. American car owners want to keep their gas-guzzling cars and get better roads, but they oppose any increase in today's inadequate gas taxes.

American homeowners get more than twice as large a subsidy in tax savings than the federal government spends on all housing programs that benefit lower-income households combined. Also, homeowner tax benefits go mainly to high-income owners.

It would be fairer to use tax credits for homeowner benefits instead of deductions from taxable income. Then every owner would get the same benefit per dollar spent on interest. Currently the wealthiest owners get much bigger gains per dollar. Yet home builders, realtors, mortgage lenders, and banks oppose any changes in homeowner tax benefits.

In commercial markets, the federal government provides tax subsidies to developers who build affordable housing and road systems that attract home seekers into new suburban areas. However, these benefits have been greatly reduced by declines in government revenues.

Unfortunately, most political and business leaders are not willing to be frank with the public. I recently heard a panel of private sector housing experts discuss what our future federal housing policy should be. They all agreed we should have one, but no one would describe it for fear of antagonizing some group.

What should we do about this worsening situation? First, we should start telling the truth and demand that our political leaders do the same. Yet the truth is not always pleasing to hear.

Consider the reaction to President Barack Obama's deficit reduction panel, which proposed a detailed plan for cutting both budget deficits and the nation's total debt. Nearly every elected politician has objected to its findings because they impose costs on some programs that benefit politicians. No politician currently in office really wants to reduce our budget deficits and debt in the painful ways that would aid our long-term growth and prosperity.

In order to escape from our situation of ever-rising debt to pay for consuming more than we earn, most Americans will have to adjust to lower living standards than we got used to from the mid-1990s through 2007. We should not maintain consumer spending at 70% of gross domestic product, but go back to about 60% to 62%. That means spending more on investment and less on consumption, and changing our tax system to favor investment over consumption. This message isn't something most elected officials and voters want to hear.

Another truth we must face is that real estate is not going to recover from its weak condition for several more years. Housing is going to remain a drag on all property markets as long as unemployment and foreclosures remain high.

Loans on many commercial properties cannot be repaid without a large infusion of equity, which will not be easily forthcoming. Hence commercial foreclosures will increase substantially.

It is in the best interests of our industry to confront the basic problems facing not only real estate, but also the very nature of the American economy. That means facing up to many unpleasant and challenging truths we have been avoiding for a long time — especially living beyond our means by constantly borrowing from abroad.

Tony Downs is a senior fellow at the Brookings Institution in Washington, D.C. Contact him at [email protected].