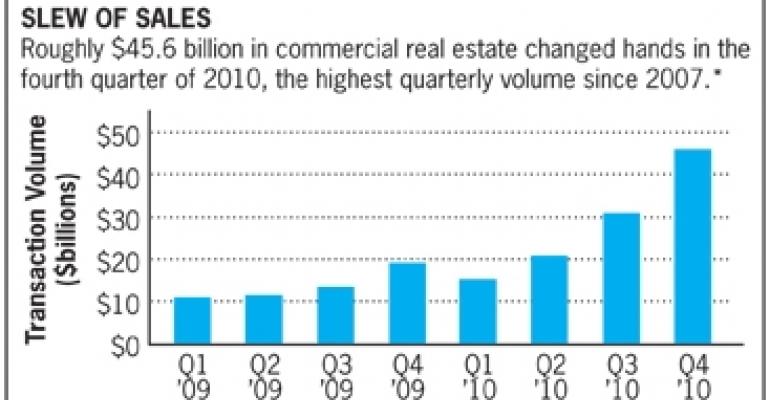 Blockbuster transaction volume in December helped to push U.S. commercial real estate sales to $115 billion for 2010, up 109% from $54.6 billion in 2009, according to preliminary results from Real Capital Analytics. December’s volume of more than $21 billion was the highest sum for a single month’s trading since the end of 2007.

“I think the recovery in transaction activity has snuck up on everyone,” says Dan Fasulo, managing director at Real Capital Analytics. The New York-based research company will publish its findings on December transactions later this month in its Capital Trends Monthly report.

While December’s volume is twice that of November, the surge is part of an ongoing recovery in investment sales that nudged monthly volume beyond the $10 billion mark last summer. Fourth-quarter sales of approximately $46 billion are comparable to quarterly sales volumes in 2004, notes Fasulo. “And 2004 is considered a healthy recovery year.” Real Capital Analytics tracks transactions of $5 million or more.

So far in this market recovery, commercial real estate sales have centered on core assets in primary markets. But with so many investors vying for the same properties, competitive bidding is driving up prices and reducing the annual yield available to buyers in those markets.

“There’s a tremendous amount of frustration from investors who just aren’t winning deals in the major markets, both on the equity and debt side,” says Fasulo. “It’s going to encourage some of those investors to venture out along the risk curve.”

Secondary markets, where competition for core assets has been less fierce, are among the next stops on that road to risk and higher yields. “The smart money is in secondary markets right now,” says Fasulo.

“Yield fatigue” is how some investors describe their growing frustration over rising prices in the primary markets, according to Robert Bach, chief economist for national real estate brokerage services firm Grubb & Ellis.

In order to win deals, those investors have had to accept lower and lower yields on new acquisitions in the past year. That has made many investors more amenable to the idea of buying outside the primary markets and could boost sales in secondary metros this year.

“With the economy getting a little bit better and the prospects better for 2011, investors seem more willing to reach for yield, particularly since yields have been so low for core properties,” says Bach.

Bach is quick to point out that only the apartment market has made a clear shift into recovery mode. Apartment absorption has been positive since the beginning of 2010. The apartment vacancy rate was 7.1% in the third quarter of 2010, down from 8% at its peak in the fourth quarter of 2009, according to New York-based Reis.

For the other commercial property types, fundamentals appear to have ceased their decline but improvements to date have been slight, says Bach. The national vacancy rate for office space was 17.8% at the end of 2010, for example, down just 10 basis points from the 17.9% peak it reached in the second quarter of that year.

The recent run-up in transaction volume suggests that buyers are looking beyond current fundamentals to an economic recovery and better demand down the road.

“Investors are beginning to anticipate a recovery in the leasing markets,” says Bach. “It’s encouraging that we’re heading in the right direction. The pickup seems to be real.”

Signs to watch for

As transaction volume increases in secondary markets in 2011, competition will begin to compress capitalization rates in those metros, according to Fasulo. And as investors show their willingness to buy assets in smaller markets, look for lenders to step up lending in those secondary and tertiary cities as well.

In fact, demand from investors seeking to place capital in commercial real estate through the recovering commercial mortgage-backed securities (CMBS) industry will necessitate lending in a wider range of markets, according to Tom Fink, managing director at analytics firm Trepp.

CMBS issuance is expected to reach between $30 billion and $40 billion, and issuers will only hit that target by reaching outside the core markets, he says.

“There is only so much investment you can place in New York and D.C.,” says Fink. “Ultimately CMBS will return to what it did best, which was to provide a lot of capital to a lot of markets across the country.”

A year ago, Real Capital Analytics forecast that U.S. transaction volume would reach $100 million in 2010. Today, Fasulo is making his own prediction that sales in 2011 will reach $230 billion, or double last year’s total. He bases that prophecy in part on favorable conditions in the current market, and in particular on the diverse assortment of investors eager to make acquisitions.

Early in a typical recovery cycle, he says, only one or two types of investors may be replete with capital to fuel transactions. This time around, however, there is a plethora of investor types with money to spend on commercial real estate, from real estate investment trusts to pension funds, foreign investors, private investors and corporations. That much interest can only bode well for sales volume, he says.

“I can certainly see transaction activity doubling again in 2011,” says Fasulo. “I see all the stars aligned on the equity and debt side to really ramp up activity in 2011.”