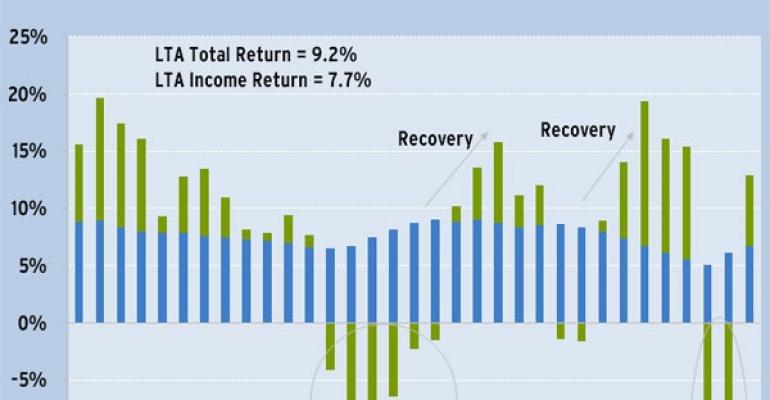 Over the past 12 months (as of the end of October), payroll employment has increased by an average of 125,000 jobs per month. However, the pace is not fast enough to lower the unemployment rate. As a result, we do not expect employment to return to its prior peak until 2016. Overall, employment growth appears to be strong in health care, high tech and energy, but is disappointing in finance, government and construction.

In almost all property sectors, occupancy rates are improving, concessions are declining and effective rents are rising in many markets. On the supply side, with vacancy rates relatively high, financing limited and rents below levels necessary to justify new construction, supply pipelines are well below long-term averages. The next three years should see a limited amount of new deliveries, which is a positive for further real estate recovery.

Among the four core property types, the apartment sector is leading the recovery. Rent growth is strong in virtually all multifamily markets, with half of the markets already exceeding prior peak rents. Demand for class-A apartments in major markets has been robust, prompting investors to look into value-added and secondary markets. Driven by favorable demographic trends, declining homeownership, a limited supply pipeline and attractive GSE financing, the apartment sector is expected to continue to perform well over the next few years.

The industrial sector has lagged in this recovery, but fundamentals are rapidly improving with five consecutive quarters of positive net absorption (a total of 131 million sq. ft.). National vacancy declined from 14.5 percent in 2008 to 13.7 percent as of the third quarter, according to CBRE-Econometric Advisors.

As business inventory, import/export volumes, consumer spending and manufacturing outputs recover, industrial real estate should offer attractive returns over the next several years. Large warehouses (400,000 sq. ft. and larger) have witnessed the greatest space demand to date, and build-to-suit opportunities are on the rise. Bulk demand is expected to pick up in 2012-2015 as global trade continues to expand and U.S. consumption recovers.

The office sector has experienced a faster than expected recovery with 2011 year-to-date rent growth of 2 percent. The top seven CBDs dominate with 36 percent of the total stock, but 77 percent of total absorption. In addition, 82 percent of CBD and 30 percent of suburban markets are showing positive rent growth, while state and local government markets remain weak in general. With muted supply, a strong office recovery is expected in 2013-2015. Major CBDs, which have benefited disproportionally from the government bailouts and the rebound of the high-tech and energy industries, are expected to recover more quickly than most suburban office markets.

American consumers have emerged from the recession better than expected. Solid consumer spending has been a key part of the economic recovery since late 2009. Although the retail sector is still experiencing negative absorption nationally, rent decline is slowing and vacancy is stabilizing at about 11 percent over the past two quarters. We continue to see bifurcation in retail—necessity and high-end retailers doing well, while middle retailers are being squeezed. The National Retail Federation forecasts a modest gain of 2.8 percent for the coming holiday shopping season.

Capital markets remain relatively strong with transaction volume increasing and the sales pipeline expanding. Investor demand is also bifurcated—very strong for high-quality assets in both debt and equity markets, but less so for non-strategic assets/markets. Private core returns have been compressed over the past 18 months, but remain relatively attractive compared to treasuries, corporate bonds, and REITs. While transactions for non-strategic assets in secondary and tertiary markets slowed significantly as some investors hesitated and lenders retreated, class-A assets in primary markets still, by and large, can obtain attractive financing from a wide range of lenders, including life insurers, commercial banks, and foreign institutions.

The 2011 NCREIF Property Index (NPI) total return through Q3 is 10.9 percent. Looking ahead, we are forecasting strong total returns for the NPI index in 2012-2015, driven by both capital appreciation and rising income return. As more investment capital flows into the commercial real estate sector, we expect cap rates will continue to drift downward over the next few years, albeit at a slower pace. While economic uncertainties remain, our view is that the commercial real estate sector will continue to recover along with the U.S. economy. We expect the delivery of new supply to remain at very low levels for at least the next three years, setting the stage for a potentially rapid recovery in commercial property fundamentals when we experience sustained demand growth.