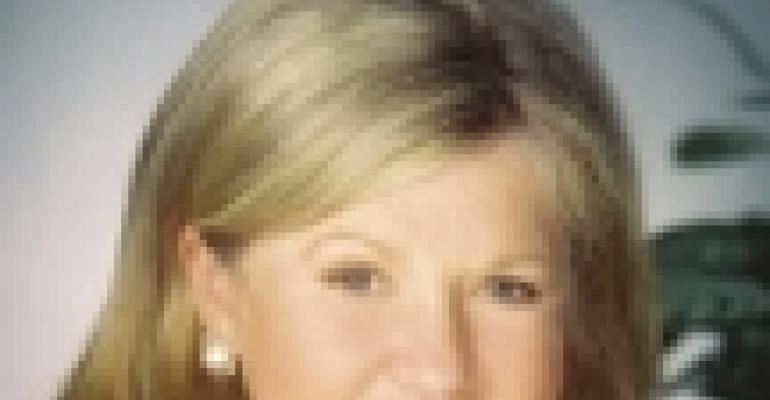 “So many women get parked at the vice president level and they never make it out of that box,” says Ayers, who plans to create a pilot training program for 50 executives with the help of sponsors.

Helping women climb the corporate ladder isn't her only goal. She hopes to identify other barriers and overcome them. Ayers oversaw the release of CREW Network's first industry benchmark study in 2005, measuring the status and achievements of women in commercial real estate. The organization has become the main source for research on women in commercial real estate, according to Cornell and other universities. In late October, CREW will release an updated status report on the industry.

Another of Ayers' goals is pay parity. Both men and women were affected by the recession and downsizing over the past three years, says Ayers. Women only earn 83% of what male colleagues earn on a dollar-for-dollar basis, however. “How can that be? We should have equality and parity today,” says Ayers.

“People ask us all the time why there should be a need for an organization that addresses women's parity and business networking. This is a male-dominated industry and women do not have the same access to networks that many men do.” Many men have helped women in their career paths, however, she says. “Men are wonderful mentors to women.”

In August, CREW rolled out an online networking system called CREWBiz, a directory for members and bulletin board for deals. Under her guidance, CREW has formed corporate partnerships in which companies sponsor key programs. “Our corporate partner for doing industry research is CB Richard Ellis. They step up every year and give me enough money to kick off [the research].” She declines to specify the amount provided.

The assistance is gratifying, says Ayers. “I am trying to move this organization forward and to highlight the talent that these women have.”