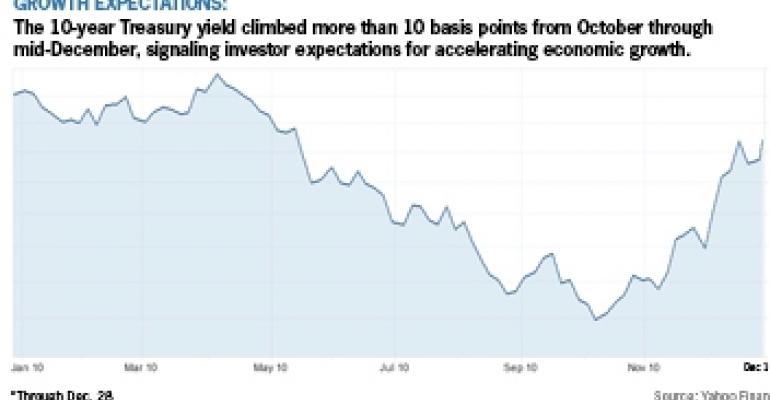 Ross Moore has changed his outlook for the better in these last few weeks of 2010.

“With the exception of housing and unemployment, most of the signals I’m seeing are positive, which does suggest pretty good growth next year,” says Moore.

In particular, the 10-year Treasury yield reversed a year-long decline. It climbed to 3.5% on Dec. 15, up more than a percentage point from the 16-month low of 2.4% on Oct. 8. The critical benchmark for commercial real estate lending has since come down slightly and stood at 3.3% on Dec. 21, but is still well up from the recent low.

To Moore, that change signals that investors are expecting stronger performance from the economy than they were just a few months ago. “I look at that rise in 10-year rates as a barometer of future economic growth,” he says. “That may lead to inflation, but I don’t see it as a direct response to investors’ read on future inflation – I’m very much in the glass-that’s-half-full camp.”

The jobs dilemma
What could be giving investors the notion of better days ahead? Probably not November’s employment growth. With only 50,000 new jobs in the private sector, hiring failed to prevent an increase in the unemployment rate to 9.8%.

Then again, employment is on an upward track despite the disappointingly slow pace of recovery. The Bureau of Labor Statistics revised September’s job losses from 41,000 to a less-daunting 24,000, and revised the October numbers to a gain of 172,000, up from the previously reported 151,000 jobs. Employment has grown by an average of 86,000 jobs per month Since December 2009.

Other indicators portray a nation getting back into business. U.S. manufacturing activity expanded in November for the 16th consecutive month, according to the Institute for Supply Management. Consumer spending increased at an annualized rate of 2.4% in the third quarter, up from 2.2% in the previous quarter and 2.0% in the third quarter of 2009.

“When the economy is back on track, when private sector jobs are being created and when there’s a more optimistic outlook, that has to be good for borrowers,” says Moore. “So I can only be more optimistic based on what we’ve seen the last four to eight weeks.”

Other commercial real estate economists – including Hessam Nadji, managing director of research and advisory services at Encino, Calif.-based Marcus & Millichap Real Estate Investment Services – are calling for modest improvement in the property market in 2011. He doesn’t expect strong performance from the sector until job growth accelerates and boosts demand for space, however.

“Nonetheless, job growth is expected to improve next year from one million in 2010 to two million by year-end 2011, which puts us closer to long-term average growth rates,” writes Nadji in his 2011 Investment Outlook report, published earlier this month. “This moderate improvement will be enough to sustain the ongoing recovery in the apartment market and spark occupancy gains for industrial, retail and office properties.”

Spreads Draw Investors
Investment activity has rallied this year to ring up $168 billion in sales, 60% more than the 2009’s volume, according to Nadji. That’s a little more than half way to the $287 billion in transactions the market closed in 2004, which is a good benchmark for a normal investment year, says Nadji.

Helping to drive transactions are attractive borrowing rates, thanks to the previously mentioned low long-term interest rate benchmarks and recent contraction in the spreads or extra basis points added to those benchmarks to establish interest rates on many commercial real estate loans. “In fact, there hasn’t been a better time in 25 years to invest in commercial real estate, given these spreads,” says Nadji.

At Colliers, Moore sees 2011 shaping up to be a welcome period of stability, and perhaps modest growth, for the economy and for commercial real estate investors. And much of his optimism traces back to the 10-year Treasury rate.

“At 3.5%, we’ve got an economy that’s going to post pretty good growth but very low inflation,” says Moore. “That is the ultimate sweet spot for real estate, because low inflation implies low borrowing rates and a growing economy.”