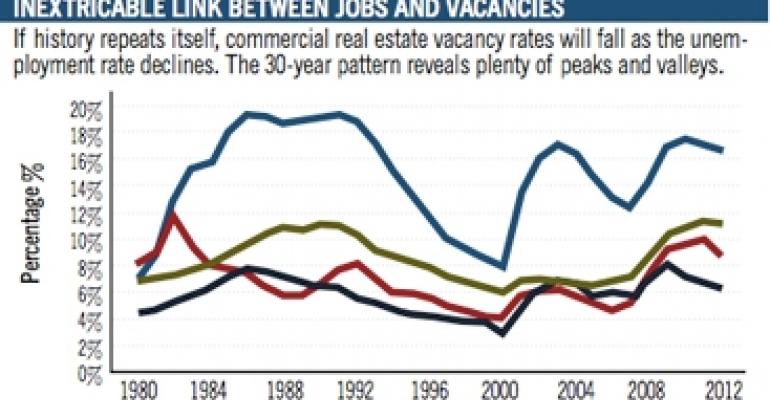 The nation’s credit markets are showing early signs of stabilizing after the long and harsh economic crisis, and deal volume across the commercial real estate spectrum is increasing. But the job market remains volatile, and until it shows greater strength, the office, multifamily and other property types will continue to suffer.

That’s the conclusion of economists from New York-based research firm Reis. The national unemployment rate in October was 9.6%, according to the U.S. Bureau of Labor Statistics, and economists project that it will creep upward in the coming months.

“Although recent employment data finally showed a reversal back to job creation instead of job losses, the amount of new jobs being created is still rather weak,” says Ryan Severino, a Reis economist. “In fact, despite the 151,000 jobs that were added [in October], the unemployment rate did not change. This is because the level of job creation merely maintained pace with the new entrants that were enticed back into the labor force.”

The market needs real GDP growth of at least 2.3% to 2.4% before the economy will create a sufficient number of jobs to reduce the unemployment rate, he says.

The pattern of office, apartment and retail vacancy rates roughly follows the nation’s unemployment rate, data from Reis and the Labor Department show. The 2010 projected office vacancy rate of approximately 17.5% represents the highest level since 1993, the period following the savings and loan crisis, says Severino. But there is one glimmer of light. “It now appears that we will not surpass the 18% threshold that we last crossed in 1992,” the economist adds.

In the third quarter of 2010, the multifamily vacancy rate fell 70 basis points to 7.1%, one of the sharpest quarterly declines on record, according to Reis. The apartment sector’s vacancy rate had already peaked at 8% in the fourth quarter of 2009.

Meanwhile, the vacancy rate for retail properties stayed relatively flat compared with the second quarter, at 10.9%. But the vacancy rate is projected to climb in 2011, as Reis maintains a negative outlook for neighborhood and community centers.

“Cap rates for apartments are leading the overall transaction market,” Severino observes. “They stabilized and began to trend downward before the cap rates of the other property sectors. Even if the apartment market experiences its typical seasonal weakness in the coming quarters, we expect the downward trend in cap rates to continue to persist.”

Both the magnitude and direction of the quarterly change in cap rates continue to be volatile, largely due to the still-depressed transactions market, says Severino. However, the improvement in apartment fundamentals over the year could mean that cap rates will become less volatile, since the link between cap rates and the performance of fundamentals is clear, he notes. “It won’t be surprising to see a stabilization in cap rates.”

Meanwhile, the mean cap rate for office properties decreased in the third quarter by a dramatic 90 basis points. As with apartments, the drop represents the largest quarterly decline since Reis began tracking cap rate data. However, in the office sector, where relatively few transactions have taken place, the market has shown great volatility.

The 12-month rolling cap rate indicates, however, that cap rates for the office market appear to have peaked during the first quarter. Office fundamentals, however, have not yet improved nationally. One reason for the disconnect between an apparent peak in cap rates and the performance of office fundamentals may be the segmentation in the market. Office fundamentals differ significantly depending on the location, including cities and whether a property is based in a central business district.

When it comes to office transactions, properties in the central business districts had higher deal volumes, according to Severino. “Once we view the transaction market from this point of view, the change in cap rates that we continue to observe makes sense.”

A number of investors, analysts and lenders are noticing that the pace of transactions has ramped up. Deal flow has grown rapidly in the third quarter, says David Rifkind, managing director of commercial real estate investment banking firm George Smith Partners. In the third quarter, the firm increased the number of closed real estate financing transactions by more than 400%, says Rifkind.

“It is simply not possible to ignore this kind of uptick in the level of activity,” he says. “There is capital in the market willing to transact and we are beginning to have price discovery in core markets.” Banks have raised capital, Rifkind says and lenders now have more clarity on lending policy.

“When combined with low, declining interest rates, these are the same ingredients that have turned markets around in the past.”