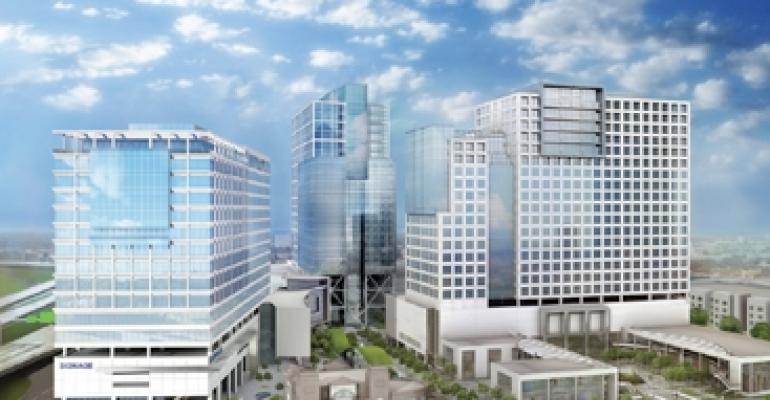 Developers Race to Build in Dallas, But Financing Remains a Wild Card

Despite a vacancy rate of nearly 29% in downtown Dallas, four developers are jockeying for position to build new office towers. With the leases of many of downtown’s largest office tenants such as legal and accounting firms up for renewal in the next few years, developers are eager to gain a foothold now.

One estimate by Dallas-based Billingsley Co., one of the developers hoping to build new space, finds a possible 7.2 million sq. ft. of leases up for renewal from 2012 to 2015. “It will be a race to see who can tie up these tenants that are currently in the market,” says Michael Caffey, senior managing director of CB Richard Ellis in Dallas.

Those downtown tenants have two main options: remain in their existing space, or move to one of the planned new buildings in the $600 million downtown Arts District or in nearby Uptown. This area on the northern fringe of downtown Dallas has been given new life in recent years thanks to the completion of several major entertainment venues.

However, many knowledgeable observers argue that more office space is exactly what Dallas doesn’t need at this point. According to Cushman & Wakefield, the overall downtown vacancy rate was 28.8% at year-end 2010.

“When you see a market with a nearly 30% vacancy rate, it would tell you it’s probably not a good time to develop anything,” says Johnny Johnson, a partner with brokerage services firm Cassidy Turley.

Ultimately tenant demand will drive any new building that occurs. The jury is still out on whether there are enough professional services firms in the market that could realize substantial energy and space efficiencies by moving to more modern space. Also key to any move is a firm’s ability to attract and retain employees based on a host of on-site amenities, including more convenient, cheaper parking.

Throughout the recent national recession, the local unemployment rate, though still high, has remained under the national average, standing at 8.5% in January 2011 versus the national average of 8.9%. According to the U.S. Bureau of Labor Statistics, the Dallas-Fort Worth metroplex added 47,400 new jobs from January 2010 to January 2011, ranking it among the top three U.S. cities with the most job growth in 2010.

Given her recent track record, Lucy Billingsley, daughter of legendary developer Trammell Crow, appears to be the most poised to drive a new office tower down the homestretch. Her Billingsley Co. finished the first office tower to be built in the Arts District, One Arts Plaza, in 2008.

The 300,000 sq. ft. building is fully leased to two tenants: 7-Eleven and law firm Thompson & Knight, and she sees an opportunity to replicate that success in a new building.

Billingsley has announced plans for two more office buildings on the 10-acre campus, and she looks to have the funding in hand to start a second tower, known as Two Arts Plaza.

Sensing the recent interest by hungry investors to buy trophy office properties, in early 2011 Billingsley put One Arts Plaza on the selling block, and plans to use the proceeds to finance construction of the new building.

Though no formal announcement has been made, Craig Hall admits he is seeking a sufficient number of tenants to kick off his own downtown edifice. Hall, chairman of Hall Financial Group, a Frisco, Texas-based investment and development company, is planning a building of nearly 500,000 sq. ft. on a prime site he has owned for the past 15 years in the Arts District.

Hall purchased the site along Ross Avenue in 1995 after an ill-fated, grandiose venture by Canadian developer Metropolitan Structures to build twin 50-story skyscrapers fell through.

Thanks to a joint venture between the City of Dallas and Metropolitan Structures, an Arts District parking garage is all that remains of those plans, a stark reminder of the build-at-all-cost mentality that gripped the city’s office market in the mid-1980s.

Hall intended to build his own tower, but delays in constructing a new performing arts center across the street derailed those plans. Last year’s opening of the AT&T Performing Arts Center helped jump-start Hall’s plans.

“Right now we think the timing is pretty good to do a building. We have some advantages over other people,” emphasizes Hall, referring to the parking garage, performing arts venues and the overall location. “But even with our advantages, it’s still a tough market to get financing.”

The general consensus among local real estate brokers is that the Billingsley and Hall buildings have the best chances of getting built in the next wave of construction, if they can achieve at least 50% pre-leasing from the downtown tenants now in the market. But waiting in the paddock are two other strong contenders.

In March, Dallas-based Harwood International unveiled detailed architectural plans for its own project, a 29-story, $130 million mixed-use high-rise as part of its existing 17-block development north of downtown.

In early 2010, Harwood lured Dallas law firm Winstead PC from Renaissance Tower in the core of downtown to eight floors in a 10-story office building it developed in Uptown. The move is expected to take place in January 2013.

All of these firms agree that kicking off any new office building will require 50% pre-leasing. “We aren’t desperate to build,” says Billingsley. And so the race is on to carry the first tenant across the finish line.

“For a new 400,000 sq. ft. building, you don’t have to capture a lot of the available tenants that are coming to the market,” says Michael O’Hanlon, president of Billingsley Co. “You can kick it off with two tenants and finish it with three.”

That fact alone has many believing that development of new office space downtown is inevitable. “We believe we could see the biggest building boom in that area since the 1980s in that 2014, 2015 and 2016 timeframe,” says Brad Selner, a managing director with Jones Lang LaSalle in Dallas.

Selner notes that if tenant demand for new buildings pans out, the most likely financial backers for new construction are local and regional banks, along with insurance companies.

Unlike the go-go 1980s, when speculative construction was rampant, most observers agree that a purely speculative enterprise, with no pre-leasing, is not a viable option in today’s market.

“No one is going to do a speculative building, period. And no one will ever build another 1 million sq. ft. building here because you can’t get enough tenants to make it economically viable,” says O’Hanlon.

The largest office buildings in Dallas were primarily built in the 1980s near the traditional Main Street core. But today most local real estate pros believe the “new” Main Street has shifted several blocks to the north to Ross Avenue, which forms the southern boundary of the Arts District.

“There continues to be wonderful product south of Main Street, but the trend for the professional service firms that have historically been in the downtown area has been to migrate to the north, and in most cases to Ross and north of Ross,” says Caffey.

The secondary tier of older office buildings located throughout the downtown core present challenges to their owners. Many local brokers believe much of this stock will struggle to retain its existing tenants, and will likely be converted to residential use or eventually demolished.

In March 2011, Younan Properties retained Transwestern to lease two buildings it owns in the heart of downtown Dallas. They include the 34-story KPMG Centre, completed in 1980, and the 30-story Patriot Tower, completed in 1979.

Jack Eimer, president of the Southwest division of Transwestern, believes the older stock of office buildings in the downtown core has a pricing advantage over any potential new developments.

“It will be difficult for these newer buildings to attract a large tenant. Going from the middle-teens to $35 a foot, that’s a sizeable increase in the cost to run your business,” says Eimer.

He also points to recent tenant renewals as hopeful signs to downtown landlords that their tenants will stay put. Law firm Thompson Coe recently renewed its lease for 72,000 sq. ft. at the Plaza of Americas in downtown. “That is the type of tenant these new buildings need to feed off of,” notes Eimer.

“Right now we have the most positive feeling about downtown that we’ve had in a long time,” notes Duane Henley, managing director at Transwestern.

Some of that optimism stems from potential relocations by companies outside the city and state. “The list [of interested candidates] is surprisingly long right now. Though some have stated a preference for a suburban location, the majority have not. I think there will be some reasonable candidates for downtown,” says Eimer.

Also, the lack of lease expirations in the past three years has kept the overall downtown office market dormant. “We’re coming out of that in the next 15 to 18 months,” says Henley.

That situation is about to change, but any new construction appears to be measured. “We are close enough to the market to know when it’s risky or not,” says Billingsley. “You know when the time is right to deliver a successful building, not only for your own portfolio but for the city.”

Ben Johnson is a Dallas-based writer.

Bridging the divide in downtown Dallas

For decades the Woodall Rodgers Freeway bisected the northern edge of downtown Dallas, creating what many local pundits term a “moat.” Due north of the freeway lies Uptown, an area first created in the 1980s. Many of the office and retail developments there proved to be ahead of their time, including The Crescent, a 1.2 million sq. ft. mixed-use complex developed in 1985.

Today many local real estate pros consider Uptown and Downtown as one nearly merged market. Helping to bridge that divide is a new five-acre park under construction over the Woodall Rodgers Freeway. It is set for completion in 2012.

“It’s been almost a psychological barrier, but the park will establish downtown and Uptown as one clear market as opposed to the separation that exists today,” says broker Johnny Johnson of Cassidy Turley.

In recent years, the Uptown office market experienced a major renaissance. According to Johnson, seven new Class-A office buildings with 2.6 million sq. ft. were constructed in Uptown in the past five years and have leased surprisingly well, averaging around 80% occupancy.

Many of those projects successfully lured prime law firms away from their cozy, but older, downtown buildings. CB Richard Ellis, the behemoth global real estate services firm, made waves in 2010 when it announced it was moving from its Dallas office located on the I-635 northern perimeter freeway to 2100 McKinney in Uptown. The move consolidated its regional offices into one large 63,000 sq. ft. floor.

“We are very supportive of being part of the core. The fact that we were able to find a building that really fit our needs helped solidify the decision,” says Michael Caffey of CB Richard Ellis. “Dallas has historically been the poster child for suburbia, and there is a realization that Dallas needs a strong core to continue and maintain its prominence as this regional business center.”