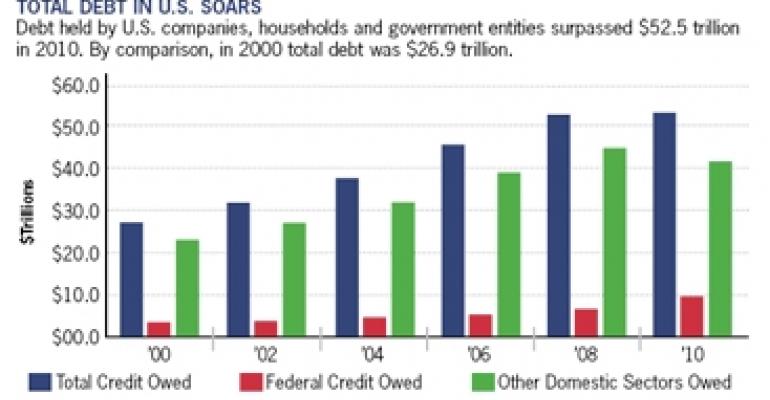 Americans need to stop living beyond their means, both in government and their personal lives. For decades, we have spent and consumed much more than we produced, borrowing the difference from abroad.

So in 2010, our negative trade balance of payments exceeded $8 trillion and our total federal debt outstanding was almost $9.5 trillion – 65% of gross domestic product (GDP). The Federal Reserve estimates that the total debt of American companies, households and governments has surpassed $52.5 trillion.

The biggest threat to our economic future lies in the three major entitlement programs of Social Security, Medicare and Medicaid, all of which will expand to claim more federal dollars as our population ages. These three funds and other mandatory spending consumed 10% of GDP in 2010. That amount is expected to rise to 12% in 2021 and approach 16% in 2036.

If federal outlays rise as forecast by the Congressional Budget Office, those major entitlements will increase from about 4% of federal spending in 2010 to 49% in 2021, forcing all other government activities to cut back sharply.

There has been much talk about the nation’s deficits and debt recently, but a major obstacle to coping with future entitlements is that most Americans cherish their entitlements and other federal benefits.

In recent Gallup and Pew polls, 60% of voters indicated that maintaining entitlement programs at current levels was more important than reducing federal deficits. And many U.S. households and businesses receiving tax subsidies and other government benefits strongly resist having them reduced — even in order to lower deficits.

Motorists want low gasoline prices, so they oppose increasing gasoline taxes. But that tax is too low to maintain the nation’s roads and bridges. Unionized government employees want to keep receiving higher benefits than their private-sector counterparts, although many states cannot keep funding such benefits.

Because more than 60% of U.S. households own homes, it is politically impossible to end the mortgage interest deduction. But the National Association of Realtors even opposes shifting the deduction to a tax credit, which would provide the same benefit per dollar of mortgage interest paid, regardless of the owner’s tax bracket.

This widespread desire to keep special benefits unchanged is affecting both political parties. Democrats are reluctant to cut entitlements. Republicans refuse to consider raising taxes. But most economists and budget analysts say revenue increases are crucial. Apparently, most Americans won’t accept reductions in government programs that benefit them.

In the past, millions of Americans made sacrifices when challenged. Examples are 1776, the Civil War, the period following the attack on Pearl Harbor, the Civil Rights movement, and most recently 9/11. To avoid a worsening economic crisis, more of us must be willing to accept some austerity. Unfortunately, few elected officials grasp that necessity.

It will take a major attitude shift among our leaders to convince most Americans they cannot keep living on money borrowed from abroad or taxes paid by other citizens. Those millions who remain unemployed, or are fighting overseas, are already making sacrifices. The rest of us should be willing to make sacrifices to prevent our economic situation from getting worse.