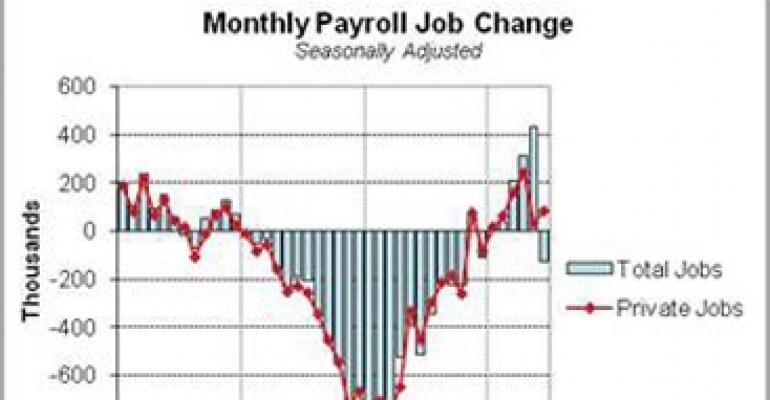 Call it a June swoon for the U.S. labor market. Total nonfarm payroll employment declined by 125,000, raising concerns about a delay in the recovery of the troubled commercial real estate market. The setback marks a stark contrast from May when payroll employment swelled by 433,000 due largely to the hiring of 411,000 temporary Census workers.

How much of a hole does the U.S. labor market find itself in at the moment? Well, consider that through June of this year, private-sector employment has increased by 593,000, but is still 7.9 million below its December 2007 level.

The good news is that the unemployment rate fell from 9.7% in May to 9.5% in June, but economists are quick to point out that this was largely because 652,000 workers dropped out of the labor force, reducing the labor force participation rate from 65% to 64.7%. More people became discouraged and stopped looking for work.

Meanwhile, average hourly earnings and the average length of the workweek were unchanged in June, indicating that incomes have been slow to ramp up.

NREI caught up with three respected real estate economists to get their reaction to last Friday’s jobs report and what it means for commercial real estate.

Victor Calanog, director of research, Reis: “We expected this recovery to be slow and weak, but now it's sinking in just how tough of a grind it may be. Not long ago, the White House expected jobs to grow by 195,000 per month through 2010. The actual average monthly gains for private-sector hiring are approximately half that amount, or slightly more than 99,000 per month for the first six months of the year.

“It is useful to note, however, that job growth tends to occur in fits and starts. After the last recession ended in late 2001, job growth was negative for 15 out of the following 21 months until the economy began posting consistently positive results in October 2003. Still, given upheavals in the international economy, it is worrisome how domestic numbers continue to fall below expectations, appearing woefully bereft of good news.”

Bob Bach, chief economist, Grubb & Ellis: “The June report reveals a labor market that is expanding slowly, and it confirms other recent economic reports on retail sales, manufacturing and housing showing that the recovery has lost some momentum. The reasons for this include European debt woes, the waning effects of the stimulus, lingering caution on the part of both businesses and consumers, and severe deficit problems in state and local governments.

“The odds of a double-dip recession have increased. The question is being asked more frequently in the current environment than it was a few months ago, but the jury is still out. If the economy continues to lose momentum, then a double dip is more likely. But if the economy can stabilize, even at this lower level, the recovery will remain intact. We’ll know more over the next few weeks.”

Hessam Nadji, managing director of research services, Marcus & Millichap: “My biggest concern is that private-sector hiring is not gaining enough traction. The risk of a double-dip recession has risen mainly due to a renewed loss of confidence spurred by the EU (European Union) debt crisis, a proposed premature wide-scale austerity plan that is a sure early-recovery killer, and a sharp reversal of the yield curve, which is most concerning of all. [The spread between long-term and short-term U.S. Treasury yields has narrowed considerably of late, which tends to foretell slower economic growth.]

“This means that the commercial space recovery is delayed. The bottom will still occur in 2010, but recovery is pushed back well into 2011. Apartments are the exception. They are getting even more traction than the first quarter of 2010.”