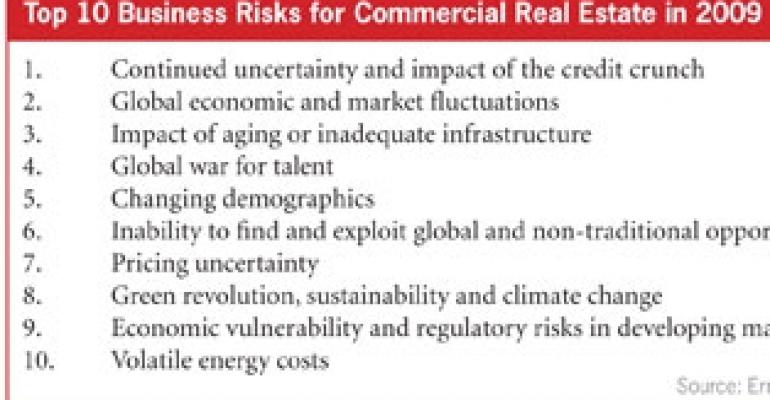 While infrastructure has been touted as the next great opportunity for commercial real estate investment, there’s one big stumbling block: The inaccessibility of credit has turned a potential boon into a heightened business risk, according to newly released report by Ernst & Young (E&Y) that highlights global business risks for commercial real estate.

E&Y ranks the impact of aging or inadequate infrastructure as No. 3 out of the 10 biggest issues confronting the industry, climbing three notches from last year. “Owing to the inaccessibility of credit and the skyrocketing costs of materials needed in construction, infrastructure budgets have tightened and the implementation of many new initiatives has been delay or canceled,” writes E&Y.

It’s no surprise that the No. 1 business risk listed in the report is continued uncertainty over a nearly two-year-old credit crunch. “Everyone in the real estate space is continuing to deal with the credit crunch and how it will impact their business, particularly in light of significant debt in the CMBS market that is up for maturity in 2010 and 2011,” remarked Troy Jones, principal in E&Y’s transaction real estate practice during an interview today with NREI.

Despite the laser focus on capital markets, Jones cautions investors not to lose sight of a worldwide shift in demographics, which rank No. 5. “At the moment we are solely focused on the capital markets, but that will solve itself over the next 12 to 18 months. The real driver over the next 10 years is demographics,” notes Jones. A lack of understanding on this front will place companies at a disadvantage if they hope to exploit emerging trends.

The shift in demographics moved up from No. 13 on last year’s ranking, primarily due to the aging population in the West and the rise of the middle class in many developing countries. “Shifting demographics will determine what will be built, where it will be built and how it will be funded,” according to the report.

For instance, to meet the needs of aging baby boomers, more seniors housing will be needed. To match the tastes and needs of the twenty-something generation, student housing will grow in demand.

Despite the immediate and long-term impact of demographics, the second greatest risk facing the industry in the near-term is global economic and market fluctuations.

“Hard-hit areas, such as finance, hospitality and homebuilding are responding to the risk through consolidation and reductions of their cost bases,” reports Ernst & Young. However, for some, these shocks can create opportunities, the report maintains.

“Most of our clients with portfolios of real estate assets and ongoing capital programs are making tough decisions in terms of rationalization or cost reduction to stay competitive,” said Malcolm Bairstow, global leader of E&Y’s real estate advisory services group.

Some of the steps companies can take to respond to these economic and market fluctuations include structuring transactions to take advantage of the tax and accounting regulatory advantage, implementing a comprehensive due-diligence process and selecting the right local partners.

The fourth greatest risk for 2009 is the global war for talent. As the working population around the globe ages and retires, companies will need to formulate solid hiring and retention policies to get ahead of the curve.

Pricing uncertainty came in at No. 7 in the rankings followed by the green revolution in the No. 8 slot, and economic vulnerability and regulatory risks in developing markets in the No. 9 position. And finally, volatile energy costs fell in the No. 10 slot of business risks facing commercial real estate community.

“The green revolution is more on the business-to-consumer side where the consumer is expecting the industry to be more green conscious,” explains Jones. Volatile energy prices, while part of the green revolution, are directly tied to operations and cost savings, he says.