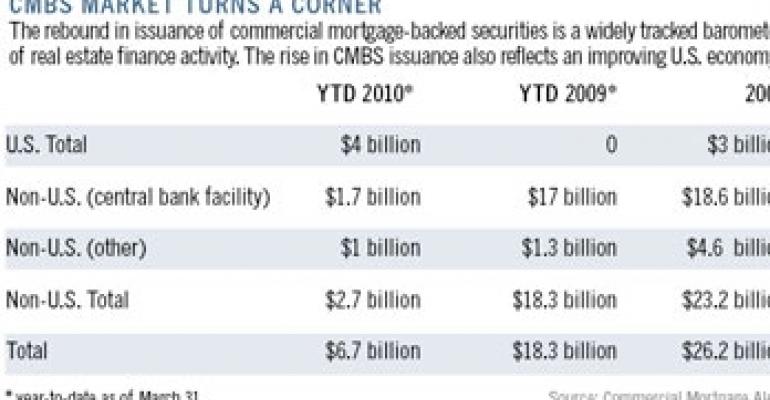 Scarce capital no longer to blame for investors&#8217; indecision.

Not only have signs of life returned to commercial real estate finance, but there are also signs that the capital markets are on the mend. As 2010 began, analysts called for about $20 billion in new issuance of commercial mortgage-backed securities (CMBS). But by the beginning of the second quarter, those estimates rose to $25 billion, and may rise even further.

CMBS issuance is a major barometer of real estate finance because it is one of the most orderly and low-cost funding sources available. With the winding down of the Term Asset-Backed Loan Facility over the next two months, investors are looking to CMBS for stable government-free opportunities.

In 2009, Glimcher Realty Trust struggled to refinance a number of its shopping centers in Tennessee and Ohio. Recently it received a $100 million loan package and will sell its refinanced loans into the CMBS market.

In addition to well-received CMBS issues by Wells Fargo’s Wachovia unit and Bank of America’s Merrill Lynch unit, Dutch property investment fund, Vesteda, launched a $471 million CMBS issue. With this transaction the Dutch market reopened to its first issuance since virtually shutting down in 2007.

Many investors are no longer fearful of losses from souring real estate-backed investments or rising interest rates, and now have an insatiable appetite for higher yields. Greed has replaced fear as the main motivator for property investors and the keepers of the lending purse.

Commercial real estate values have edged up 6% in the last four months, according to Real Capital Analytics, after falling a whopping 45% from 2007 to 2009. With asset managers, including special servicers, working overtime to work out troubled loans, the window may be closing for investors hoping to find steep discounted deals.

The latest buzz phrase among scavenger investors and the sales representatives they engage is “off-market transactions”, or distressed properties and notes that haven’t been shopped around. Investors are now frantically seeking these transactions, and even have multiple solicitation postings on social networking sites.

As a sign that lenders are salivating over a faster market recovery, Los Angeles-based private equity real estate firm Mesa West Capital recently provided a $44 million, five-year first mortgage to CB Richard Ellis Investors. The property is 500 North Brand Boulevard, a 22-story, 420,000 sq. ft. office building in Glendale, Calif. One year ago, this loan would have been unthinkable.

CB Richard Ellis Investors bought the property for $71 million in cash more than a year ago. Not only was the building just 75% occupied at the closing of the loan, but Mesa West Capital (a short-term, high-yield lender) also will allow the borrower to prepay the loan after just two years, anticipating that the borrower will find a lower-cost refinancing package such as a CMBS loan.

Who will blink first?

Capital earmarked for real estate and not yet deployed is causing some buyers to become anxious. Owners unwilling to sell at fire-sale prices create growing speculation that buyers will blink first in the two-year standoff.

Investors who are still patiently awaiting an ideal entry point into distressed real estate may soon have to abandon that strategy. According to some speakers at the recent Urban Land Institute spring conference in Boston, many distressed deals are not even making it to market. Instead, investors are picking them off as coveted off-market transactions to avoid stiff bidding competition.

Yet the primary reason the current sea of capital is finding fewer distressed deals than anticipated is that banks and other debt holders did not panic and sell loans or properties into a weak market. There is no Resolution Trust Corp. to unload a ton of assets at steep losses.

So greed now officially rules, and the pressure is on for investors who fear missing the commercial real estate recovery boat to act soon. Lenders are resurfacing with a vengeance for high yield. To be sure, once the estimated $150 billion of uninvested capital reaches the market, prices will likely increase more swiftly and less orderly than the relatively controlled two-year price consolidation the industry has experienced.