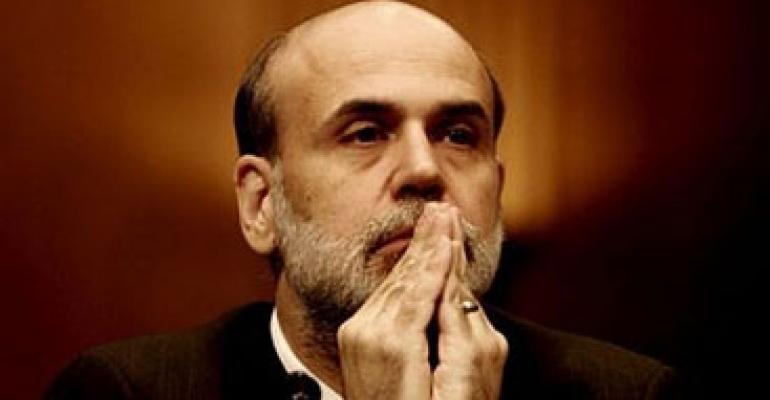 The Federal Reserve’s announcement Tuesday that it will hold down long-term interest rates by buying debt acknowledged a slowdown in the economic recovery, but lowered fears of a double-dip recession, experts say. For the real estate industry, the plan may provide the additional benefit of boosting the appeal of commercial mortgage-backed securities (CMBS) over other fixed-income investments.

“The Fed is saying it is going to use every tool in its toolbox to help support the recovery,” says David Rifkind, managing director of Los Angeles-based real estate investment banking firm George Smith Partners. “It was a conservative, measured and clear statement. That’s exactly what the market needed to hear.”

Typically the Fed limits its interest rate changes to short-term rates that it sets directly, including the Fed funds rate, which banks use to charge for overnight lending. But this week the Federal Open Markets Committee left the Fed funds rate unchanged at less than 1% and announced a plan to hold down long-term interest rates. The Fed intends to reinvest the payments of principal it receives on its extensive portfolio of mortgage-backed securities and government debt, buying up additional U.S. Treasury bonds to maintain its current level of investment.

Since early 2009, the Fed has purchased some $1.25 trillion in mortgage securities, $175 billion in Fannie Mae and Freddie Mac mortgage debt, and $300 billion in U.S. Treasury bonds in an effort to boost liquidity and stimulate the economy with price stability. By rolling over those investments into Treasuries, the Fed will keep the supply of available bonds in check and thereby keep interest rates near their historic lows.

Beyond the obvious effect of keeping borrowing costs down, the Fed’s move will give commercial real estate and commercial mortgage-backed securities a shot in the arm by suppressing yields on competing fixed-income investments, Rifkind says.

The Fed’s statement this month sought to ease fears of a double-dip recession by showing that the government remains vigilant to keep the economy on an upward track, according to Robert Bach, chief economist at commercial real estate services firm Grubb & Ellis.

Consumers and businesses needed reassuring following two months of disappointing jobs reports. Private-sector payroll employment rose by 71,000 in July, according to the Bureau of Labor Statistics, but that couldn’t offset a wave of government job cuts that resulted in a net loss of 131,000 payroll jobs for the month. That drop follows the loss of 221,000 nonfarm payrolls in June.

Knowing that the Fed is working to invigorate the economy is especially helpful right now while political differences on Capitol Hill make it unlikely that Congress will enact further economic stimulus measures anytime soon, Bach says. Some lawmakers support new stimulus spending, some are bent on reducing taxes, and others are more concerned about controlling the deficit and oppose both stimulus spending and tax cuts.

“Between those three groups, there’s not enough of a consensus to act,” Bach says. The Fed’s statement is “a recognition that Congress is unlikely to do anything dramatic in the way of stimulus. The Fed is the only player in town right now.”

Will the double-dip recession materialize? Bach doesn’t think so. Taken as a whole, the economy is on the slow expansion track he forecast more than a year ago when he projected the addition of 1 million jobs in 2010. Despite the recent monthly losses, the private sector has 630,000 more jobs today than it did at the first of the year, according to the labor department.

The economy has gained enough momentum to avoid relapsing into a recession, Bach points out, but it’s nice to know that the Fed acknowledges the recent slowdown and is taking action. “The economy that looked so promising earlier in the year has not proven itself to be self-sustaining,” he says. “The Fed is putting the training wheels back on.”