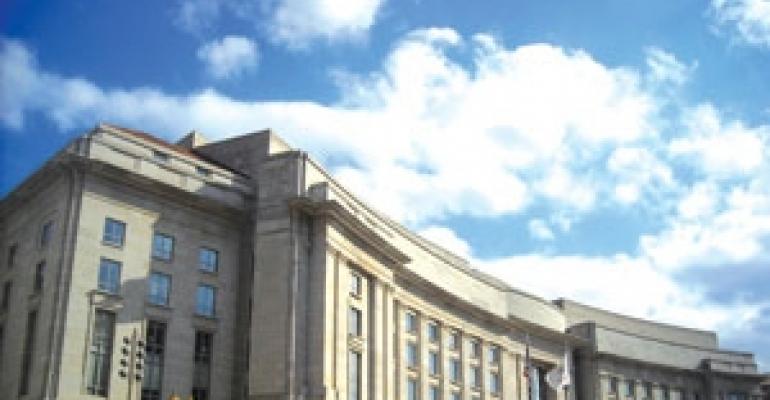 Federal Agencies May Be Forced to Reduce Their Footprints

If the General Services Administration had a theme song, it would be David Bowie and Queen’s 1981 hit “Under Pressure.”

The GSA, which handles the real estate-related needs for all federal agencies and serves as the government’s landlord, is feeling the heat from budgetary constraints, pending legislation and increasingly angry taxpayers—all of which are forcing the organization to make smarter and more cost-effective decisions.

And that pressure may only grow depending on what emerges from the so-called Super Congress that was charged with issuing a recommendation by Nov. 23 for at least $1.5 trillion in deficit reduction steps to be taken over the next decade.

“This is the first time that I have seen the GSA under so much pressure from so many sources,” says Chris Roth, managing director for Jones Lang LaSalle Americas Inc., who leads the group responsible for GSA leasing. “In a way, the GSA is in the middle: They are trying to meet the requirements [of the various agencies such as the IRS and the FBI] in this world of new legislation, lower budgets and taxpayer demands. I think the GSA welcomes the pressure because it wants to be more effective, but it doesn’t have the authority to tell the agencies what to do—that’s what Congress does.”

In June 2010, President Obama issued a memo to agencies directing them to save $3 billion through fiscal 2012 by disposing of excess property and consolidating leased space. Meanwhile, the federal building fund—the revolving pool of funds the organization uses to maintain property, pay rent and manage its construction and renovation projects—was slashed nearly 20 percent to $7.6 billion in 2011 from $9.1 billion in 2010.

The U.S. government is the nation’s largest asset holder, managing 896,000 buildings and structures with a total area of 3.29 billion sq. ft. and more than 41 million acres of land. The GSA, which acts as the federal government’s landlord, owns or leases 9,600 assets and maintains an inventory of more than 362 million sq. ft. of space, according to a report issued by the Republican leaders of the House Transportation and Infrastructure Committee.

The committee, which oversees programs addressing the federal management of emergencies and natural disasters, agencies and programs promoting economic development and federal real estate programs, has the power to approve federal leases arranged by the General Services Administration.

The report, entitled “Sitting on Our Assets: The Federal Government’s Misuse of Taxpayer-Owned Assets,” was prepared by the committee’s minority staff and released by its ranking members. It identifies $250 billion in potential savings through improved management of federal assets and the elimination of waste in agencies and programs under the committee’s jurisdiction.

To that end, Congressman Jeff Denham (R-Calif.), a member of the House’s Transportation and Infrastructure Committee and chairman of the Economic Development, Public Buildings and Emergency Management subcommittee, has introduced the Civilian Property Realignment Act.

Known as H.R. 1734, the legislation was introduced in May 2011. Denham has promoted the bill as a tool to reduce waste, increase the efficiency of the federal government and produce significant savings for the taxpayer. Similar to the Base Realignment and Closure Act, it would establish a framework to review federal properties and make recommendations for consolidations, co-locations, redevelopment, selling or other actions.

“In a time when Congressional leaders are scrambling to find ways to reduce our $14.3 trillion deficit, the government should look at the buildings that it owns and identify the tens of thousands of empty buildings it doesn’t need,” Denham said in a statement.

In November, Denham spoke out against construction of a third courthouse in Los Angeles as an example of government waste that his legislation would address.

In 2010, the Government Accountability Office (GAO) concluded that over the last decade, 3.56 million sq. ft. of unneeded space was built in courthouses, costing $835 million in taxpayer funds plus $51 million annually in operating costs. In Los Angeles specifically, the GAO found that the addition of a third courthouse to the L.A. courthouse complex would exceed the needs of its judicial system by a minimum of 14 judges.

In addition to evaluating the use of existing federal real estate, Denham and his subcommittee are considering the creation of a standard that would limit the amount of space per federal employee for all newly leased offices. Moreover, that limit would be considerably less than previous standards spelled out nearly a decade ago.

While Denham has not disclosed the exact amount, reports indicate that the committee is leaning toward 150 sq. ft. to 157 sq. ft. per employee. That space includes administrative areas such as employee workstations and executive offices, along with common areas including break rooms, cafeterias and conference/meeting areas; it does not include hallways, lobbies, stairwells, storage space or bathrooms. Just 10 years ago, the standard space allowance per person was 200 sq. ft.

The latest leases approved by the House illustrate the new standards. For example, 1,059 employees of the State, Justice and Veterans Affairs departments will each have 155 sq. ft. feet of working space at 1800 G Street NW in Washington, D.C.

Roth notes that the GSA is not only focused on reducing the amount of space it occupies in new leases, but also is working with existing landlords to reduce its square footage on renewals. “They don’t have the budget for the same amount of space, and they want to use space more efficiently,” he explains, adding that the GSA also is choosing to renew leases rather than relocate because it costs so much money to move. “For the most part, landlords are happy to work with them because they don’t want to lose the government as a tenant. But they usually end up with a lease for less space and less rent than what they had before.”