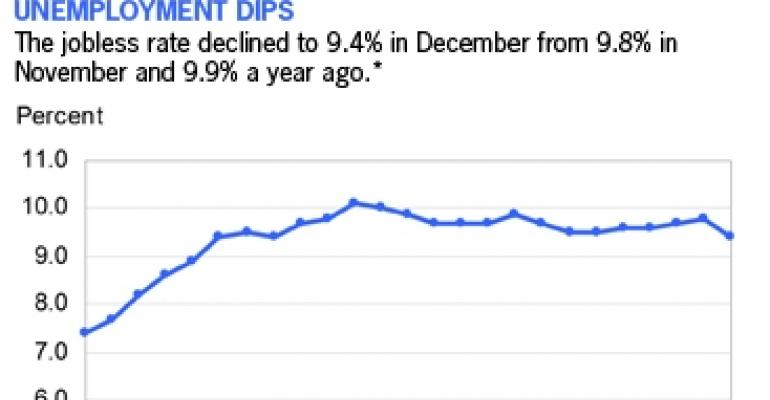 U.S. employment growth isn’t setting any records these days, but observers agree that the market is recovering. With 103,000 net new jobs in December, the U.S. job count had grown by 1.1 million since December 2009 for a monthly average increase of 94,000. Unemployment fell to 9.4% at the end of the year from 9.8% in November, according to the Bureau of Labor Statistics, which is set to release January figures on Friday.

Where economic prognosticators differ is in their outlook for hiring in 2011. According to some observers, the coming year will be a long slog of incremental job creation, with a segment of the nation’s unemployed workers never returning to work. Some economists argue against that view, however, and say employment growth in 2011 will outpace the previous year’s gains by 200%.

In the former camp is journalist Greg Ip, U.S. economics editor for weekly news magazine The Economist. Ip points out that December’s total of 139.2 million employed workers in the United States is still slightly less than the 140.2 million employed when the recession ended in June 2009.

“Employment fell by more than in any other recession and has virtually not responded whatsoever to the recovery,” Ip told business leaders on Jan. 27 in Austin, Texas. “The recession ended about a year and a half ago and employment is still below that level.” Ip delivered the keynote address at the 25th annual Austin Economic Forecast hosted by AngelouEconomics, an Austin-based economic development and site selection consultancy.

At this point in a recovery, the U.S. would normally be experiencing growth of about 6% in gross domestic product (GDP), as opposed to the 3.2% annualized growth that occurred in the fourth quarter of 2010. Ip attributes the U-shaped recovery to the fiscal crisis that started the recession.

Unlike the previous two recessions, which came about after high interest rates imposed by the Federal Reserve curtailed inflationary economic growth, the last recession occurred in a low interest rate environment. That means the Fed’s subsequent measures to lower interest rates have had little effect in stimulating growth.

The nation is recovering from the recession, says Ip, but economic growth will be slow, without a bounce-back of hiring and productivity. More than 4% of the labor force has been unemployed for more than six months, the highest rate ever, he notes. Many of those workers are losing their employable skills and won’t be able to return to work.

“A financial crisis in some sense crushes a piece of the productive capital of the country, and you can never get that back,” says Ip.

The idea that the financial crisis will retard job growth doesn’t sit well with James F. Smith, chief economist for Parsec Financial in Asheville, N.C. For one, Smith points out that research into financial crises draws chiefly from example in other nations. The United States has only had three such crises in the past century, in 1907, the Great Depression and the panic of 2009, he says. “To base your theory on three widely separated events is a huge stretch,” says Smith.

One of several economists polled by USA Today about employment expectations in mid-January, Smith is bullish on the jobs market. “I would anticipate we ought to create about 3 million jobs this year, net,” says Smith. By quarter, Smith expects to see employment growth averaging 140,000 jobs per month in the first quarter, accelerating to 173,000, 200,000 and 221,000 per month in the second, third and fourth quarters, respectively. “That’s the consensus,” he says.

Smith bases his positive jobs outlook on total job creation rather than net job gains. Rather than accelerate hiring, the nation’s employers must reduce job cuts in order to boost total employment, he says.

In the 11 months through November 2010 – the most recent numbers available – the U.S. created 50.8 million jobs, according to the Bureau of Labor Statistics. In that same period, 50 million jobs ended through layoffs, separations or terminations. “So we turned 50 million jobs to get a net gain of 800,000 jobs,” says Smith. “In a normal year we create about 54.5 million jobs and we lose about 52 million.”

Smith attributes weak employment growth in the recovery thus far to inadequate sales for small businesses, which normally account for 60% of job growth. “Small businesses haven’t been hiring for three or four years because they are miserable,” he says. “But small businesses are becoming a little more optimistic.”

Look for the biggest job gains in healthcare, tourism and education, although budget cutbacks due to tax revenue shortfalls will mean fewer education jobs than in past recovery cycles. Growth will be faster in regions that avoided housing bubbles and therefore suffered less in the recession. “There are going to be more jobs in Texas than anywhere else,” says Smith. “Texas is one of only two states that have recouped all the jobs lost during the recession, N. Dakota being the other one. That’s a pretty healthy position to be in.”