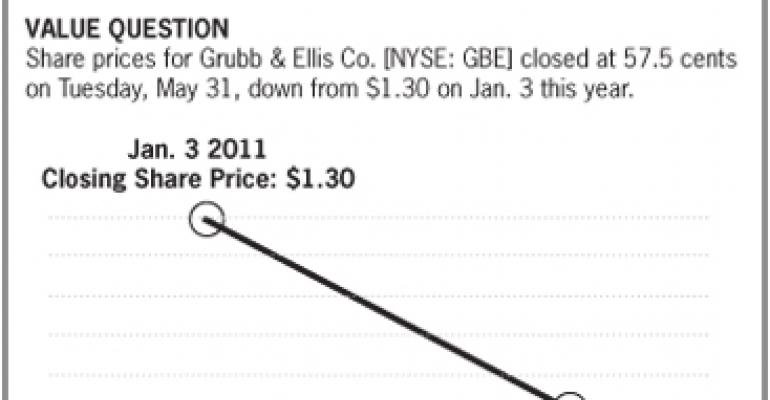 One of the most well recognized brand names in commercial real estate brokerage — Grubb & Ellis Co. — has been working on several fronts to regain profitability and improve its balance sheet. Now the embattled firm says it is free to consider new strategies while it pursues deals already on the table.

The two companies are still in discussion, but Colony Capital’s exclusivity period ended May 29. That allows Grubb & Ellis to enter talks with other potential investors or buyers.

“[Now] that we have expanded the pool of potential strategic partners, the board and management are intent on bringing the strategic process to conclusion in a manner that creates value for all of our stakeholders,” says Thomas D’Arcy, president and CEO of Grubb & Ellis, in a written statement released Tuesday.

In the same announcement, the company reported “significant progress” in its effort to sell subsidiary Daymark Realty Advisors. Daymark manages tenant-in-common programs in a 33 million sq. ft. portfolio that includes some 8,700 multifamily units.

Tenant-in-common (TIC) investments enable small investors to own an undivided fractional interest in a property. There can be up to 35 co-owners in a TIC deal.

The company created Daymark in February and retained FBR Securities to market the subsidiary for sale. Grubb & Ellis expects to complete a transaction in regard to Daymark, although it hasn’t specified a timeline for such a sale.

The company is making good progress on both initiatives, according to D’Arcy. “The market reaction to our core real estate services and non-traded REIT business — with its broad platform, talented professionals and deep client and investor base — has been very strong,” he says. “At the same time, Daymark has attracted strong interest from a range of potential buyers.”

But net income from management services hasn’t been enough to make the firm profitable in the face of operating losses in investment management and transaction services. In February, Grubb & Ellis reported a net loss $66.8 million for all of 2010 compared with a net loss of $78.8 million in 2009.

On May 19, the New York Stock Exchange notified Grubb & Ellis that the real estate company was in violation of its listing standards, which require an average market capitalization of at least $50 million over 30 consecutive trading days and shareholders’ equity of no less than $50 million.

In April, Grubb & Ellis received a similar violation notice from the NYSE, this time due to its average closing price per share falling below $1 over a 30-day period. The company is developing plans to comply with both listing standards.

This year Grubb & Ellis is attempting to jettison less-profitable business units and improve its balance sheet. Hence the creation of Daymark, which carved out the managed tenant-in-common portfolio from the larger company’s investment management division.

Grubb & Ellis picked up the managed tenant-in-common portfolio in 2007 when it merged with Triple Net Realty Advisors. The business unit reported revenue of $21.9 million in 2010, down 18% from $26.7 million in 2009. What is now Daymark reported operating losses of $6 million in 2010 and $17.5 million the previous year.

Grubb & Ellis needs a strategic buyer that can gain maximum value from the company’s platform, according to a report published March 28 by William Blair & Co. analysts Brandon Dobell and Tom Dillon.

The trouble is, few existing commercial real estate service providers large enough to afford such an acquisition would find the deal viable due to potential culture clashes and overlap with their own service lines and geographic coverage areas.

“[Among] the major potential public and private buyers, we struggle to find a likely match,” William Blair analysts wrote in their March 28 report.

A piecemeal sale of various business units is unlikely to fetch a combined price equal to Grubb & Ellis’ current enterprise value, which analysts estimate at $200 million. What is clear, however, is that the longer the company takes to find a buyer or other solution, the less valuable the company will be to a buyer.

“We believe the longer this process goes on, the more likely the value of the company’s assets is to fall, as intellectual capital can walk away from the company at any point,” write William Blair analysts.

“Competitors have likely already started assessing where the top talent in Grubb lies,” analysts conclude, “and whether it would be less expensive to buy an entire company, or unit, or simply hire away the best brokers.”